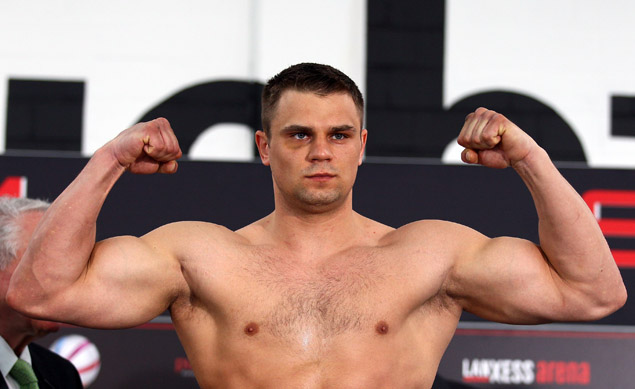 Unbeaten Russian heavyweight contender Denis Boytsov of Germany, has signed with Sauerland Events, according to the promoter’s website.

“After Denis was officially without a contract, we immediately tried to bring it to us,” said Chris Meyer, managing director of Sauerland, which picked Boytsov after his former handlers, Universum, went bankrupt.

“Operators around the world were interested to sign him, but ultimately, we are extremely happy about it that Denis has decided to join our team.”

The Germany-based Boytsov (33-0, 26 knockouts), who is 27, has rarely fought outside of that country, with only four fights beyond its borders in neighboring Austria and Belgium. Possibly his most significant win so far is a unanimous decision against Dominick Guinn last year.

“I am pleased now to be boxing for Sauerland Event. For me, it was a heart’s desire,” said Boytsov, who is expected to have his next fight in the fall. “I want to win the next battles and become world heavyweight champion as soon as possible.”

The manager of heavyweight Jerry Forrest (7-0, 6 KOs) said that the fighter will face Gerald Washington (8-0, 5 KOs ) on the Aug. 9 undercard of a heavyweight bout between Deontay Wilder (28-0, 28 KOs) and ex-beltholder Sergei Liakhovich (25-5, 16 KOs) to be televised on Showtime from The Fantasy Springs Resort and Casino in Indio, Calif.

A 25-year-old from Newport News, Va., Forrest, who stands six feet tall, is being matched against Washington, who is a 6-foot-5 and a former tight end and defensive end for the University of Southern California.

“Jerry Forrest definitely has a boxing pedigree, and he is considered a knockout artist. He’s fighting his third opponent who is undefeated, and that’s quite astonishing and, I think, amazing, considering that Jerry’s only had seven fights, and that this is his eighth. So now he’s fighting Gerald Washington, who is 8-0. Jerry is just 25, but he has been called something of an ‘0-buster,'” said Forrest’s manager, Sharif Salim, who also handles Golden Boy prospect Seth “Mayhem” Mitchell.

“That fight is definitely happening. We’re heading out for that Friday night fight. Jerry Forrest is a former two-time national champion as an amateur, and he’s undefeated as a pro. It will be a heavyweight explosion of two, young prospects coming up. Jerry’s a former gymnast, from the same neighborhood — the tidewater area — of Gabby Douglass, so he’s an accomplished gymnast who has a trademark of not only knocking people out, but also doing somersaults and double-somersaults in the ring afterwards. That’s an amazing feat for a man who is 235 pounds.”

BOXING COMES TO THE UNIVERSITY OF DELAWARE

Welterweights Ray Robinson (15-2, 6 KOs), of Philadelphia, and Ray Narh (26-2, 21 KOs), of New York via Accra, Ghana, will be matched in the main event of Friday night’s inaugural card at the University of Delaware’s Bob Carpenter Center, to be shown on www.pandafeed.tv, the website’s co-founder, Marc Abrams, announced recently.

“We are ecstatic to be able to launch the new company with two important title fights. We are looking to bring the best boxing, MMA, concerts and entertainment to this venture. We also will be taking the concept of online streaming to the next level as we plan on working with any promoters in not only maximizing the on-line viewership, but we also will help with the live gate as well,” said Abrams.

“We have an extensive media list that reaches all over the world, and plan to use an aggressive multimedia format to help promote these great events. To have our first event to have two titles with the four fighters having a combined record of 103-10 is the type of event we want to bring to fans.”