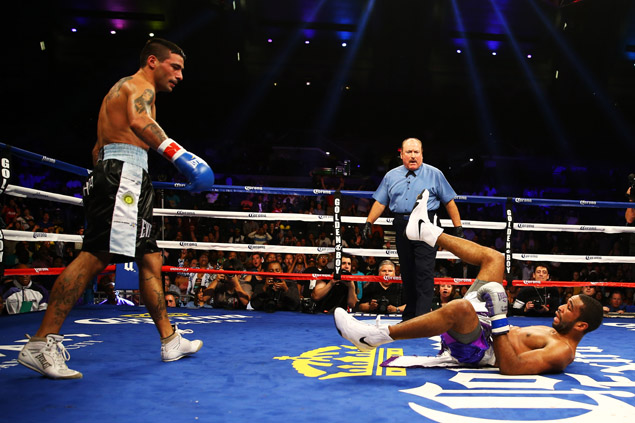 Not only does THE RING’s No. 1-rated junior welterweight, Lucas Matthysse, believe that he can take out RING champion Danny Garcia in their a Sept. 14 Showtime Pay Per View-televised battle on the undercard to the main event featuring Floyd Mayweather Jr. and Canelo Alvarez at the MGM Grand in Las Vegas, but he also believes that his power will carry into the welterweight division should he receive a desired shot at Mayweather.

Matthysse (34-2, 32 knockouts) will attempt to earn the WBA and WBC belts in his clash with Garcia (26-0, 16 KOs), and the winner of their anticipated fight could be a potential opponent for Mayweather.

“I’ve heard that the winner between me and Garcia might be fighting Mayweather,” said Matthysse, who scored three knockdowns during a third-round stoppage of IBF 140-pound beltholder Lamont Peterson in May.

“Now, the winner is going to be me, so I don’t think I’ll have any problems at 147 pounds, because I have to do a special job and a different sort of training to get the power at 147, but I will have the power there as well.”

During his last fight in April, Garcia scored an eighth-round knockdown on the way to a unanimous decision over ex-beltholder Zab Judah, whom Matthysse dropped in the 10th round of a 12-round split-decision loss in November of 2010.

Matthysse has a 4-2 record, with four knockouts against six current or former titleholders, having floored all of them, including DeMarcus Corley, whom he dropped nine times on the way to an eighth-round stoppage in January of 2011.

Matthysse also has knocked out Vivian Harris and Humberto Soto in the fourth and fifth rounds, respectively. Matthysses losses were by split-decision to left-handers Judah, a two-divsion beltholder, and Devon Alexander, who currently holds the IBF’s 147-pound belt.

“You know, what? Danny Garcia is a very strong fighter compared to the rest of the guys that I’ve faced. I can’t compare him to Zab Judah or Devon Alexander or Lamont Peterson, who are boxers, because Garcia’s a real brawler who comes directly to the fighter,” said Matthysse.

“You can see that his feet are planted on the canvas and he’s right there. Alexander and Judah, they are so much different fighters. Danny Garcia is just a brawler. He’s not a boxer. He wants to explode his power, and that’s it. He likes to exchange big punches, so he’s strong, and that’s all that I see about him. I don’t see anything special about him. So I don’t fear him. I can handle his power.” 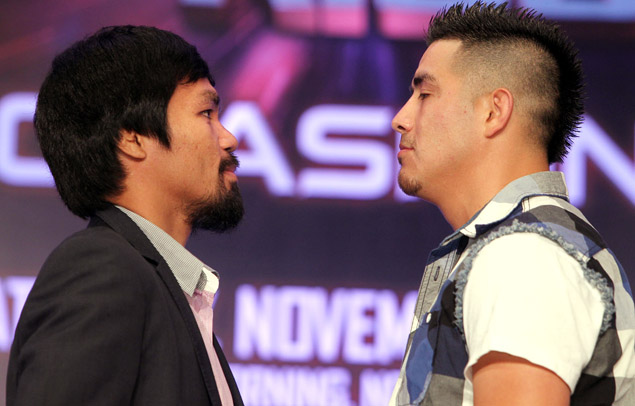 Tickets will go on sale on July 29 in China, and July 28 in the western hemisphere, for the Manny Pacquiao–Brandon Rios welterweight fight, whose first stop of a seven-city press tour was completed on Saturday at the Venetian Ballroom at the Venetian Macao in Macau, China.

The jaunt will have stops in Beijing and Shanghai as well as the Marina Bay Islands of Singapore before going to Bristol, Conn., New York City, and finally Los Angeles on Aug. 8.

Pacquiao, who turns 35 in December, will face Rios in an attempt to rebound from consecutive losses, by disputed split-decision to WBO beltholder Tim Bradley and sixth-round knockout to Juan Manuel Marquez, last year.

Rios, who tuned 27 in April, is coming off a unanimous decision loss to Mike Alvarado in a rematch of Rios’ seventh-round stoppage win last October.