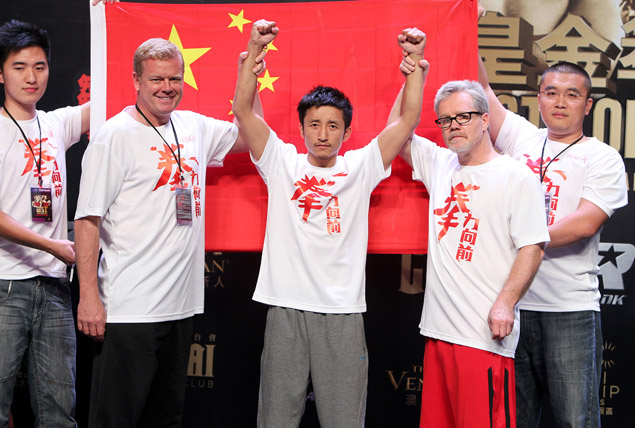 MACAU, CHINA – The question of whether Zou Shiming can become a star in boxing can be answered by defining what a star is. If by “star” you mean having your face adorn a huge banner in front of the world’s largest casino, selling out the venue in your second pro fight and producing a gate of $3 million, as Zou has done for Saturday’s fight at the Venetian Resort’s Cotai Arena in Macau, China, then yes, the word “star” is not a stretch.

But for many, the perception is that you must make it in America to have finally made it. And that will likely take some time.

Zou, the two-time Olympic gold medalist and one-time bronze medalist who made his debut in April with a four-round decision win over Eleazer Valenzuela at the Venetian, will have his second fight televised on a delayed basis by HBO2 in America (5:30 p.m. ET/PT). CCTV5 in China will beam the show live to the country with the world’s largest population.

In his first six-round test, Zou faces Mexican Jesus Ortega, who has a record of 3-1 (2 KOs). Ortega’s best credentials for this fight are that he has a boxing license and isn’t on any “No-Fly” lists.

Bob Arum, whose company Top Rank has promoted the last two events in Macau, is optimistic that Zou’s popularity can eventually extend beyond China and cross over into the States. “Remember, we have more Chinese-Americans in the United States than we have Filipino-Americans,” said Arum at Friday’s weigh-in. “Look how big of a star Manny became in the U.S. We have to give them a good product, and we gave them a good show the last event, so we have satisfied customers. This is the emerging major market for the sport of boxing.” 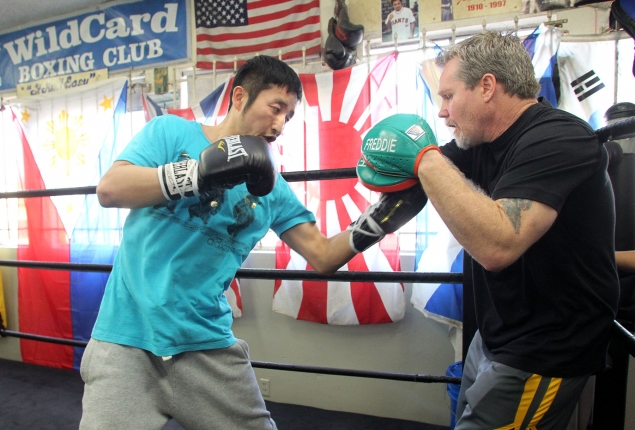 With that in mind, Zou’s work with trainer Freddie Roach has largely centered around altering his amateurish style into one more conducive to professional success.

Wherever there is an ambitious casino looking to make its name on the world stage, professional boxing is sure to follow. Yet up until last decade, professional boxing didn’t exist in Macau or China. Zou’s first gold medal-winning effort, in front of an adoring hometown crowd at the Beijing Games in 2008, was seen as a catalyst for altering local perceptions on the sport.

“You must understand the culture of the Chinese people, and you must give the Chinese people what they want,” said Valcarcel. “They are different. They like the show. We love boxing in America, they love shows. Boxing plus something else. The promoter has had success giving a boxing show to Chinese people.”

Much of the boxing talent on the undercard consists of Filipinos, including unbeaten flyweight contender Milan Melindo (29-0, 12 KOs), who faces WBO/WBA flyweight titleholder Juan Estrada (24-2, 18KOs) in the co-feature, plus Genesis Servania (21-0, 8 KOs) and Dave Penalosa (6-0, 4KOs). IBF featherweight titleholder Evgeny Gradovich (16-0, 8 KOs) of Russia, who makes his first defense against Argentina’s Mauricio Munoz in the third televised bout, is a fight that caters more to the fans in the States than at the Cotai Arena.

At age 32, Zou has a small window remaining to capitalize on his boxing talent, but his impact is already being felt in the sport. He is the spark with which Las Vegas-based promotional outfit Top Rank is creating a boxing culture in the gambling capital of the world, just as they did in Las Vegas alongside Don King in the 70s and 80s. According to the newspaper The Australian, Macau currently generates five times more gambling revenue annually than Las Vegas.

There are many differences between Vegas and Macau. Fight week in Vegas often means throngs of fans coming from around the country to paint the town red, while patrons in Macau are far less likely to indulge in drunken revelry. That said, it isn’t uncommon to see patrons enjoying Cuban cigars in a smoking-friendly restaurant while being served expensive Yunnan red wine, aged ten years, out of a hand-crafted vase at any hour one desires.

A walk around the casino wearing a credential emblazoned with Zou’s face will give any outsider a quick demonstration of the fighter’s popularity. “He is one of my heroes,” said a cashier at FatBurger, whose name tag read “Bill.” “I don’t know how to say it in English – he’s very strong and fast.” The manager had less of a grasp on the English language, but displayed his enthusiasm by miming a flurry of punches on his cashier.

The readiness of Macau to host big events of an international interest will be tested on Nov. 23, when former eight division world champion Manny Pacquiao faces Brandon Rios in his HBO pay-per-view televised comeback fight. Arum is optimistic that the fight will create a “feeding frenzy” among those looking for tickets and closed-circuit seats, and is predicting a gate of $10 million.

The culture of China is changing as the country continues to close the gap between itself and the United States for the top spot among world economies. Whether the growth that is being seen in Chinese boxing can be sustained will depend on how well Top Rank and other promoters nurture the interests of the fans.