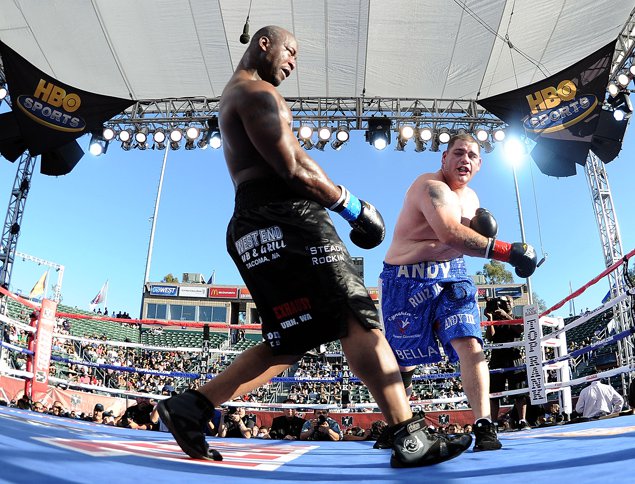 Despite his best efforts to block out the criticism, Andy Ruiz Jr. hears each and every jeer about his physical appearance. Standing at 6-foot-2 and a rotund 250 pounds, he knows he isn’t the statuesque figure that boxing fans are accustomed to seeing in the ring, like a Floyd Mayweather Jr., or the Klitschko brothers. Unless you’ve seen him in the ring or have observed him in the gym, it’d be easy to dismiss him as a fighter who isn’t dedicated to his craft.

But Ruiz also knows that boxing isn’t a bodybuilding contest, and that a six pack won’t enable you to take a left hook to the jaw any better than a man without.

“Yeah, they doubt me because I’m a chubby kid,” the 23-year-old Ruiz said of the reaction he gets from opponents. “They underestimate me and when they get in the ring, they get their asses knocked out.”

His physique notwithstanding, Ruiz is a fast-fisted, aggressive boxer-puncher, capable of throwing powerful combinations, and a promising young prospect worth keeping an eye out for in the quickly approaching post-Klitschko era. 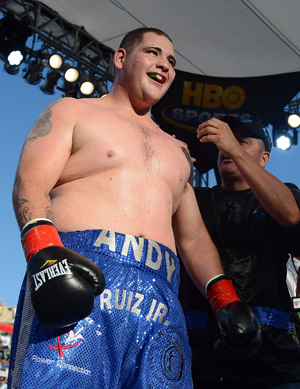 As an amateur, Ruiz (19-0, 13 knockouts) once topped out at 324 pounds. He turned pro in 2009 at 297 pounds (though he probably looked svelte in comparison to his 339-pound opponent). For the past year, Ruiz has camped out at around the 250-pound mark, with aims to drop further. Part of his motivation is the benefit it will bring to his in-ring performances; part of it is rooted in his hopes to quell the stigma.

“I get a little irritated when people say that I’m overweight,” admitted Ruiz, a native of Imperial, Calif. “But little by little, the weight is going to keep coming off, just like how it’s been. I want to be chiseled, I want to be like the other fighters, but I just gotta work harder.”

“It’d bother me if he was 1-19, but he’s 19-0,” said Ruiz’s trainer ‘Big’ Jeff Grmoja of his fighter’s weight. “There’s been a lot of guys climbing in the ring with him that are chiseled that have been knocked out. I don’t think Andy is ever going to be a chiseled guy and we have just have to deal with it. That’s just not his body makeup. Julio Cesar Chavez Sr. wasn’t a chiseled guy, either.”

Ruiz will get his opportunity to show that there is more to him than meets the eye on Saturday, when he faces fellow unbeaten heavyweight Joe Hanks (21-0, 14 KOs) at the Venetian Resort in Macau, China on a card that will feature two-time Olympic gold medalist Zou Shiming’s second pro bout, plus the first title defenses of WBO/WBA flyweight titleholder Juan Estrada’s and IBF featherweight titleholder Evgeny Gradovich, who will face Milan Melindo and Mauricio Munoz, respectively.

The Ruiz-Hanks bout will be shown by UniMas’ Solo Boxeo series on a delayed basis.

The Hanks fight will be Ruiz’s second trip to China, and his first since traveling with the Mexican Olympic team in 2007 for qualifiers. Unlike many heavyweight hopes in recent years, who come from other sports later in life, Ruiz spent his youth paying his dues in the amateurs, amassing about 130 fights, many of which took place south of the border in Mexico, where he trained in Mexicali.

A hyper youngster, Ruiz was first brought to a boxing gym at the age of six as a way of burning off energy.

“My Dad would always hit me, and my Mom was like ‘motherf–ker, you need to calm down, you have so much energy,'” remembers Ruiz. “First they took me to a karate gym and it was kind of boring because it took so long to fight. So we went to boxing and that’s how my Dad got me into boxing.”

Always big for his size, finding bouts against kids his own age at the Junior Olympic level was difficult, which often meant fighting kids 2-3 years older than him at tournaments.

“I’ve never been skinny; the lightest I’d ever been was the day that I was born,” Ruiz said with a chuckle.

For the first 11 fights of his career, Ruiz worked with Freddie Roach out of the Wild Card Gym in Los Angeles, but found one-on-one time hard to come by while sharing a coach with Manny Pacquiao, Amir Khan and Julio Cesar Chavez Jr. Ruiz’s manager Joe Gagliardi then set him up in Las Vegas, where he had trained briefly with Miguel Diaz, before linking up with Grmoja.

In the five fights Ruiz has worked with Grmoja, none of them have gone the distance, with three of his last four ending in the first round. Hanks, 30, stands 6-foot-4 and also weighs around 250 pounds – of solid muscle. Like Ruiz, the Newark, N.J. native will be facing his first step-up in competition as well. The bout will be Ruiz’s first scheduled 10-rounder, while Hanks has fought two fights scheduled for that length, going the full distance with one-time cruiserweight Alfredo Escalera Jr. in 2011.

“I think this could propel Andy if he moves on to victory,” said Grmoja. “The heavyweight division is in a lot of ways in total need for a hero. The title has been gone from America for a number of years; what used to be the glamorous division has now been absentee with the Klitschkos holding the title and moving the fights overseas. Boxing needs the heavyweight division to take off, and it’s always been sparked by the United States.

“You’ve seen some of the last few fights here with [Bermane] Stiverne and [Cris] Arreola, we just recently seen Jonathan Banks and Seth Mitchell, it’s wide open looking for someone to take over and be a hero. That’s our goal.”

If others are doubting whether Ruiz will factor into the future of the division, he isn’t being swayed by their opinions.

“I’m not scared of anything. I have confidence and my skills and my punch that I can hang with those guys.”