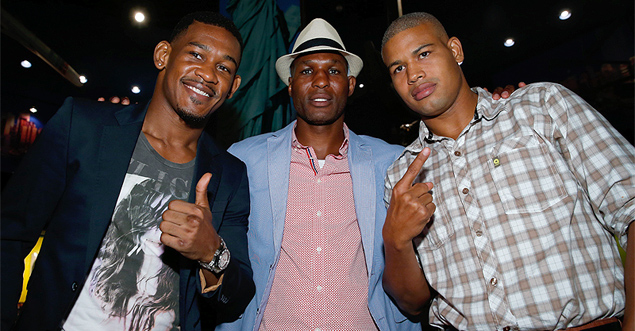 Monday night is all right for fighting. At least that’s what Golden Boy Promotions and Fox Sports 1 – the new all-sports network that will launch on Aug. 17 – are banking on.

Bernard Hopkins, the IBF light heavyweight titleholder, put on his promoter’s hat for a noon-time press conference at Planet Hollywood at Times Square in Manhattan on Tuesday to announced the deal for 24 fights that will be broadcast on Mondays with an inaugural show featuring a 10-round middleweight match between Danny Jacobs and Giovanni Lorenzo at the Best Buy Theater in midtown Manhattan on Aug. 19. The show, which will be called Golden Boy on Fox will air twice a month for the first year.

When Richard Schaefer, the CEO of Golden Boy Promotions, told Hopkins about the deal, the oldest world champion in boxing got nostalgic.

“When Richard did the deal I thought it was great. It’s opening up and giving fighters from New York, D.C., Philadelphia, Jersey, Delaware, the Tri-State area – an opportunity. It gets that moving again,”Hopkins said. “It gets back to the old ’70s and the early ’80s day where we had those big names and shows and fighters got a chance to build their names up.” 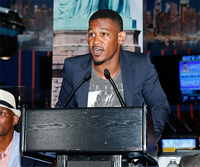 Jacobs, who is from Brooklyn, was joined at the press conference by other New York City boxers on the card – Eddie Gomez of the Bronx, Marcus Browne from Staten Island and Claude Staten, Jr. from Brooklyn.

For Jacobs the card represents more than an opportunity to make history. In May 2011 Jacobs was diagnosed with osteosarcoma, an aggressive form of cancer. A tumor had wrapped around his spine and caused partial paralysis in both his legs. Doctors thought if he survived, he’d never walk again, let alone box.

“For me to be here at Times Square in my own main event, I’m totally blessed,” Jacobs said.

The new Fox Sports 1 deal and the additional 24 television dates give Golden Boy one of the strongest presences in the boxing business right now. Since HBO decided they were no longer going to do business with Golden Boy, the company has taken their inventory of prime time boxers to Showtime. They have a working agreement with Floyd Mayweather, Jr. – the top attraction in the sport and are helping stage his Showtime Pay Per View fight with Saul Alvarez on Sept. 14. They also have a 24-fight deal in place with Fox Deportes, Fox’s Spanish language network in the U.S.

Bill Wanger, Fox Sports executive vice president of programming and research, said their past dealings with Oscar De La Hoya, the President of Golden Boy Promotions, was instrumental in putting together the deal for the new show on Fox Sports 1, which will be in 90 million homes on all cable and satellite systems.

“Oscar and Company and Bernard had a great reputation in the business,” Wanger said. “We felt that of all the people in the boxing business they were the right fit for us. And we love Oscar and we’ve been involved with him in other things and it’s a great fit.”

The early week broadcast harkens back to the old USA Network’s Tuesday Night Fights days. It was a successful early week boxing program, pitting former champions against up and coming contenders in gatekeeper matches. Wanger believes the Monday night fights will be successful.

“We just thought the weekend, with Friday and Saturday, was a cluttered environment for fights, whether it’s boxing or UFC,” Wanger said. “We wanted to establish a destination franchise on a Monday night to help kick off our week on Fox-Sports 1. In talking to everybody at Golden Boy, I thought we could stage good fights on Monday and have the category to ourselves.”

Hopkins, who fondly recalled those old USA Network Tuesday night fights, likes the fact that Golden Boy will have a captive audience on Monday night. Hopkins was asked if he had ever fought on Monday night.

“Yeah, on the streets of Philadelphia,” he said. “I’ve had plenty of fights on a Monday night in Philadelphia and half of them I started.”