Adamek an older but wiser heavyweight 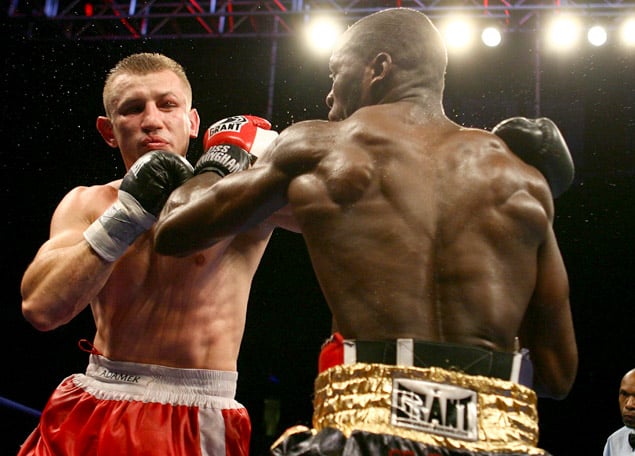 Even at the age of 36, Tomasz Adamek’s trainer, Roger Bloodworth, believes his fighter would be trouble for any heavyweight this side of the Klitschko brothers.

Before falling by 10th-round stoppage to WBC titleholder Vitali Klitschko in September of 2011, Adamek (48-2, 29 knockouts) had won six consecutive heavyweight bouts, two of them by knockout, since rising from the cruiserweight ranks.

As a cruiserweight, Adamek was the first man to defeat Johnathon Banks, who recently split victories with heavyweight contender Seth Mitchell, stopping Mitchell in the second round of their initial bout.

Although he weighed in at a career-high 223 pounds for the rematch with Cunningham, the nearly 6-foot-2 Adamek is nearly always shorter and lighter than his heavyweight rivals. Yet given Adamek’s track record, hustle and resourcefulness, Bloodworth gives him a shot against virtually all of the division’s contenders.

“Every fighter has things that you can exploit, I mean, there are no perfect fighters. The question is whether the fighter that gets into the ring with you can exploit you, and certainly Tomasz has enough to do that,” said Bloodworth.

“I mean, he’s learned enough since he’s been in the heavyweight division to take advantage of a lot of the different mistakes that guys make. So we’ll just have to wait and see what shakes out and see what we’re offered and go from there. But first of all, we have to take care of business with Tony Grano, because I think that he’s going to come into the ring and try to do his best to take Tomasz’s place.”

Adamek will face the hard-hitting Grano (20–3-1, 16 KOs) as part of a triple-header on Aug. 3 at the Mohegan Sun in Uncasville, Conn., a show that will include middleweight Curtis Stevens against Saul Roman, as well as Chambers in a cruiserweight battle with Thabiso Mchunu.

The event, billed “Three To See,” will represent the next edition of NBC’s Fight Night.

By the time he enters the ring against Grano, however, Adamek will have been out of action for eight months. But Bloodworth said the ring absence was good for Adamek.

“We had four rough fights last year, and Tomasz looked a little tired in that [second] fight [with Cunninigham.] I think that it was good for him to take a little break,” said Bloodworth. “Sometimes, it’s just good for a guy to get out of the gym and to get away from it for a while. But we haven’t been idle. We’ve worked on distance, defense and combinations and some other skills.”

There are those who felt Cunningham deserved the win over Adamek, who admits to having turned in a sub-par performance.

“I’m still learning. I’m 36, but I’m still learning. My talent is not yet at 100 percent,” said Adamek. “But after that last fight, I have rested a few months and I’ve worked on my technique. I’m in better shape. I’m ready for this comeback.”

As much as he would like to see an improvement in Adamek over his last performance against Cunningham, Bloodworth just wants to see him get another “W.”

“The name of this game is winning, and that’s the bottom line. People forget, Tomasz has only lost two fights, and those were both to top fighters [the other was the loss of his WBC 175-pound title by UD to Chad Dawson in February 2007]. He’s got a very good chin and he’s a very good athlete, and, he’s learning more every day,” said Bloodworth.

“The first thing that he has to do is to win, by any means necessary. Now if he can look spectacular doing that, then that’s fine. But I always go by the sayings of George Benton: Just win this fight and come back and look great in the next one.”