Ten years ago Denis Grachev had yet to enter a boxing ring and was solely focused on his kickboxing career. He’d been successful at kickboxing, winning a cache of titles along the way. However, when he was approached in 2005 by Mark Dion to come to America and represent his gym in San Diego, Calif., it was an easy choice. 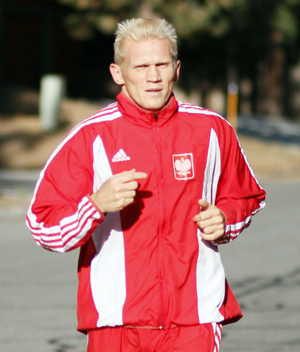 Upon arriving he realized that there was nobody to fight in the kickboxing world and so made switch to boxing following his boyhood hero Mike Tyson. The transition has so far gone pretty well for the 30-year-old Russian who had a breakthrough year of sorts in 2012 when he rallied to stop and hand highly touted Ismayl Sillakh his first pro loss, gave Lucian Bute all the former IBF super middleweight titleholder could handle in a competitive decision loss, and then upset unbeaten two-division champ Zsolt Erdei in the semi final of the “Monte Carlo Million Dollar Super Four,” winning a split decision.

Grachev, who spoke to RingTV.com from his training base in Big Bear, Calif., last week, has a simple message for Rodriguez: “I must break you.” Time will tell if he can back up the Ivan Drago quotes, but so far he’s been able to live up to his nickname.

Anson Wainwright: What are your thoughts that fight and also Rodriguez as a fighter?

Denis Grachev: When I met him he was very friendly. He is a tough guy and he is ready to fight anyone, but he’s never faced someone tougher than him. This time he will, and I wish him luck.

AW: It takes place in Monte Carlo. You’ve already fought there. What are your thoughts on returning for the final?

DG: I really like Monaco and I’m looking forward to be there in the main event in summer time.

AW: Last time out you upset previously unbeaten two-weight world champion Zsolt Erdei, winning a split decision. Can you tell us about that fight?

DG: I’m sorry, Zsolt, that wasn’t my best performance. But Erdei is a very good boxer as everybody knows, I’m very proud to have been able to beat him and prove that I’m a world-class fighter.

That fight was a mess. First they told us that the fight wasn’t going start earlier than 10:00 p.m., and then they called us around 9:30 saying that we had to go to the fight so I had to hurry up and I didn’t even warm up. If you notice, I even put my trunks backwards, so it took me three rounds just to warm up in that fight and also I had a bruised rib one week before the fight and I was only able to run light to keep my conditioning but in the end everything went well.

AW: Prior to facing Erdei you upset streaking Ismayl Sillakh with a come from behind KO and also gave Lucian Bute plenty of trouble. What would you say about those fights?

DG: That just proved what I said before… that I’m a world-class fighter. With the Sillakh fight, I followed my game plan, which was to put a lot of pressure and eventually knock him out, and we did it.

With Bute, I did the same thing, hurting him a couple times, but he was good enough to survive. I won that fight in everybody’s eyes but the judges.

AW: You’re originally from Chaykovsky, Russia. Can you tell us about your early years growing up?

I’m from a small town with a lot of countryside and rivers with only 100 thousand people. My neighbourhood was the poor part of the town but I couldn’t ask for a better family than mine. I was very happy growing up with my year-older brother, Artem. I had also a very good kickboxing team. They helped me a lot and they were like my second family. I invited my old coach to my fight in Monaco.

AW: You had extensive career in kickboxing before turning to boxing, could you tell us a little about that?

DG: I started at 14 years old and I won my first junior world championship at (the) age of 15. After that my life plan changed and the kickboxing become the priority – kickboxing and school, kickboxing and home and kickboxing again, then eat and sleep.

I won many national and international medals at full-contact, light-contact, and low-kick competitions.


AW: Though you are Russian you live in San Diego, Calif., now. How did this come about?

DG: Back in 2005, I won the world championship in kickboxing and after that I had an offer to come to USA to fight for City Boxing Gym in San Diego, which is owned by Mark Dion, who became my manager and brought me to where I’m right now.

AW: How did you come to leave kickboxing and take up boxing?

DG: After I came to USA I realized that there was nobody to fight kickboxing and I always loved boxing and Mike Tyson, so it was an easy transition.

AW: What are your thoughts on the light heavyweight division and the current champions (THE RING/WBC) Adonis Stevenson, (WBA) Beibut Shumenov, (IBF) Bernard Hopkins and (WBO) Nathan Cleverly?

DG: I must break them all!

Adonis Stevenson, I just watched his last fight and he was looking so happy and that shows me that he got lucky. Bernard Hopkins, he is a legend, he has nothing to prove but he better retire before I put my hands on him. Cleverly and Shumenov, I can beat both at the same time.

DG: My hobby now is my 2-year-old daughter Matilda. She takes all my time off. I like camping and playing my guitar. I can’t play yet but my coach Baruch is teaching me.

AW: In closing do you have a message for Edwin Rodriguez?