Lem’s latest: Rios says ‘its my time’ to beat Pacquiao 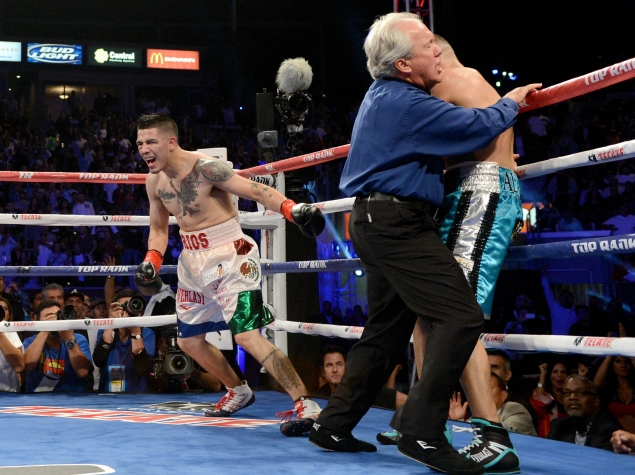 Brandon Rios‘ wife, Vicky, is just over six months pregnant. The couple is expecting the birth of their third child in September, with the newborn to be named Ava, after flyweight boxer Ava Knight.

A former lightweight beltholder, Rios (31-1-1, 23 KOs) will face eight-division titlewinner Manny Pacquiao in a welterweight fight in Macau on Nov. 23 (Nov. 24 in China).

“They’re giving us until the end of September,” said Rios. “So before I leave for China, I’ll see my baby girl being born.”

Rios is coming off a close unanimous decision loss to Mike Alvarado in March that was a rematch of Rios’ seventh-round stoppage win over Alvarado last October.

RIOS: IT’S MY TIME TO DOMINATE

“I’ve been in the gym, just not going too crazy, but just keeping up with the momentum and keeping myself loose so that it won’t be too difficult when I start the really hard training camp,” said Rios, who is handled by reigning Trainer of The Year Robert Garcia.

“We like to start the camp three months out to get ready, so I think that after we come back from China for the press tour in July, we’ll start the serious training. We’ll be in Oxnard,” Calif., at Garcia’s gym.

Rios said he expects to arrive in China “at least 10 days out” before the fight to acclimate himself to the change in time zones.
“I’ll be ready,” said Rios. “Like I’ve told everybody before. It could be a fight in his back yard, I don’t give a s–t. As long as I have an opponent in front of me, I’ll be ready.”

Rios said he is “eating pretty good” and walking around “at 155 pounds.”

“Getting down to 147 will not be that hard for me this time. I’m going to make weight comfortably,” said Rios. “Once I start training really, really hard, and start eating right, the weight will come right off.”

Rios believes that he will have equal, if not more power for his debut at 147.

“I’m moving up in weight, so I don’t have to kill myself. I’ll have better muscle tone and better everything. But you know what? I’m going to be ready. Pacquiao is no joke. I’m getting ready for the the best Pacuqiao ever,” said Rios. 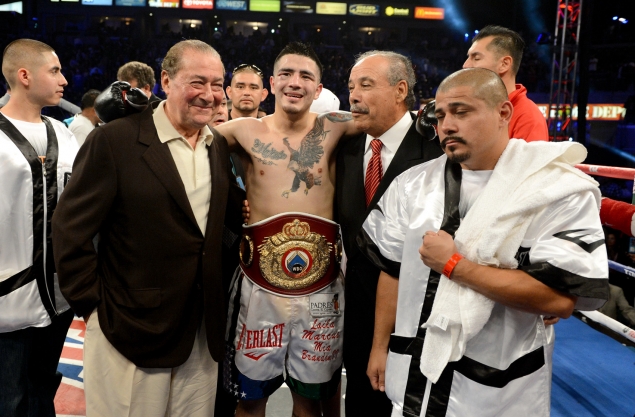 For his rematch with Alvarado, Rios hired controversial strength and conditioning guru Angel Guillermo Heredia Hernandez, whose history includes being involved in performance-enhancing activities. Prior to his work with Rios, Heredia Hernandez worked with Marquez for his fourth and fifth bouts with Pacquiao.

“There’s a big issue right now with this. Don’t get me wrong, Angel does a great job at what he does, and I tested after the last fight and I was clean. I’m not worried about him giving me dirty stuff, because he’s great at what he does, and he got me in great shape. I felt very strong. It’s just money-wise. He wanted too much, and there were other little issues that we couldn’t come to terms on,” said Rios, who integrated a weight-lifting regimen into his workouts for the first time under Heredia Hernandez.

“But, if he wants to, I told him I love the way that he works. It’s just that our terms just haven’t matched up. No disrespect to Angel. He’s great and one of the best out there, and he’s done a helluva job with me with Alvarado. We just haven’t met on terms right now. If he give me the terms that I want, and what my team wants, and if me, Robert and him don’t match, then, no, he will not work with us. But if he does, then I will be more than happy and very pleased for him to work with us.”

As part of a four-man tournament in March, Rodriguez, 28, scored a unanimous decision over previously unbeaten Ezequiel Osvaldo Maderna. On the same card and on his side of the bracket, Grachev defeated Zsolt Erdei by a split decision.

In an event being promoted by Rodney Berman’s Golden Gloves of South Africa, Rodriguez and Grachev have agreed to a catchweight of 171.5 pounds, with a 60/40 split of $1 million as the purse.

Rodriguez trained with Ronnie Shields at Plex in Houston.

“My fight with Maderna was after his win over Erdei, so I didn’t get to watch it that night, but I’ve seen his win a few times. He’s been on my radar a bit as he fought Lucian Bute at 168. Additionally, I saw his win over Ismayl Siliakh. He also beat my pal Vladine Biosse a couple years ago, so I’m very familiar with him,” said Rodriguez.

“I’m fine with the catchweight of 171.5. As I’m really a super middleweight, I’ll be on weight, and I’m sure he will be as well. We both agreed to it, and I don’t anticipate it being an issue. After this fight, I’d like a world title shot. Sakio Bika would be a great opportunity.”

“After my fight with Erdei on March 30, I was able to take in quite a bit of the Rodriguez-Maderna fight, which was very close. It was not Edwin’s best performance, although he won, but I’m confident he can fight much better. I’ve fought at 168 against Bute, so making 171.5 for this fight is no problem,” said Grachev, who lost a unanimous decision to Bute in November of last year.

“Super middleweight might be best for me going forward. Not looking past Rodriguez, but I’d love to fight Carl Froch or Mikkel Kessler as well as Tommy Oosthuizen. I was very comfortable at 168 when I fought Lucian Bute last November and I thought I beat him clearly eight rounds to four. The training here at The Summit has been outstanding, sparring has been terrific. I even went some rounds with Gennady Golovkin. Always good to train alongside a world champion.”

In other bouts on the card, Khabib Allakhverdiev will face Soulemayne M’baye, and middleweights Max Bursak and Prince Arron will meet, as will cruiserweights Dmytro Kucher and Ilunga Makabu.

The event will be broadcast by BeInsport live at 3 p.m. ET/12 p.m. PT in the United States, it was announced by Berman on Tuesday. BeInsport, “The International Sports Channel,” can be viewed through numerous American providers, including Direct TV (Channel 620), Dish Network, Comcast and AT & T U-Verse TV. For further details please visit their website at http://www.beinsport.tv/

The tournament is being distributed worldwide by Octapixx Live, and will also be transmitted live on channels over many international territories, including SuperSport in Africa, Space in Latin America, Al Jazeera Sport in the Middle East, beIN Sport France, Russia 2 and BoxNation in the United Kingdom.

On an Aug. 3 triple-header at the Mohegan Sun in Uncasville, Conn., middleweight Curtis Stevens will face Saul Roman, heavyweight contender Tomasz Adamek will face Tony Grano, and cruiserweight Eddie Chambers will take on Thabiso Mchunu on the next edition of NBC’s Fight Night. Promoted by Main Events, the card is being billed as “Three To See.”