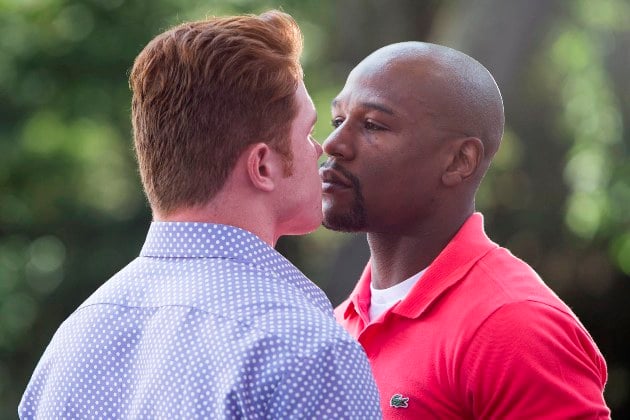 But Mayweather also vowed that the country’s young champion would be the 45th man to suffer defeat at his hands.

“It’s great to be in Mexico. The turnout here and all throughout this tour has been amazing,” said Mayweather, who will try to dethrone Alvarez as THE RING and WBC junior middleweight champion. “Canelo has a lot of fans here in Mexico. We expected that, but I don’t fight for one country. I fight for the whole world.”

Coming off last month’s unanimous decision over Robert Guerrero in defense of his WBC welterweight belt, Mayweather (44-0, 26 knockouts), also THE RING’s No. 1 fighter pound-for-pound, as well as its 147-pound champion, will put the WBA 154-pound belt he won by unanimous decision over Miguel Cotto last May on the line against the determined Alvarez.

“There are a lot of people who don’t think I’m going to win, but on Sept. 14, you’ll see that I will win,” said
Alvarez, who is 22. “I’ve always wanted to be the best in the sport and I’m on my way. I couldn’t let this opportunity go by and I will take advantage of it on Sept. 14.” 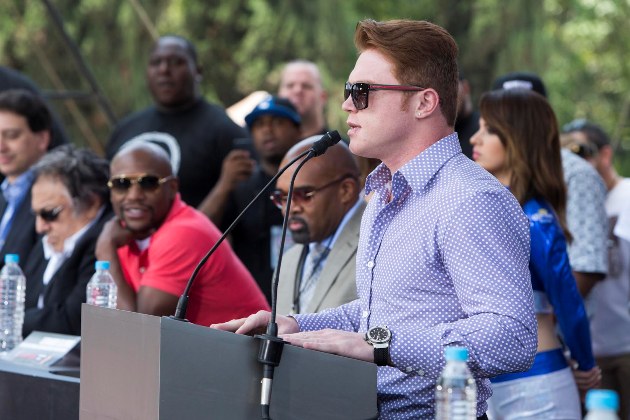 Sunday’s festivities took place at a monument which honors the Ni├▒os Heroes – young cadets who died defending Mexico City’s Chapultepec Castle on Sept. 13, 1847 during the Mexican-American War. The Ni├▒os H├®roes are commemorated by a national holiday on Sept. 13, just one day before the Mayweather-Alvarez fight.

“I want to thank everyone for coming out hereÔÇªall of you. I’ve always said that we had to come to Mexico [on this tour.] There’s no other place like Mexico. I’m so happy,” said Alvarez.

Mayweather won his first world title at the age of 21, lifting the WBC’s junior lightweight belt from Mexican-American Genaro Hernandez with an eighth-round knockout in October of 1998. Since then, Mayweather has also beaten Golden Boy President Oscar De La Hoya, four-division titlewinner Juan Manuel Marquez, and twice defeated Jose Luis Castillo, among others of Mexican descent.

“I have faced a lot of great champions in my career and I can honestly say that my toughest opponents have been Mexican,” said Mayweather, whose split-decision victory dethroned De La Hoya for the WBC’s junior middleweight belt in May of 2007 in a bout which holds the all-time pay-per-view record with more than 2.5 million buys. 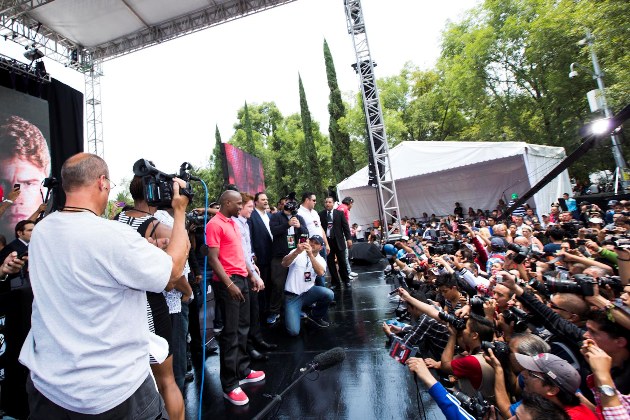 Alvarez (42-0-1, 31 KOs), who turns 23 next month, is coming off the biggest win of his career, a unanimous decision victory over previously unbeaten Austin Trout on April 20. Mayweather, however, does not see enough of himself in the younger man to believe Alvarez’s assertion that he can outbox the elder fighter.

“I commend Canelo. He’s a young, strong champion. I congratulate his team. But when you face Floyd Mayweather you face the best,” said Mayweather, 36, an eight-belt titlewinner. “Right now I just can’t be beat. Maybe in 20 years he’ll be the king, but not right now. Sept. 14 is just another day for me.”

Remaining stops on the press tour: