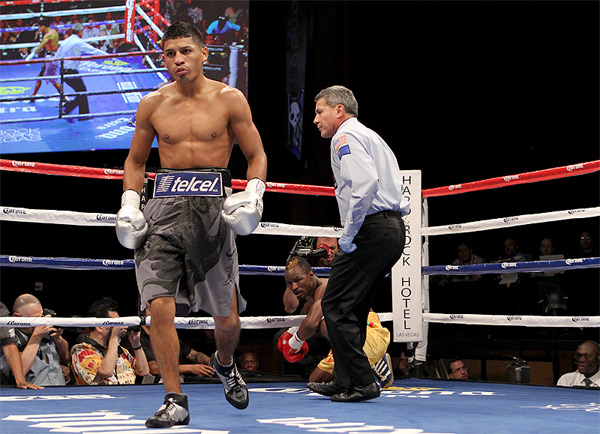 Nearly two years later, referee Russell Mora still is bothered by the memory of the headlines from Abner Mares’ controversial unanimous decision over Joseph Agbeko in Las Vegas in August of 2011.

Mora had failed to penalize Mares for repeated low blows — including for a ruled 11th-round knockdown which replays clearly showed was landed on the cup — in the first of Mares’ two victories over Agbeko in IBF bantamweight bouts.

“I really felt like there was a death. I was very conflicted with what had died, but I knew that I had made a horrible call in the 11th round,” said Mora, 51. “When I read the headlines on Mares-Agbeko, I felt bad for them (the fighters) because I screwed up their fight. They were both marred after the fight for my mistake. I still don’t think that I’m completely over it yet.”

Mora will, nevertheless, work one of his biggest fight since on Saturday at Emirates Arena in Glasgow, Scotland, when he officiates WBO lightweight beltholder Ricky Burns (35-2, 10 knockouts), who is in pursuit of his 21st consecutive win against Puerto Rico’s Jose Gonzalez (22-0, 17 KOs).

Although Mora says he is “better” for the experience of Mares-Agbeko I, he will “not forget what that feeling was like — I felt like I was in mourning.”

“That was the worst thing that I have ever done. There’s no reverse, and there’s no instant replay, there’s no taking it back,” said Mora, a Las Vegas-based electrical inspector for Clark County. “But I did learn a lot, so what I thought was a complete curse actually turned into a blessing.”

For the next three days following that disastrous evening, Mora said his telephone “never stopped ringing,” the result of support from his officiating bretheran.

“I have to tell you that I heard from every single official from Las Vegas and Reno that called — Joe Cortez, Jay Nady, Robert Byrd, Kenny Bayless, Tony Weeks and Vic Drakulich — and nobody sugar-coated his message,” said Mora, who benefited from a personal tutorial by Cortez.

“I went to Keith Kizer’s office the very next day,” said Mora, referring to the NSAC’s current executive director. “He said, ‘Look, you had a bad night. You missed the call, but you’ve got to move on.'”

Mora was reminded of that fateful night last weekend at the MGM Grand in Las Vegas, when he worked a third-round stoppage win by light heavyweight Badou Jack over Michael Gbenga on the Floyd Mayweather-Robert Guerrero undercard.

“I did not have the chance to see Abner or talk to him, before or after the fight, and that’s okay, because I did not want to put myself in his head before the fight,” said Mora. “But I do, someday, want to see Joseph Agbeko, because I would like to give him an embrace and let him know that it could have been different. I’d like the opportunity to apologize — to both of them — for the fact that any of that happened, because they were both scarred by that.”

As if being in the same venue as Mares was not enough, Mora received a scare when Jack dropped Gbenga with the bout-ending body shot.

As he rose to his feet in an attempt to beat Mora’s 10-count, Gbenga complained of — what else — a shot below the belt.

“But this time, I was quite confident that I saw the punch. So I said, ‘No, the punch was right here,’ and I pointed to my stomach. But I have to tell you, I would not have done that prior to that night with Mares and Agbeko. Like I said, I’ve closed the door on it, but I don’t ever want to repeat something like that.”