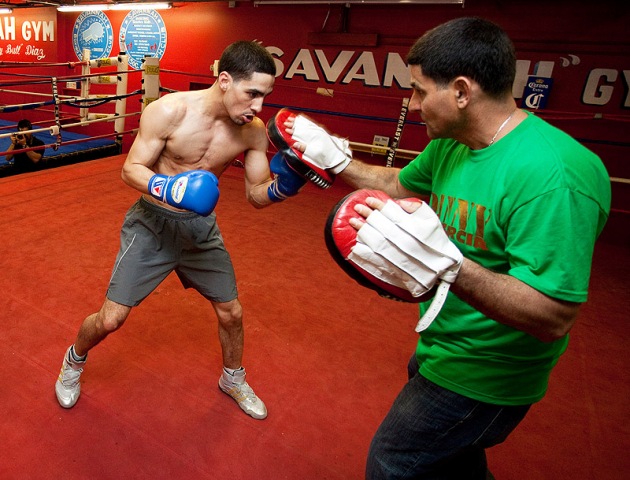 BROOKLYN — The father and trainer of RING, WBA and WBC junior welterweight champion Danny “Swift” Garcia says that his son will score his third straight knockout against Zab “Super” Judah on Saturday night at Barclays Center, and that he will do so in five rounds or less.

Reached on Wednesday at the hotel where he and his son are staying, Angel Garcia expressed outrage that Judah interrupted a Tuesday promotional event involving Danny Garcia and a couple other fighters on the Garcia-Judah card at a nearby Modell’s sports outlet.

“Danny’s a quiet guy. But it’s gotten personal now, with Danny. Zab offended us by showing up when he wasn’t even supposed to be there. They were considering it crashing the party and all of that, but that was Modell’s, and there were little kids there and all of that and ruin an appearance. So basically, that’s why I know that he’s a sissy. He ain’t no real man,” said Angel Garcia.

“So he’s going to show up where there are children around, and mothers, families, and try to be a tough guy. Come on. What kind of tough guy is that? That’s why he’s going to get his ass whupped. Anyway, I’m giving Zab Judah five rounds. Courtesy. Zab’s going to try to come fast, straight left and and all of that crazy stuff that we already know that he’s going to do. It’s nothing. But when Danny starts landing, he ain’t going to be able to run nowhere. “

Bute (31-1, 24 KOs) is coming off a unanimous-decision victory over previously unbeaten Denis Grachev last November, which helped him to rebound from last May’s fifth-round knockout loss to Carl Froch.

“It’s been almost six years that he’s been talking negatively about me,” said Bute during a Monday workout at the Palm Beach Gym in West Palm Beach, Fla. “He repeatedly said that I was afraid to face him and that by avoiding him I do not respect the fans. I always knew this fight would happen. It was just a question of choosing the right time. And here we are. I accepted to move up to 175 pounds to make sure the fight happens. The time has come to shut him up.”

“I was an undefeated boxer during my preparation leading up to the fight with Carl Froch. I knew nothing of the impact and consequences of defeat. I discovered the hardships of losing. It was very hard to live with what happened. The defeat made me lose some confidence in my abilities and it showed in my fight against Denis Grachev.

“I was hesitant in my performance. It took some time, but I am back and hungry for victory. I will not repeat any of my errors against Pascal. It’s been a while since I’ve been at such peak physical condition. I miss this feeling. Pascal is very present in my head. When I walk into the gym, I think of Pascal. I visualize the fight all the time, sometimes even while having dinner with my team.”