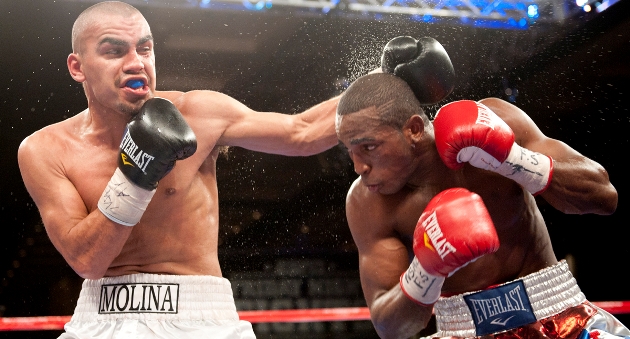 An agreement is in place for junior middleweight contender Carlos Molina to challenge IBF beltholder Ishe Smith at a site to be determined prior to July 27, according to Molina’s promoter, Leon Margules, of Warriors Boxing.

A 34-year-old Las Vegas resident, Smith (25-5, 11 knockouts) is coming off his title-winning majority decision over Cornelius Bundrage in February.

Smith is promoted by Floyd Mayweather’s Mayweather Promotions, whose CEO is Leonard Ellerbe. Ellerbe could not be reached for an immediate comment.

“It’s agreed to, and Leonard will confirm,” said Margules. “We have e-mailed confirmation of the deal, and I’m actually working on the contracts as we speak. We don’t have an exact date but we’re looking at a date before July 27.”

A 29-year-old Mexico-born Chicago resident, Molina (21-6-5-2, 6 KOs) has won two straight since falling by controversial 10th-round disqualification loss to James Kirkland in March of last year, having rebounded with decisions over Damian Frias and Cory Spinks in August and February, respectively.

Molina has endured a draw as well as a six-round majority decision loss against current WBC middleweight beltholder Julio Cesar Chavez Jr. in December of 2005 and 2006, respectively, and took an unbeaten streak of 11-0-1 with just two stoppages into the fight with Kirkland.

Molina’s run includes a victory over former welterweight beltholder Kermit Cintron in July of last year and a draw with then-unbeaten Erislandy Lara in March of last year.

During his streak, Molina has also beat welterweight fringe contender Ed Paredes by unanimous decision in April of 2009. Paredes has gone 11-0-1 with seven knockouts since falling to Molina. 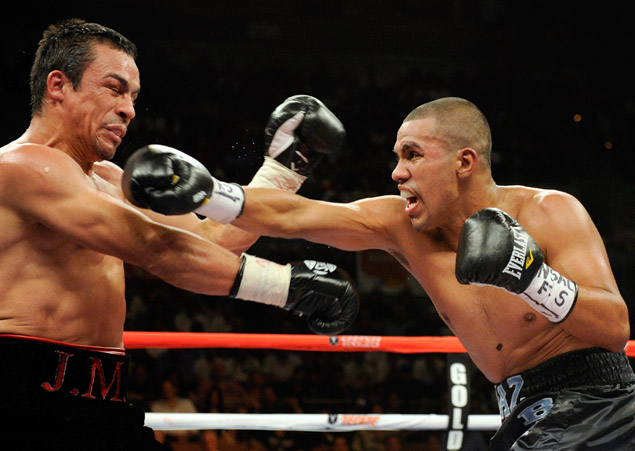 On the Diaz-Cuevas undercard, “The Corpus Christi Kid” Jerry Belmontes (17-1, 5 KO’s) will try to rebound from his first loss against former titleholder Daniel Diaz (19-4-1, 14 KO’s) in a junior lightweight bout.

Promoted by Golden Boy Promotions in association with Leija and Battah Promotions, Diaz, of Houston, will meet the son of a former titleholder in Cuevas.

Diaz is 2-4 over his past six fights, during which he defeated contender Michael Katsidis by split-decision, split bouts with current WBA welterweight titleholder Paulie Malignaggi, and lost twice to four-division titlewiner Juan Juan Manuel Marquez, being stopped in the ninth round of their first matchup in the Fight of The Year in February of 2009.

Prior to that, Diaz had made seven successful defenses, four of them by stoppage, of the WBA title he won by unanimous decision over Lakva Sim in July of 2004.

That run included knockouts of former titleholders Acelino Freitas and Julio Diaz in the eighth and ninth round in April and October of 2007, respectively. Juan Diaz added Freitas’ WBO belt, and Julio Diaz’s IBF title.

CLEOTIS PENDARVIS-DIERRY JEAN SLATED FOR MAY 10

Junior welterweight Cleotis “Mookie” Pendarvis (17-3-1, 5 KOs), of Los Angeles, will pursue his seventh straight win against Dierry “Dougy Style” Jean (24-0, 16 KOs) in an IBF eliminator bout on May 10 in a Friday night edition of ShoBox: The Next Generation from the Buffalo Run Casino in Miami, Ok.

In the televised co-feature, middleweight John “Apollo Kidd” Thompson (11-0, 4 KOs), of Newark, N.J., will face Taureano Johnson (14-0, 10 KOs), a resident of Georgia who is originally from Nassau, Bahamas.

The event is being promoted by Camille Estephan, of Eye of the Tiger, and Greg Cohen, of Greg Cohen Promotions.