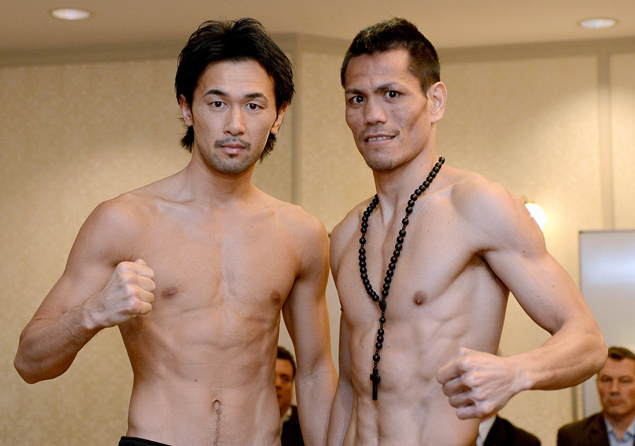 At 35, Filipino veteran Malcolm Tunacao (right) is probably headed into his last shot at a major title when he challenges WBC bantamweight beltholder Shinsuke Yamanaka (left) on Monday in Tokyo.

It has been 12 years and one month since Malcolm Tunacao lost the WBC flyweight belt via first-round knockout to Pongsaklek Wonjongkam in his second title defense.

Tunacao, of Mandaue City, Philippines, was 23 at the time. He had held the title for a little under a year after scoring a technical knockout of Thai Medgoen Singsurat, who had knocked out another Filipino upstart named Manny Pacquiao to win the title.

The loss was crushing for Tunacao, who had turned pro just three years prior to the Wonjongkam loss and had just 12 fights to his credit at the time. He knew his time would come again; he just didn’t think it would take more than a decade.

“For me there was no frustration because I (knew) this time will come,” said Tunacao.

Now 35, Tunacao (32-2-3, 20 knockouts) finally gets his shot at a second world title on Monday, when he faces fellow southpaw and undefeated WBC bantamweight champion Shinsuke Yamanaka (17-0-2, 12 KOs) at Ryoguko Kokugikan in Tokyo, Japan.

Tunacao, who relocated to Japan in 2009 after signing with influential Japanese manager Masato Yamashita, has lost just once since the Wonjongkam fight, a technical decision to another Filipino living in Japan named Rolly Matsushita. He earned his shot by knocking out Christian Esquivel in seven rounds days before last Christmas in a title eliminator.

Esquivel was the man Yamanaka stopped in 11 rounds in 2011 to win the vacant title, which led to successful defenses over former titleholders Vic Darchinyan and Tomas Rojas.

Tunacao and Yamanaka sparred briefly before the Darchinyan fight, and although Tunacao admits that the two sessions were brief, he emerged with an unshakable belief that he could hand Yamanaka his first defeat.

“Because I know I am much more powerful than him,” explained Tunacao. “My belief is that I will win this fight.”

Living in Japan means training in good company, alongside fellow former titleholders Hozumi Hasegawa and Nobuo Nashiro. But it also means extended periods of time away from his two sons – Dave, 13, and Malcolm Jr., 11 – and 16-year-old daughter Sharalyn, all of whom still live in his home province of Cebu in the Philippines.

Of his children, only his daughter was old enough to vaguely remember when their father was the toast of the nation as a world champion. Tunacao says that what kept him inspired all of these years while fighting a never-ending cycle of tuneup bouts was his hope to bring a world title back to them.

This Monday, Tunacao gets his second – and likely final – shot at glory.