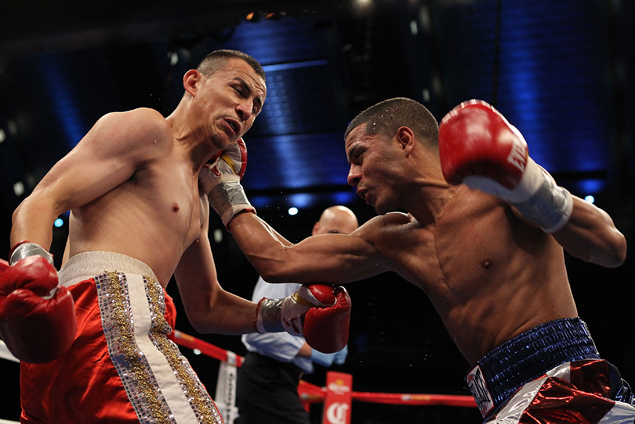 NEW YORK – In Luis Orlando Del Valle’s first “make-or-break” fight, he was simply broken. Facing the vastly more experienced former world champion Vic Darchinyan last September in his HBO Boxing After Dark debut, Del Valle had few answers for the deceivingly crafty puzzle presented to him. Ceding both his unbeaten record and the momentum which came with that in the unanimous decision loss, the native of Bayamon, Puerto Rico found himself back at square one.

It’s a place where Del Valle isn’t particularly uncomfortable to be at.

“You’re never happy for a loss, but I’m glad that my ‘0’ is gone,” said Del Valle (16-1, 11 knockouts), who offers no excuses, save for a lack of experience, for the loss. “Right now, I have nothing to lose. That loss set me back to really look at what I needed to improve. I feel like I’m starting again.”

The 26-year-old prospect will return to the ring for the first time since the loss this Thursday against Andre Wilson (13-5-1, 11 KOs) in an eight-round bout at the Roseland Ballroom in New York City on a DiBella Entertainment “Broadway Boxing” card which will also feature the next installment former junior middleweight titleholder Yuri Foreman’s attempt at a career reincarnation. Del Valle is hoping to show off a newly revamped skill set.

Following the loss, Del Valle decided that drastic changes were in order. He started by moving his training camp from the Newburgh Boxing Club in Upstate New York to south of the border, at the Romanza Gym in Mexico City, where he now trains with legendary trainer and recent International Boxing Hall of Fame inductee Nacho Beristain. Since January, Del Valle has worked with Beristain, absorbing as much of the information as he could from the man who constructed the careers of technical geniuses Ricardo “Finito” Lopez and Juan Manuel Marquez.

“When Nacho puts you to work, he’s just a very strict guy,” said Del Valle. “He tells you what you have to do. And he’s a technician, he explains to you, he doesn’t just tell you (that) you have to do it like this, he tells you ‘this is the way, and this is what could happen, and that’s how you have to do it.’

“I thought I was going to an army type of place. But when I got there, I found a very strict guy when it comes down to training but a very nice guy with a very good sense of humor that makes you feel right at home.”

Del Valle also appreciates the gym’s environment, where, unlike at his former training center, he isn’t the number one fighter in the gym. His gym mates and sparring partners include former two-division world titleholder Jhonny Gonzalez, as well as Julio “Pollito” Ceja, who will be challenging Jamie McDonnell for the vacant IBF bantamweight title next month in the United Kingdom.

“I was used to being in a place where I was the role model, I was the person that everybody used to look up to,” said Del Valle. “So my motivation, it was just to keep working hard so the people would work harder than I was. Basically I was the man.

“But in this gym, this is a whole different atmosphere where you’re not the number one guy, you know you’ve got skills but there are people with the same skills or better. And if you slack, they’re gonna keep stepping up. It’s a great atmosphere where it helps you get to the next level.

Assuming all goes according to plan, Del Valle is hoping to fight again in June and once more before the year is up. Either way, Del Valle is happy to be starting from scratch with his new trainer.

“I just can’t wait for us to start this new journey together (with Beristain) and hopefully we can get a title soon. I’m the first Puerto Rican boxer that he has ever had in his 54 years, so I’m excited to make history together.”