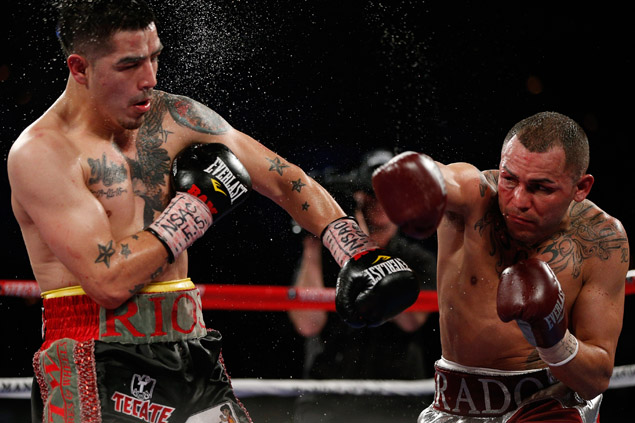 Mike Alvarado’s unanimous-decision win over Brandon Rios in their HBO-televised rematch delivered 1.2 million viewers, according to a press release from the network. This represents a 45 percent increase in viewership from last October when then-unbeaten Alvarado was stopped in the seventh round by Rios in a bloody, Fight-of-the-Year-caliber clash.

The broadcast was another success in what has so far been a strong year of boxing programming on HBO.

On March 16, for example, Tim Bradley rose from a 12th-round knockdown to secure a unanimous decision over Ruslan Provodnikov in defense of the WBO welterweight title he won by disputed split-decision in June over Manny Pacquiao.

On the heels of this past Saturday’s first-round knockout of countryman Francisco Sahuari, Mexican Olympian Oscar Molina will pursue his fourth straight win in as many pro fights on the April 12 against Daryl Gardner.

“With the quick knockout result on Saturday,” said Molina’s promoter, Dan Goossen, “it allowed us to add Oscar to our ESPN event, which gives him great exposure to fans who’ll get a first hand look at Mexico’s Olympic representative.”

Molina’s twin brother, Javier (13-1, 5 KOs), is also a welterweight, and is also scheduled to return to the ring on April 27. The sons of a former amateur boxer, the twins are also the siblings of Carlos Molina (17-1-1, 7 KOs), a 27-year-old junior welterweight.

The winner of Arreola-Stiverne would be in line to challenge 41-year-old WBC titleholder Vitali Klitschko, who scored his 13th straight win and his 10th stoppage victory during that run against Manuel Charr in September.