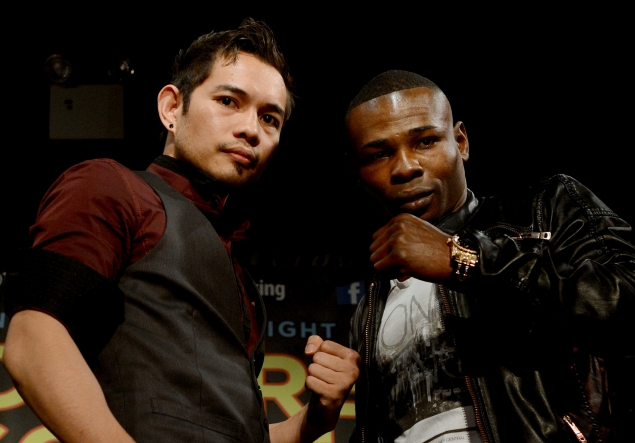 The 15-minute special will be broadcast following the network’s televising of the rematch of October’s bloody Fight-of-The-Year-caliber clash between junior welterweights Brandon Rios and Mike Alvarado. Rios (31-0-1, 23 knockouts) became the first man to stop Alvarado (33-1, 23 KOs), doing so by seventh-round knockout.

“Rigondeaux believes that he’s the best junior featherweight around, and a lot of people have given that accolade to Nonito. But Rigondeaux is very skilled fighter,” said Top Rank CEO Bob Arum.

“You don’t win two Olympic gold medals without being very, very skilled, and he’s always in remarkable shape. He can box, he can punch, and he’s just one of the best fighters around. Therefore, he represents a real threat to Nonito.”

Donaire is coming off December’s third-round knockout of Mexican former four-division titleholder Jorge Arce, having already made his 122-pound debut with last February’s split decision over ex-beltholder Wilfredo Vazquez Jr., and followed that up with a unanimous decision over South Africa’s Jeffrey Mathebula for the IBF title in July.

In October of last year, Donaire’s ninth-round stoppage of Toshiaki Nishioka, handed the legendary Japanese fighter his first loss since March of 2004 — a span of eight years and seven months.

Rigondeaux was scheduled to face Thailand’s Poonsawat Kratingdaenggym on the Donaire-Arce undercard at The Toyota Center in Houston before his rival’s licence was not allowed due to his failed medical exam, according to the Texas Department of Licensing and Regulation.

Donaire-Rigondeaux will be only the second bout to appear at Radio City Music Hall the venue’s 82-year existence. The first was Roy Jones’ unanimous decision over David Telesco on Jan. 15, 2000 in defense of his IBF, WBA and WBC light heavyweight belts.

A 33-year-old former IBF middleweight titleholder, Abraham dethroned Stieglitz by unanimous decision in August, and is coming off the first defense of his crown, an eighth-round stoppage of Mehdi Bouadla in December.

A 31-year-old who had made six defenses of the belt he won by 11th-round knockout over previously unbeaten Karoly Balzsay in August of 2009, Stieglitz is coming off last month’s third-round knockout of Michal Nieroda.

Mexico’s hard-hitting Julio Ceja (24-0, 22 KOs) will meet Britain’s Jamie McDonnell (20-2-1, 9 KOs) on May 11 for the IBF bantamweight title that was recently vacated by unbeaten Leo Santa Cruz in a clash that will happen at Keepmoat Stadium, Doncaster, Yorkshire, according to IBF Championships Chairman Lindsay Tucker.

Ceja, 20, will be after his fourth straight knockout victory, and McDonnell 26, his third consecutive stoppage win.

Also, Tucker said that Candada’s Dierry Jean (24-0, 16 KOs), a 30-year-old who is in search of his third straight knockout victory, will take on CIeotis Pendarvis (17-3-2, 6 KOs) in an IBF eliminator for the right to face junior welterweight beltholder Lamont Peterson.

A 26-year-old from who lives in Los Angeles, Pendarvis will be in pursuit of his seventh consecutive victory against Jean.

Super middleweight boxer-puncher, Edwin Rodriguez (22-0, 15 KOs) is coming off September’s eighth-round stoppage over hard-hitting Jason Escalera, and will be looking to do similar damage in Monaco on March 30 when he meets Ezequiel Osvaldo Maderna (19-0, 13 KOs), of Buenos Aires, Argentina.

“This has been an amazing training camp. [Trainer] Ronnie Shields and the guys at Peak Performance in Houston have me in amazing shape. I am ready to get into the ring and show the world who I am and what I am made of,” said Rodriguez, who is 27.

“I want to thank Golden Gloves, my promoter DiBella Entertainment and my manager Larry Army Jr. for this opportunity. I encourage everyone to tune in on March 30 to see me at the top of my game in the biggest fight of my career.”

“I have had a great training camp and I am excited to finally be departing for Monaco for what is going to be the most important challenge of my life,” said Maderna.

“We have wrapped up the final stages of training camp, and, come March 30, I will be ready for a war against Edwin Rodriguez.”

Rodriguez-Maderna is part of the a four-man elimination event called the Monte Carlo Million Dollar Super Four that will include Zsolt Erdei (33-0, 18 KOs) against Denis Grachev (12-1-1, 8 KOs).

Erdei has a large number his fans making the trip to Monaco.

“I am very happy that the Hungarian fans will have a chance to once again see me fight live and in person. It just multiplies my strength and will to win. I want to prove that the old man is not an old man. So far everything is going well,” said Erdei, who turns 39 in May.

“I have had no problem with my weight, the shape I am in is almost disturbingly good. The bumps are there, of course, over the many years of fighting, but I know that above anything else, my power is still there, and Grachev will find that out on March 30. I’m going to prove that I am still one of the top fighters in the world.”

The two Super Four winners will fight for a 60/40 share of one million dollars on July 13 in Monaco as part of a show that is being co-promoted by DiBella Entertainment and K2 Promotions.

“This has been the hardest training camp that I have ever had,” said Grachev. “I have already made my plans to be back in Monaco in July,”

Golovkin who stopped Gabriel Rosado in the seventh round at Madison Square Garden in Janurary, will attempt to do the same to the durable Ishida, who has never been stopped.

“I’m very excited, the phone hasn’t stopped ringing,” said promoter Rodney Berman, of Golden Gloves. “We have broadcasters from all over the world taking the fight and we’re expecting many fans from the boxers’ countries to attend. This event has really struck a chord.”