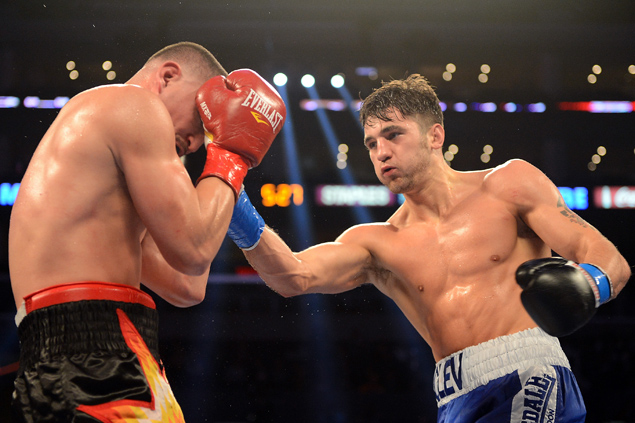 It has been a tough couple of days for undefeated WBO light heavyweight champion Nathan Cleverly.

The piping fit pressure puncher from Wales will not be defending his title against Robin Krasniqi on March 16th, due to the rescheduling of Frank Warren’s Rule Britannia show in London, and now looks on in frustration as another significant battle at 175 pounds takes place without his name attached.

Prior to the postponement of his bout Cleverly took time to discuss Tavoris Cloud versus Bernard Hopkins, which takes place on Saturday at Barclays Center in Brooklyn.  The undefeated Cloud will be defending his IBF title against Hopkins who, at 48 years of age, bids to break his own record by becoming the oldest world champion in boxing history.

Cleverly spoke highly of both men before offering his own insight into what will unfold when the opening bell rings in New York.

“Cloud is a very good fighter,” said THE RING’s No. 3-rated light heavyweight. “He’s attack minded and can be really ferocious and powerful. Tavoris enjoys fighting on the front foot and, like myself, puts his punches together very well.”

Cleverly continued; “Hopkins is a legend in the sport. He’s technically excellent and at this stage of his career uses every trick in the book. He’ll hold, spoil, buy time and steal rounds in the most energy efficient way possible. He’s still capable of implementing that game plan so this should be an interesting fight.”

When asked for an official prediction Cleverly has tipped The Executioner for one last piece of miracle work.

“Cloud has ambition but Hopkins might know too much for him,” stated Cleverly. “I think he knows how to win this one and will spoil his way to victory. I doubt that it’ll be a fast paced fight because Bernard won’t allow it to be.”

“I think Hopkins will take away Cloud’s strengths, pick up the points, and win aclose one.”

When asked about the possibility of facing the winner Cleverly deliberated as much over the venue as he did the opponent. Would it be the Millenium Stadium in Cardiff, which holds over 70,000 fans, or one of the glossy casinos in the bright lights of Las Vegas?

“Let’s go for Vegas against Hopkins” laughed the champion. “I think proving your worth on American soil is important.  Bernard is at the end of his career but, if he wins this fight with Cloud, a match-up between him and I would be spectacular.”

“Would I know enough to beat someone with that experience or will he outsmart me?  You would have the young up and coming champion versus the old warrior but, being honest, I have too much ammunition for Hopkins right now and I know it.”

“If Hopkins falls short I’m equally confident that I could beat Tavoris Cloud.”

Nathan Cleverly, for now, is scheduled to make his return on April 20th at Wembley Arena against Krasniqi, who is his mandatory challenger.

Tom Gray is a member of the British Boxing Writers’ Association and contributes to various publications. He compiles the boxer profiles and fight breakdowns for Frank Warren Promotions’ official fight programmes. Follow him on Twitter: @Tom_Gray_Boxing