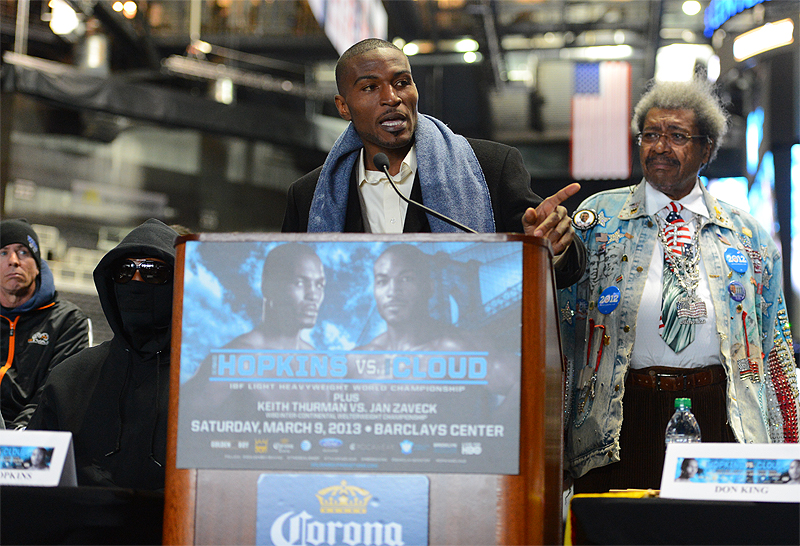 BROOKLYN, N.Y. — Known for his gamesmanship as well as his “Executioner” nickname, Former RING light heavyweight and middleweight champ Bernard Hopkins‘ act used to include providing his “victims” with a ceremonial “last meal” at the final press conference.

On Wednesday at Barclays Center, site of Saturday night’s HBO-televised battle with rugged and unbeaten IBF 175-pound titleholder Tavoris Cloud, Hopkins re-awakened that dark imagery, sporting a black hoodie and a ski mask that covered all but his eyes, which were shrouded by dark shades.

Hopkins, who turned 48 in January, sat virtually motionless throughout the event, never saying a word or revealing his face and leaving some in the audience to openly wonder if the man on stage was truly Cloud’s opponent.

Instead, he allowed his trainer, Naazim Richardson, do the talking.

“Now, I’m going to tell you right now, so you don’t get upset: Bernard Hopkins already has left the building. Bernard Hopkins has gone back home, I believe. But he will be here ringside to see the fight. Don’t worry, because the Executioner is still here,” said Richardson of Hopkins, who is 17 years older than Cloud.

By defeating Cloud, 31, Hopkins (52-6-2, 32 knockouts) can eclipse his own record as the oldest man to win a significant crown, a feat the Philadelphia native accomplished at the age of 46 with a unanimous decision over Jean Pascal for the WBC’s light heavyweight belt in May of 2011. 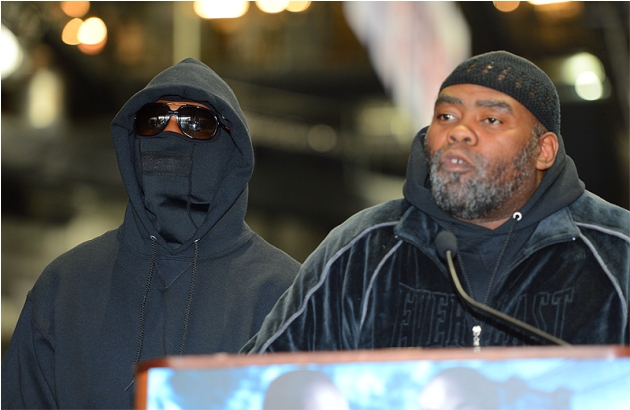 Hopkins’ effort surpassed that of George Foreman, who was 45 when his 10th-round knockout of Michael Moorer made him the oldest man to win a heavyweight title in November of 1994.

Hopkins rose from knockdowns in the first and third rounds to salvage a disputed majority draw with Pascal in December of 2010, and was later dethroned as the WBC’s light heavyweight beltholder by Chad Dawson in April of last year.

When Richardson was done, he and Hopkins left the stage without a staredown opposite Trout, and, withoutt a word from Hopkins.

Cloud seemed unaffected the antics of Hopkins, which he called, “childish,” and, “funny.”

After being floored twice in the first round, Campillo appeared to take control of the fight, doing damage that sliced open cuts around each of Cloud’s eyes.

But it was Cloud who was named the winner of an unpopular verdict, 116-110 (eight-to-four in rounds) and 114-112 (six-to-six) on the cards of judges David Robertson and Joel Elizondo, respectively. Judge Dennis Nelson had it for Campillo, 115-111. 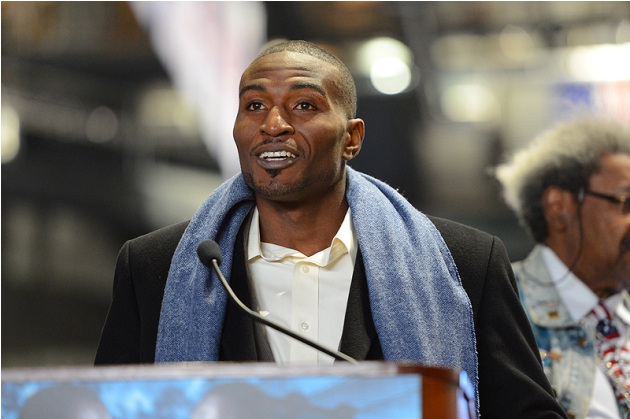 “If you talk about the Campillo fight, I don’t even count that fight, because Campillo wasn’t taken as a serious threat as he should have been. But that’s youth, and he’s learning. You’re going to see the best Cloud you’ve ever seen come up against the Executioner,” said Richardson.

Cloud agrees that he will be an improved fighter against Hopkins, having worked in the altitude of Big Bear Lake, Calif., under the guidance of new trainer, Abel Sanchez.

“We started at the bottom, but we’re going to put that bologna way in the back, because we’re going to get some steak now. I want to thank Abel Sanchez, my new trainer, for allowing me to come into his training camp and making me one of his own. I’ve trained very hard up there in Big Bear,” said Cloud, whose workouts include sparring sessions with Golovkin. 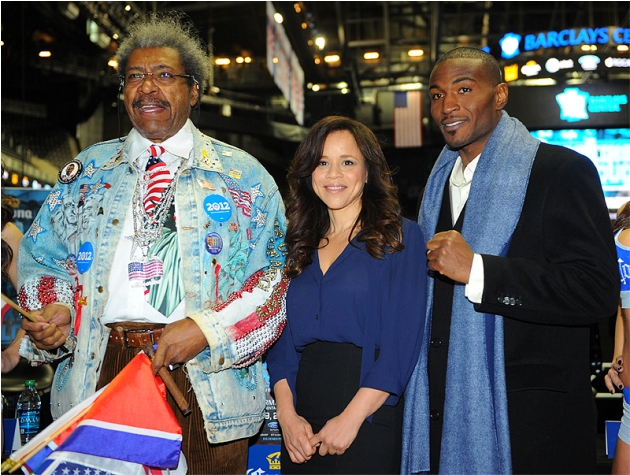 After winning the IBF middleweight title from Segundo Mercado on April 29, 1995, Hopkins went on to defend it a record 20 times before losing to Jermain Taylor by a split decision on July 16, 2005.

After he lost to Taylor, and then endured an immediate rematch loss, Hopkins rose into the light heavyweight division for triumphs over Antonio Tarver, Winky Wright, Kelly Pavlik, Ornelas and Roy Jones, his lone defeat prior to Dawson in the division being by split-decision against Joe Calzaghe.

Cloud recognizes the task before him in Hopkins, whom he feels will bring out the best in him.

“Fighting a fighter like Bernard Hopkins, who is supposed to be a legend, it puts me in that frame of mind, that, you know, Cloud, you know where you stand in the game. You kept working hard. Now, you’re going to get your shot to be on T.V. and be in a fight like that. It’s real exciting for me. From the jump, from the start, it put me on my toes. It really put me on my toes. I know he said he’s going to be victorious. I’m going to put on a great show.”

Thurman is coming off a fourth-round stoppage of former WBO 147-pound beltlholder Carlos Quintana that took place on Nov. 24 — the day after Thurman’s 24th birthday. The rugged Zaveck, who turns 37 in March, was last in the the ring in March of last year when he unanimously decisioned Bethuel Ushona.

Prior to Ushona, Zaveck was dethroned as IBF beltholder by Andre Berto, who stopped him in five rounds in September of 2011.

Actress Rosie Perez was also in attendance at the press conference. Cloud is promoted by Don King, and Hopkins, Golden Boy.