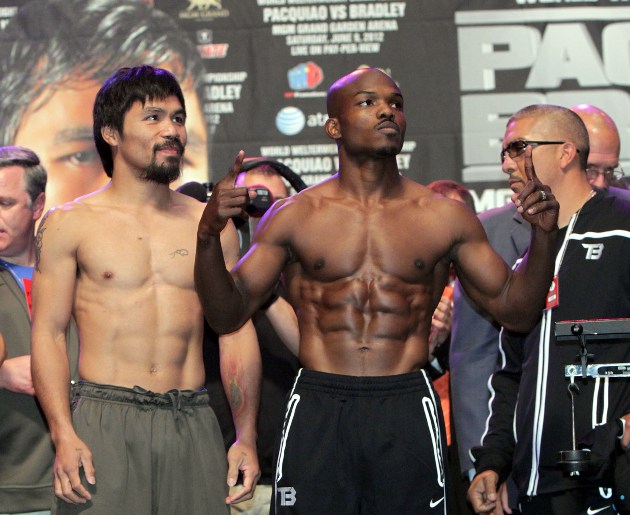 The comments by Bradley (29-0, 12 knockouts), made during a Tuesday conference call promoting his clash with Provodnikov (22-1, 15 KOs), included his belief that Pacquiao was deserving of December’s loss by sensational stoppage to Juan Manuel Marquez, whom Pacquiao decided to face for a fourth time rather than take a November rematch with him.

A 29-year-old from Palm Springs, Calif., Badley faces in Provodnikov a fighter who, like Pacquiao, is trained by Freddie Roach.

A former Pacquiao sparring partner, Provodnikov has won five consecutive fights as a junior welterweight, four of them by stoppage, and is coming off June’s second-round knockout of Jose Reynoso that ended the loser’s unbeaten streak at 6-0-1.

Provodnikov’s lone defeat came opposite Mauricio Herrera (18-3, 7 KOs) in January of 2011 at 140 pounds, and he will be making only his third appearance at 147 pounds against Bradley.

Bradley, however, has employed Herrera among his sparring partners, and vows that Provodnikov will not last the full 12-round distance against him.

“Tim has not had a bad day in sparring. He’s been looking really, really good. As far as getting ready for the fight, Tim could fight this weekend. That’s how ready he is. He always prepares 100 percent. He’s doesn’t take anybody lightly, regardless of who it is or what style they’ve got. Ruslan has his style, and I know that he’s training really hard because this is a great opportunity for him,” said Bradley’s trainer, Joel Diaz.

“But I’ve studied Provodnikov every night, and I’ve watched a lot of his fights, and I mean he doesn’t change much. He’s a very basic fighter. He’s got some power in his fists, but to catch a Tim Bradley, it’s going to be really, really hard. Tim is really smart, and his boxing ability is great, and now, his punching power has increased because we’ve made some adjustments. You’re going to see a different Tim Bradley on March 16. Don’t be surprised. This fight’s not going to go the distance.” 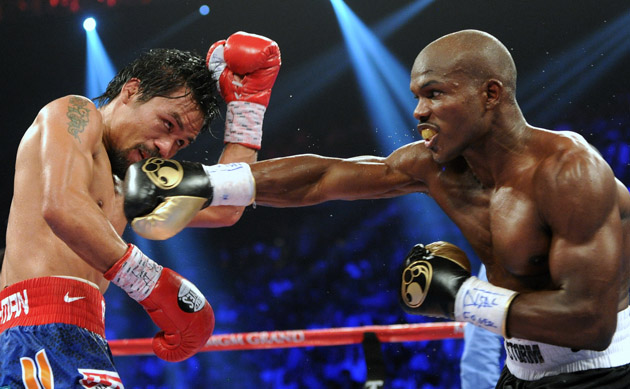 A two-division, three-belt titlewinner, Bradley also dethroned Kendall Holt by unanimous decision for the WBO’s 140-pound belt in April of 2009, rising from two knockdowns to do so.

Bradley also owns a unanimous decision from July of 2007 over current IBF lightweight titleholder Miguel Vazquez (33-3, 13 KOs), as well as an eighth-round knockout of former Olympic gold medalist and ex-beltholder Joel Casamayor at 140 pounds in November of 2011.

Bradley said that his left foot was fractured and his right sprained early in the Pacquiao fight. Both feet were in splints, and Bradley was wheelchair-bound for some time afterward.

Bradley said that he was hobbled from the second round on after hearing a “pop” in his left foot, and that his right became damaged somewhere during the middle of the fight, which ended a 15-bout winning streak by Pacquiao that had included eight knockouts.

But none of those matchups came to fruition. Gamboa unanimously decisioned Michael Farenas for the WBA’s interim junior lightweight belt in December, and Guerrero did the same in November against Berto.

“We had been offered the Guerrero and the Berto fights. We had agreed to the fights. HBO was brokering a deal for us to go in December, and we were going to go to Marlon Stadium in Florida, and we were waiting for them to wrap that up,” said Top Rank President Todd duBoef.

“Both of them declined to fight and decided to fight each other. That was the real other significant offer that we were looking at. And then, it came down to Peterson, and Tim expressed himself that, ‘Listen, I’ve already fought this guy, let’s go onward and upward and that was it. The Gamboa fight was the one for March. We went down the road with him hoping to get that confirmed, and, unfortunately, they didn’t want the fight either.”

Below are a few of the comments made by Bradley on Tuesday.

Tim Bradley on the death threats:

“People said that I was undeserving. There were a lot of different things that went on…They came in the mail. Mail and phone calls. I didn’t report anything because I know that people were just mad.

To me, people were mad, and when they’re mad, they do certain things. So it’s not like someone is in front of my house and trying to take me out. I don’t think that would ever happen.” 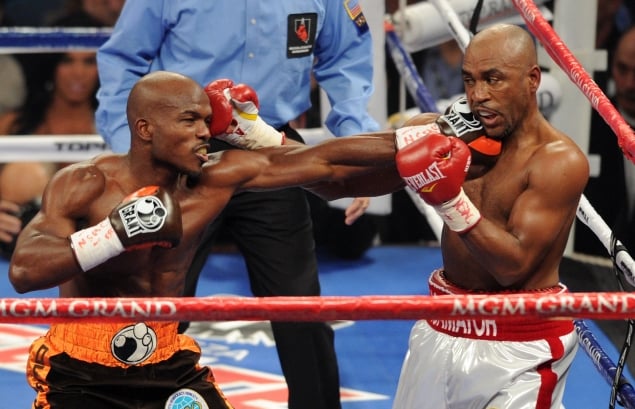 On life after the Pacquiao fight:

“Hell no. It ain’t been great over here. You know, the only thing that has been great is that I’ve been able to spend a lot more time with my family and stuff.

“What is not important is the certain things that people think of me. That’s not important. I don’t care. Everybody has an opinion.

“They can say whatever they want to say, but it’s not going to stop me from doing what I do. That’s be a man and kick butt in the ring. What’s important is my family.

“I need to just focus on my career and my life and my family and what I’m doing, and stop reading all of this garbage that all of these people are writing about me.

“I’ve stopped reading the garbage. I used to read it all of the time, but I don’t read it anymore. I didn’t get any credit for the Pacquiao fight whatsoever.

“But it doesn’t matter, because none of those people have ever stepped into the ring with me. If that happened, they would get a beat-down for sure.

“If you knew what I go through, and you knew how hard I trained, and still talked bad about me, then you’ve got the problem.

“People can say whatever they want to say, because they’re trying to sell papers, I guess, and they don’t really know who I am. But I’m the nicest guy that you’ll ever meet on the street, man.” 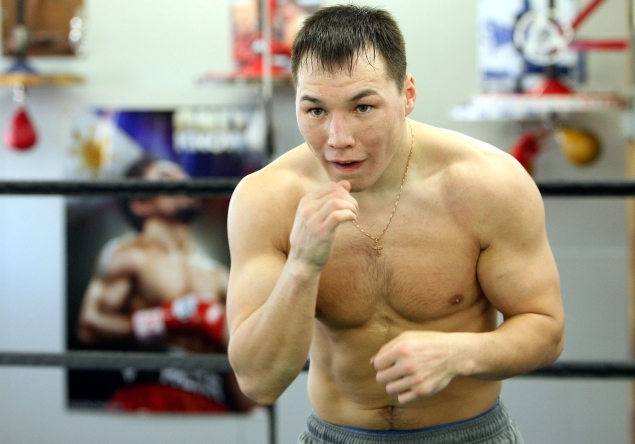 On making a statement against Provodnikov:

“I’m always trying to make a statement, so this is going to be a statement fight for me right now, especially coming off of the Pacquiao fight.

“So, absolutely, I’m looking to make a statement in this fight. I’m looking to do some damage to this guy. I want to put this guy out. I don’t want to go 12 rounds with this guy at all.

“So the longer he stays in there, the more confidence he builds, and he’ll keep coming forward and keep battling. So I want to get him out of there as soon as possible.”


On Provodnikov’s power relative to Abregu, Holt, Pacquiao and Peterson:

“What he needs to do is that he needs to worry about my power. I’m not worried about anything this guy is going to bring. He’s a straight-forward fighter and head is in the middle all of the time.

“I’m just going to go in there and out-box him. But at times, you’re going to see me standing in there and banging as well when I feel comfortable. So Provodnikov’s got to worry about me. I ain’t worried about him.”

“My speed will still be there, as well as my power, but basically we’ve been working on a lot of technique, man. We’re in there relaxing, and I’m working on turning over my shots.

“We’ve been really working a lot on turning over my shots, and sitting down on my shots, and making them harder and more effective. A lot of my sparring partners are feeling my power, and they definitely notice the difference in my punches.

“Because a lot of them are saying, ‘What is he doing differently?’ Because I’m getting stronger and stronger, you know?”

On sparring with Herrera:

“We don’t exchange with him. We apply pressure, but we’re applying smart pressure. He’s always going to be right up in your face. That’s what he does for us.”

On why he elected not to face Peterson or anyone else in December:

“It took a while for my feet to heal. I could have fought in December, but my feet were not at 100 percent. I still could have fought, and it was in the back of my mind whether or not I was ready.

“It was a combination of the two things, but mainly, it was because I didn’t want to fight Peterson…We were talking to Gamboa’s camp for a while.” 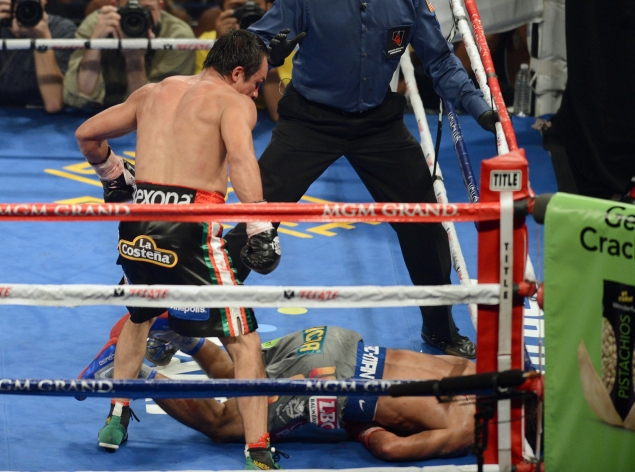 On Marquez’s knockout of Pacquiao:

“You want the devil side of me or the good side in me. Both sides? Everybody has their alter ego. So, the bad side of me said, ‘That’s what you get for not rematching me.’

“And then, the other side of me was saying, ‘Damn, that could happen to anyone. He fought a helluva fight, and I can’t believe that this is happening.'”