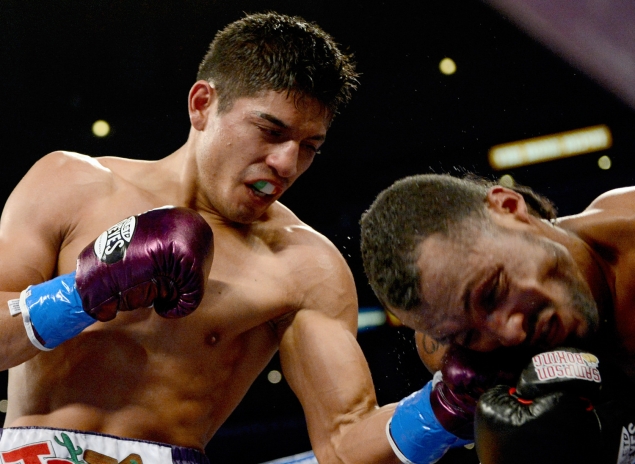 Schaefer has targeted Barclays Center in Brooklyn for a Showtime-televised June 22 return by WBA welterweight titleholder Paulie Malignaggi, a native of Brooklyn.

RingTV.com was also informed that Mexican former junior middleweight contender Alfredo Angulo is being considered for the Mayweather-Guerrero undercard, which will be happening on Cinco De Mayo weekend. Angulo would likely be matched opposite a Puerto Rican opponent, according to his manager and counsel Michael Miller.

Schaefer has confirmed The Alamodome in San Antonio, Texas, for Alvarez-Trout on Showtime, and, also, The MGM Grand in Las Vegas as the site for Mayweather-Guerrero.

There is also “a possibility” that unbeaten 23-year-old prospect Omar Figueroa (19-0, 15 knockouts) “is going to be on,” the Alvarez-Trout card, said Schaefer. “Maybe even against the winner of this weekend’s title fight between Abril and Bogere.”

Schaefer was referring to a potential matchup between Figueroa and the winner of Saturday night’s Showtime-televised clash with unbeaten contender Sharif “The Lion” Bogere, of Las Vegas by way of Uganda, and WBA lightweight beltholder Richard Abril, of Miami, at The Joint at The Hard Rock Hotel and Casino in Las Vegas.

Schaefer has “received confirmation” of a Showtime doubleheader for May 18 at Boardwalk Hall in Atlantic City, which will feature IBF welterweight titleholder Devon Alexander vs. undefeated Englishman Kell Brook, and likely headlined by a junior welterweight match between IBF beltholder  Lamont Peterson and THE RING’s No. 1-rated 140-pounder Lucas Matthysse.

“We are getting close on getting the fight done between Lamont Peterson and Lucas Matthysse,” said Schaefer. “If, in fact, we’re going to be able to pull this off, I think that it will be one of the biggest doubleheaders, and one of the biggest one-two punches in boxing in recent times. So that looks like that’s done.”

On June 8, at The Home Depot Center on Showtime, welterweights Marcos Maidana and Josesito Lopez will be part of a tripleheader.

“We have Josesito ‘Jaw Breaker’ Lopez agianst Marcos ‘Knockout King’ Maidana. That’s going to be ultimate fireworks from the Home Depot Center,” said Schaefer. “This fight will be part of a tripleheader televised by Showtime, and we’re working on the other two fights.”