Hopkins not ready to retire, vows to school Cloud on March 9 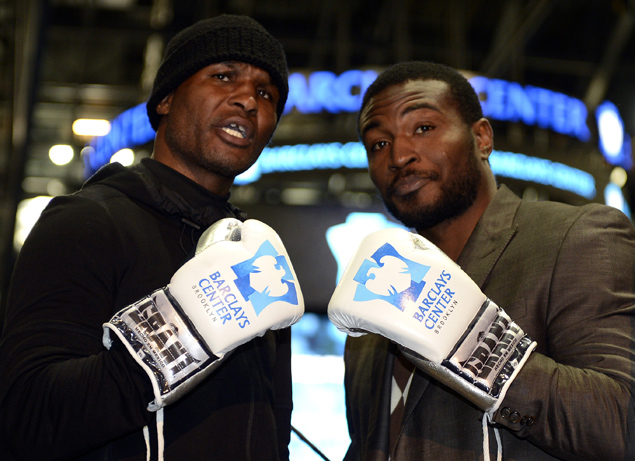 It’s been said before. It may be said again.

Bernard Hopkins is too old and needs to hang ’em up.

That was the prevailing sentiment after the 48-year-old living legend lost to Chad Dawson in their rematch last April. But “The Executioner” has been written off before.

Hopkins, the oldest boxing champion of all-time, believes he will break his own record and hush the media once more when he takes on undefeated Tavoris Cloud for the IBF light heavyweight title on March 9 at Barclays Center in Brooklyn, N.Y. (HBO). That was the belief Hopkins shared on a Wednesday conference call where the veteran did what he does best – talk.

“I know I’m the better fighter, better IQ fighter and better conditioned fighter,” said Hopkins (52-6-2, 32 knockouts). “I believe that when I got in that ring and Cloud is thinking something else he’ll be very surprised. He’s fighting someone almost double his age. It’s natural that someone will say ‘this ain’t gonna happen to me, he’s a couple of years younger than my father or mother.’

“He’s going to have to adjust mentally and then physically. This ain’t the first time a fighter froze up in the ring when they realize something is different.”

The fact that Cloud is promoted by Hopkins nemesis Don King is an added bonus for the Philadelphian. Hopkins hopes to thwart King’s remaining days as a promoter by defeating his biggest fighter.

“I’m not fighting his promoter but my career was based on beating his top guy,” said Hopkins in reference to his career-best win over Felix Trinidad in 2001. “I’m glad to be able to reunite and get rid of the last guy that he has.”

Hopkins said he never considered retirement, even after the loss to Chad Dawson, a fight he was never in competitively.

“I’m not counting age, everyone else is counting it,” he said. “I’m 100 percent healthy when I step in the ring come March 9. I don’t have to worry about shoulder, elbow, or anything. No time limits, or this or that. You’ll see a healthy Bernard Hopkins. I can say (on) March 9, I will go in there healthy, strong, ready, not worried that if I throw a right hand something will pop out. I don’t want to hear I was lucky, I just want to hear ‘well done, what’s next?'”

Cloud (24-0, 19 KOs) believes Hopkins is “ripe for the picking” and thinks his time is up. But is he making the same mistake so many others have made before him?

“I don’t think any fighter can stay young forever no matter how hard they try,” said Cloud, who is 31. “It’s evident that he’s slowed down in the last couple years – he’s definitely slowing down.”

The former middleweight and light heavyweight champion attributes his middle-aged success to clean living and “living the life of a fighter.” He knows that what he has accomplished is special.

“If you do the right things into your 40s, you can have a great, prosperous career,” said Hopkins. “I doubt very seriously that you will see longevity like mine in any sport for a long time. I want to see a Bernard Hopkins in any sport, whether its basketball, baseball or hockey. [Michael] Jordan just turned 50 and on ESPN he said he wished he could play again, but he can’t do it anymore.”

With a win on March 9, Hopkins will once again own a share of the light heavyweight crown and would set the mark for oldest champion in boxing history at 48. The record now stands at 46, set by Hopkins’ defeat of Jean Pascal in 2011.

“A lot of people know that I can still win a championship and they try to use my age as a death sentence,” said Hopkins, now a partner with Golden Boy Promotions. “I’ve been hearing I’m old since I beat Trinidad when I was 35. After March 9, what are they gonna say then?”