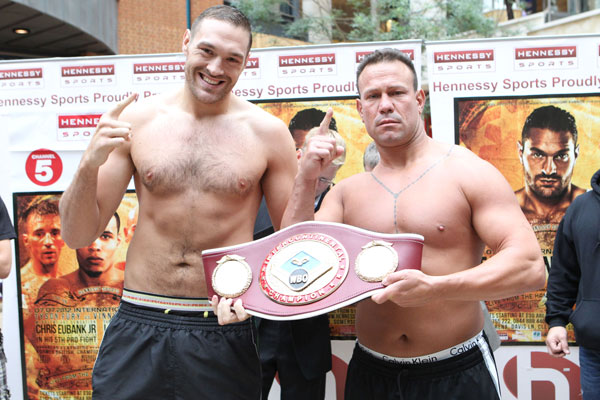 “I’m looking forward to getting back in the ring on April 20th to face Fury. For the first time in my career I have a guy coming to my country to face me,” said Cunningham, who has often fought overseas.

“I am certain he’s never faced a fighter like me. What an amazing opportunity to fight in historic Madison Square Garden and return to NBC again. I am prepared to fight a great fight and come out with a victory.”

Fury-Cunningham will be televised on NBC’s Fight Night at 4 p.m.

“This is a dream debut in the US for Tyson as this fight is also being shown live on network TV. It just doesn’t get any better than this.”

Fury (20-0, 14 knockouts) has weighed as much as 270 for a bout and is coming off December’s unanimous decision over Kevin Johnson, a bout which ended the the Englishman’s streak of four straight stoppage wins.

“Cunningham’s got all the tools. A former world champion, good fighter, he’s got a lot of skill. I’m looking to put on a devastating performance, the best of my career to date,” said Fury.

“I’m absolutely ecstatic to be fighting at Madison Square Garden. It goes back in history and I can’t wait to put my name with a long list of champions who have fought there. I’m a historian of boxing myself, so this is definitely the pinnacle of my career so far.”

Cunningham (25-5, 12 KOs) stands 6-3, will be fighting as a heavyweight for only the third consecutive time, and weighed a career-high 207 pounds for his debut in the division — September’s unanimous decision over Jason Gavern.

“Giving Steve the opportunity to fight on NBC again, in a bigger venue for another shot at the No. 2 position in the IBF after his controversial decision loss to Tomasz Adamek in December is what Main Events and Fight Night are all about,” said Main Events President Kathy Duva.

“Steve put on a fantastic performance against Adamek and deserves to be rewarded with this fight. We also get to introduce Tyson Fury, a young heavyweight contender, to the American public in a true crossroads match.”