Burgos ready to cash in on opportunity 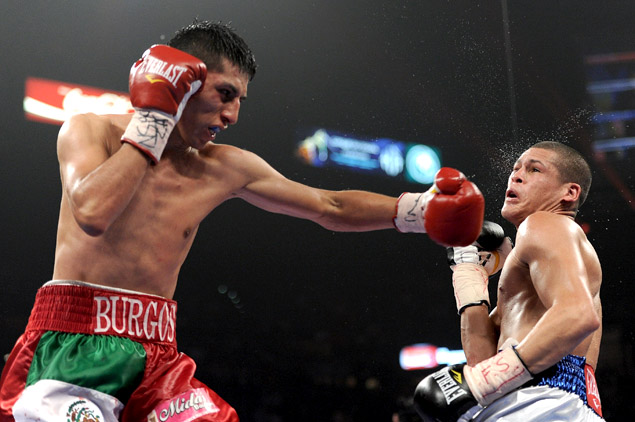 Juan Carlos Burgos bangs the heavybag and the immediate picture that comes to mind is a construction worker with spackle-stained boots trudging to work in the morning. It’s workmanlike, efficient, calculated — all elements ingrained at a very early age.

His commitment and devotion to his craft once forced him to watch his uncle, Victor Burgos, leave the ring pinioned to a stretcher clinging to life after a war with Vic Darchinyan. No matter.

Be scared off? You kidding? Turn and run from the very vocation that seems like a family heirloom? Never.

Boxing is in the blood of Juan Carlos Burgos. A microscope might reveal tiny boxing gloves floating in his plasma.

On Saturday night at Madison Square Garden, Burgos will have the chance to shine on the largest platform of his career when he takes on WBO super featherweight champion Roman “Rocky” Martinez (26-1-1, 16 knockouts) as part of HBO’s action-packed Boxing After Dark tripleheader, which also features Orlando Salido vs. Mikey Garcia and Gennady Golovkin vs. Gabriel Rosado.

Burgos-Martinez promises to be intense. It overlaps the geographic rivalry between Puerto Rico (Martinez) and Mexico (Burgos). It also pits two young veterans who have had a combined 59 fights, and between them, are an impressive 56-2-1 (36 KOs).

The 25-year-old Burgos (30-1, 20 KOs) was a little over two weeks shy of his 17th birthday when he began his pro career. He’s fought in every venue imaginable, from Dover, Delaware, to the grandest of stages, the MGM Grand in Las Vegas. 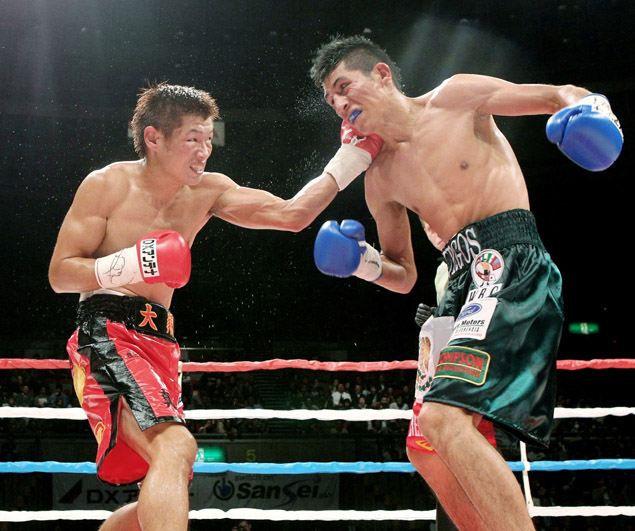 Along the way, Burgos has done things not many expected. In two of his last three fights, The Ring’s No. 7 junior lightweight contender knocked off two undefeated fighters. First was Burgos’ breakthrough victory over 19-0 Luis Cruz on the Manny Pacquiao-Juan Manuel Marquez III undercard, on November 12, 2011.

Then, Burgos set himself up for the shot at Martinez with a sterling third-round TKO over 25-0 Cesar Vazquez on July 20, 2012.

This marks Burgos’ second major title shot. His firstÔÇöwhich is his only professional setbackÔÇöcame against Hozumi Hasegawa for the vacant WBC featherweight title, in Nagoya, Japan. Burgos, who is co-promoted by Thompson Boxing and Banner Promotions, didn’t feel he was fully prepared for that step.

This time, he says, he’s more than ready for Martinez. It seems he’s been groomed for this his whole life.

“My family and where I come from, that inspires me and motivates me,” Burgos said through an interpreter. “My uncle, Victor, was a world champion and I look to keep the family tradition alive. I started boxing when I was nine, but I used to be around the gym all of the time, since I was a little. I used to watch all of my uncle’s fights and my father was an amateur boxer. I come from a long line of boxers.

“You can say I grew up around boxing. I don’t consider myself super talented, but God has given me this talent, and I’m extremely motivated for this fight. I know how important this is for me and my family. It would be the greatest victory of my career and it would pay for that hard work. But I think it’s true, I was destined to be a boxer and it’s always been my dream to be in this position.”

Entering the Martinez fight, Burgos feels his height and reach will be important advantages. He holds a half-inch height edge, listed at 5-foot-8¾, to Martinez’s 5-8. Burgos also holds a slight reach advantage, too, at 68 ¾ inches to 67.

“My height and reach are advantages, but I think the other advantages are I’m a boxer that can also brawl,” Burgos said. “I know his style and that will mesh well with mine. I think every time I have an opportunity, I consider myself a better boxer than Martinez. I know I can outbox him. I feel I have more power than Martinez and I will use it.” 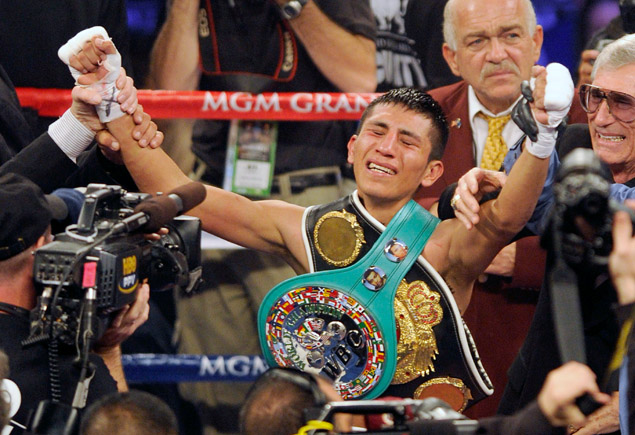 Though Burgos did admit he is a somewhat leery of Martinez’s power.

“He’s a world champion and he has decent power,” Burgos said. “But the kind of fighter he is, he takes a lot of punishment to dish out the punishment. I’m not going to play that game. I believe this is my time, and it’s something that I’ve been waiting for my whole life. I plan on sticking to my game plan.”

Burgos’ design is to jump early and not give Martinez any breathing space. “I don’t want to wait too long,” he said. “I want to show the world why I’m here, and I’m here for a reason. I want to use smart pressure.”

Burgos is happy about the move from featherweight to junior lightweight. He says he’s much stronger and a little faster. It’s been a good decision.

He’s also done a lot of growing up, especially since the Hasegawa defeat. It was Burgos’ first fight at featherweight, and moving up from 118 to 126, he felt considerably stronger. That sense, however, got in the way of his approach.

In the back of his mind, he harbors a stark mistake he vows he won’t repeat.

“That was the biggest thing that’s happened to me in my career, losing to Hasegawa in Japan,” Burgos said. “I was a little too confident going into that fight, and that taught me that I should never be over-confident. I know I lost that fight, but it didn’t feel right to lose that fight. But I know I lost it. I don’t ever want to feel that way again. It was probably the worst experience of my career.”