10: Greatest “above and beyond” performances

For those lucky enough to have witnessed them, they are moments deeply etched into memory:

* May 8, 1970: Just before Game 7 of the NBA Finals against the Los Angeles Lakers, New York Knicks center Willis Reed – thought to be scratched due to a torn thigh muscle – walked onto the court during warm-ups to a thunderous ovation from the Madison Square Garden crowd. Reed then scored the Knicks’ first two field goals on jumpers and from there the New Yorkers were off and running. Although those baskets were Reed’s only points, the emotional charge created by his mere presence – combined with Walt Frazier’s 36 points and 18 assists – was enough to carry the Knicks to a 113-99 victory and New York City’s first NBA title. 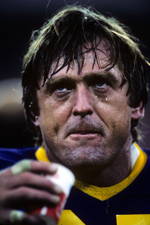 * January 20, 1980: Los Angeles Rams linebacker Jack Youngblood improbably stepped onto the turf at the Rose Bowl in Pasadena to compete in Super Bowl XIV against the defending champion Pittsburgh Steelers. The reason why the word “improbably” applies is that Youngblood was about to play his third consecutive playoff game with a fractured left tibia, an injury he incurred during the Rams’ 21-19 win over the Dallas in the divisional round 22 days earlier. He continued to play in their NFC title win over Tampa Bay and – a week after losing the Super Bowl to the Steelers – in the Pro Bowl. A recent NFL Network poll deemed Youngblood’s feat the “gutsiest performance” of all time.

* June 12-16, 2008: Tiger Woods captures his 14th major title at the U.S. Open on a left knee missing an ACL as well as two stress fractures in the same leg. Even more inspirational is that Woods achieved his goal after enduring golf’s version of overtime, sinking the final putt on the first sudden-death hole following an 18-hole playoff against Rocco Mediate. Already a golfing legend, Woods ascended to nearly demi-God status following his captivating performance.

Those are just three examples of athletes who overcame serious injury to emerge victorious. Although playing in pain is part of the athletes’ code, only a select few choose to go above and beyond the bounds of human endurance. Hockey players are legendary for their toughness in the face of adversity but if one group of athletes can claim to be even more resilient it is boxers.

The pain threshold required to box under normal circumstances is above that of most people, but one can barely fathom how much more fortitude is needed to press forward with otherwise debilitating injuries. Just the thought of fighting a healthy person while handicapped in this way – much less come out the winner – is unfathomable.

Yet it has been done, and this list will recount 10 such instances. Boxers in general are rugged and brave but the following fighters achieved a level of valor that challenges the parameters of words. (Click on the NEXT button at the bottom right of the page to view Nos. 9 through 1.)

When it came to combined physical strength few pairings in history were as robust as Fullmer vs. Fernandez. Fullmer, the “Cyclone” from West Jordan, Utah, utilized strength-sapping aggression and a never-ending stream of hard, winging punches to punish his opponents over the long haul and his efforts gained him two reigns as world middleweight champion. The opponent for the sixth defense of his second reign was Fernandez, a 30-2 Cuban armed with a pulverizing left hook that scored many of his 24 knockouts. His nickname – “The Ox” – reflected just how dangerous he was in general and to Fullmer’s title reign in particular. 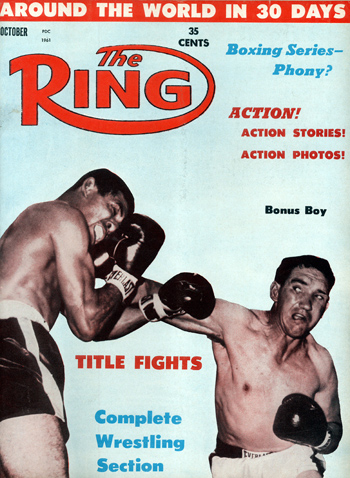 Though Fullmer engaged in multiple wars with Sugar Ray Robinson, Carmen Basilio and Dick Tiger as well as singular battles with Gil Turner, Rocky Castellani and Joey Giardello, he would call his lone encounter with Fernandez the toughest fight he ever endured.

By alternating between long-range boxing and chest-to-chest warfare Fullmer built a lead on the cards through 11 rounds. But late in the 12th Fullmer felt a tell-tale snap in his left elbow and the effects were unmistakable.

“The pain made me sick to my stomach,” Fullmer said in a story by Boxing.com’s Mike Casey. “The pain from my elbow was going through my whole body and it seemed to settle in the nerve center of my stomach. I was worried, real worried. How was I going to get through the next three rounds with only one arm? Would I be able to stand the pain? Would I empty my stomach right in the center of the ring?”

Fortunately for Fullmer – and everyone else – that didn’t happen. Instead Fullmer burrowed inside and winged clubbing right hands with all his might while using the left just often enough to keep Fernandez honest. The jabs and hooks awkwardly flailed through the air and, as Fullmer feared, Fernandez launched a furious attack during the first half of the 14th that drove the defending titlist in an unfamiliar direction – backward. But Fullmer dug deep, weathered the storm and produced his own rally in the round’s second half to snuff out the challenger’s rally. That surge may well have saved Fullmer’s title, for the pair fought evenly in the final three minutes and Fullmer retained his title by split decision.

“Never once during the panic that ran through my mind did I think of quitting,” Fullmer said. “I had every excuse in the world to call it quits in my corner at the end of the 12th. Nobody would have called a guy with a broken elbow a quitter. Certainly I would have had another chance at Fernandez, even if I quit right there. But, like I say, it never even came to my mind.”