Nonito Donaire is voted Fighter of the Year for 2012 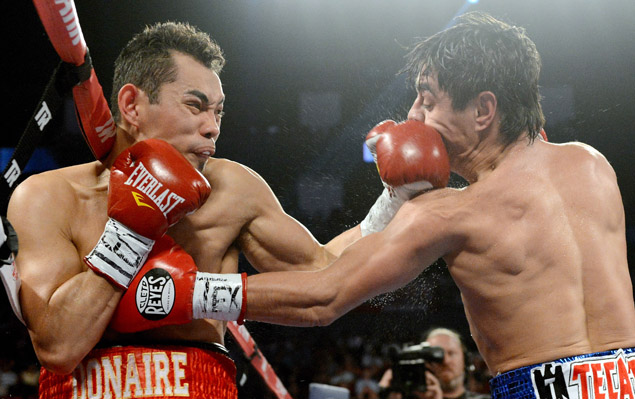 Nonito Donaire made two undeniable statements in 2012, one was old school; the other was new school.

The old-school statement was that he fought often by today’s standards.

It wasn’t uncommon for the top fighters of boxing’s Golden Age to average as many as 10-12 bouts a year. Today’s world-class fighters, who only fight on subscription cable network dates or on pay-per-view shows, are considered extremely busy if they fight half as many bouts a year. Elite fighters – those precious few who fans and boxing media view as the pound-for-pound best, seldom fight more than twice a year.

Donaire was the exception to that rule in 2012. The 30-year-old veteran fought four times in 2012 and in the process of doing so the former flyweight and bantamweight titleholder established himself as the best 122-pound fighter on the planet, as well as the Fighter of the Year in the eyes of the fans who took part in RingTV.com’s year-end awards poll.

Marquez scored the Knockout of the Year in the Fight of the Year by icing his arch rival Manny Pacquiao in the sixth round of what RingTV.com readers also deemed the Event of the Year, but those same fans recognized that Donaire accomplished more than the Mexican legend inside and outside of the ropes.

In the ring, Donaire won the vacant WBO 122-pound title by out-pointing Wilfredo Vazquez Jr., who he dropped en route to scoring a split decision that should have been unanimous in February. Donaire unified junior featherweight titles by taking the IBF belt from Jeffrey Mathebula, a formidable 6-foot South African veteran who was floored and suffered a broken jaw on the way to losing a unanimous decision to the Filipino-American star in July.

Three months later, Donaire defended those belts with a ninth-round TKO of THE RING’s No. 1-rated junior featherweight Toshiaki Nishioka. The dominant victory over the Japanese beltholder, who had not lost a fight in more than eight years, earned Donaire THE RING’s vacant junior featherweight title, which he defended with a one-sided third-round knockout of rugged Mexican veteran Jorge Arce on Dec. 15.

Donaire fought four significant bouts in a 10-month span, three of which were against RING-rated contenders. Not bad.

His activity harkened to at time, not too long ago, when the best and most exciting fighters in the world often fought four and five times a year. Oscar De la Hoya fought four significant fights in 1995 – scoring a decision over Juan “John-John” Molina and stoppages of Rafael Ruelas (which unified 135-pound belts), then-unbeaten Genaro Hernandez and Jesse James Leija – which proved that he was the best lightweight in the world at the time. It’s no coincidence that The Golden Boy won THE RING’s Fighter of the Year in ’95.

De La Hoya wasn’t alone. Floyd Mayweather, who hasn’t fought more than once a year since 2007, fought seven times in ’98 as he quickly evolved from a hot prospect to the best junior lightweight on the planet. He won THE RING’s Fighter of the Year award in ’98. Shane Mosley defended his lightweight title five times (all by stoppage) that same year, earning Fighter of the Year honors from the Boxing Writers Association of America.

Hopefully, Donaire will maintain his busy schedule in 2013 and encourage other elite fighters to showcase their talent more than once or twice a year.

Speaking setting of much-needed trends in boxing, the new-school statement Donaire made in 2012 was committing to Olympic-style drug testing, which means random testing of banned substances at any time of any day, year-round.

Donaire, who raised eye brows when he hired controversial nutritional guru Victor Conte a few years ago, announced in June that he would undergo random testing conducted by the Voluntary Anti-Doping Association (VADA).

Donaire, who doesn’t require that his opponents undergo the same testing and makes the results of his drug tests public, was commended by fans and media alike in 2012, the year that performance-enhancing drug use became a hot-button issue in the sport after Lamont Peterson, Andre Berto, Antonio Tarver and Erik Morales were each found to have banned substances in their bodies either prior to or after major fights.

So far, Donaire is the only high-profile professional boxer who is willing to commit to comprehensive year-round drug testing. Hopefully, other standouts will follow his lead in 2013 as young boxers realize that training fairly and without PEDs can one day lead to success and even Fighter of the Year honors.