Lem’s latest: Berto recovering; Canelo to be ringside for Cotto-Trout 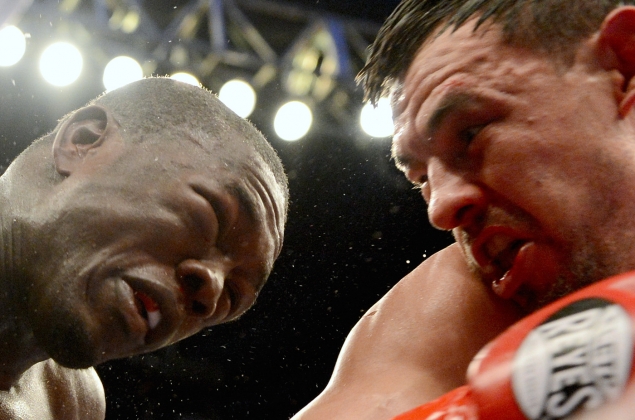 Former two-time welterweight titleholder Andre Berto is resting with family at his home in Winter Haven, Fla., after having been treated and released at a local hospital following Saturday night’s HBO-televised unanimous decision loss to interim WBC beltholder Robert Guerrero at the Citizens Business Bank Arena in Ontario, Calif., according to his publicist, his trainer, and his promoter.

“I actually talked to Andre yesterday, and after the fight, he had a checkup at the hospital, and everything was okay,” said Golden Boy CEO Richard Schaefer.

“He was released, and he flew on Sunday back home to Florida. I had a good conversation with him. He is resting and he is fine. My hat goes off to Andre Berto, who, most importantly, is doing fine.”

“He went directly from the arena to Loma Linda University Medical Center about 20 minutes away from the arena,” stated Berto’s publicist, Julie Goldsticker, in an e-mail to RingTV.com.

“He was at the hospital for about two hours and was released and cleared to fly the next day. He was on an 8:30 a.m. flight back to Florida with his family on Sunday, and is now home with them, resting and recovering. He is thankful for everyone’s support and well wishes.”

“He just went to the hospital because I wanted him to, ” said  Morgan, who answered, “nothing at all,” in response to whether or not there were any internal issues as a result of the fierce body attack inflicted by Guerrero.

“He said that he didn’t feel any body punches. There was a CAT Scan. There were just contusions. Bruises to the eyes. I just wanted to make sure everything was good. They checked everything because I wanted to know. Nobody recommended it or anything, but it was all good, good, good.”

Despite the fact that his left eye closed early in the fight, and his right did the same later on, Berto continued to throw and land hard punches, his effective uppercuts causing similar damage to the right eye of Guerrero.

“In the second round, Guerrero caught Andre and Guerrero was using roughhouse tactics throughout the fight. No love lost, but the guy fought a good fight,” said Morgan.

Guerrero earned his 15th straight win during a run that includes nine stoppages against Berto (28-2, 22 KOs), who was ending a 15-month ring absence.

Guerrero, 29, was in only his second fight as a welterweight, having debuted with July’s unanimous decision over previously unbeaten Selcuk Aydin (23-1, 17 KOs) for the WBC’s interim belt, a triumph that ended his own 15-month ring absence.

Berto, 29, was coming off last September’s fifth-round knockout that took the IBF welterweight belt from Jan Zaveck, then tested positive for a banned substance which forced the cancelation of a rematch against Victor Ortiz that was scheduled for June.

Berto was licensed for a year by the California State Athletic Commission in July after testing negative for “anabolic steroids and masking agents,” then contractually agreed with Guerrero to undergo mandatory drug testing by the United States Anti-Doping Agency.

Although dethroned as WBC titleholder by Ortiz in April of last year during a fight that featured two knockdowns by each boxer, Berto rebounded with the stoppage of Zaveck for the IBF’s belt, later relinquishing the crown for the rematch with Ortiz.

“I think that all of the pressure go to Berto from what he had gone through over the last year or so, because, that guy, to me, is nowhere near Berto’s level,” said Morgan, referring to Guerrero.

“But you couldn’t tell nobody that that night. We just have to get up, brush ourselves off and move on. There’s nothing else that we can do.”

SCHAEFER: ‘BERTO HAS A LOT TO BE PROUD OF’ 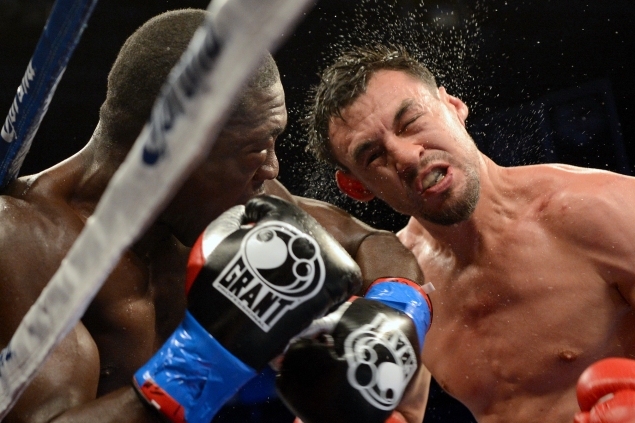 Schaefer still believes, nevertheless, that Berto derseves a title shot in a 147-pound division whose beltholders include undefeated Tim Bradley of the WBO, once-beaten southpaw Devon Alexander of the IBF and Paulie Malignaggi of the WBA.

“Even though, at the beginning of the fight, he got caught there and obviously had a difficult time pretty much from the second round on, seeing from his eyes, I think that Andre Berto has a lot to be proud of. He will be back, and he will be back, bigger, better and stronger. I am convinced that he will be fighting for a world title again in 2013,” said Schaefer.

“It says a lot about a fighter who last year in 2011 [against Ortiz,] and now, in 2012, was part of a Fight of the Year. It shows you the kind of fighter that Andre is, and that he knows how to entertain the people. There is no quit in him, even though he obviously had dramatically impaired vision. He just kept going and that’s a true warrior and a true modern day gladiator.”

MORGAN LASHES OUT AT HECKLER

Having blamed the positive test result on a contaminated substance, Berto was granted a one-year license by CSAC to fight in California.

But that didn’t stop at least one heckler from attacking the fighter as he entered the venue to face Guerrero, according to Morgan, who called the move one of “ignorance.”

“Walking in, some dude was screaming, ‘stay off the ‘roids, Berto, stay off ‘roids.’ That’s just the complete ignorance that people don’t know…It had to be a contamination, which has been proven. But you always have the guy who sits off to the side and thinks what he wants to think and believe what he wants to believe,” said Morgan.

“Berto’s been tested by USADA and the World Anti-Doping Agency since he was 17. Never found nothing. We were the ones that wanted VADA, which is the most complete testing there is. Why would we be cheaters when we’re the first ones to do it. That makes no sense.” 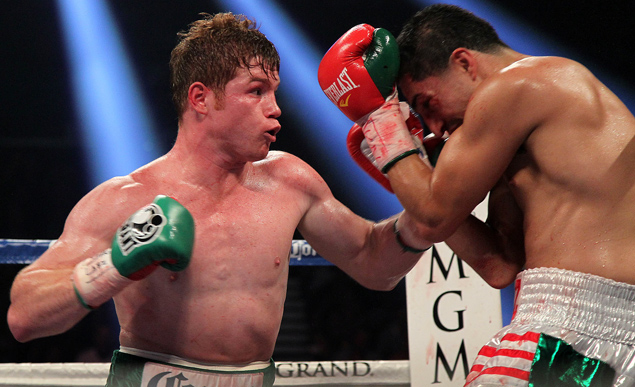 Trout owns a unanimous decision victory over Rigoburto Alvarez in February of last year for his current belt before Alvarez’s partisan fans at the Arena Colseo in Guadalajara, Mexico.

Rigoburto is the older of Saul “Canelo” Alvarez, 22, who is coming off last month’s Showtime-televised, fifth-round knockout of Josesito Lopez.

RING middleweight champion Martinez (50-2-2, 28 KOs) will “pursue a rematch” on Sept. 14 with Julio Cesar Chavez Jr. (46-1-1, 32 KOs) likley in the fall after first facing an opponent to be determined in an HBO-televised bout from his native Argentina on April 27, according to Martinez’s advisor, Sampson Lewkowicz.

Martinez underwent “successful” surgery “with no complications” in Madrid, Spain, earlier this month to repair torn ligaments in his right knee suffered during September’s unanimous decision that dethroned Chavez as WBC titleholder.

Junior lightweight Logan Cotton McGuinness (18-0-1, 9 KOs), of Ontario, Canada, will try to end the three-fight knockout streak of hard-hitting Carlos Manuel Reyes (23-1-1, 15 KOs), of the Dominican Republic in a 10-rounder on Dec. 14 at Montr├®al’s Bell Centre.

Also on the card, to be broadcast on WealthTV in the United States, is former light heavyweight titleholder Jean Pascal (26-2-1, 16 KOs) returning to the ring opposite Aleksy Kuziemsky (23-4, 7 KOs).

“Bell Centre usually gets 10,000 people,” said McGuinness, 25, who will be making his sixth appearance at the venue. “This is a stacked card. Each one of us could be the headliner of our own cards, so I’m very excited to be on it.”