Weekend Review: Guerrero continues to do what he does — win 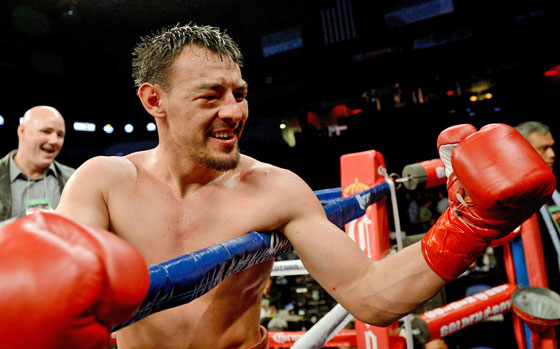 Robert Guerrero: Guerrero doesn’t do any one thing particularly well. He’s a good athlete but not a special one. He boxes well but will never be confused with Floyd Mayweather Jr., a man he hopes to meet in his next fight. He has solid punching power but generally won’t take you out with one shot, particularly as he rises in weight. The only thing Guerrero does better than most elite boxers is beat formidable opponents, as he did again when he outpointed naturally bigger Andre Berto with a lethal combination of solid ability and admirable grit Saturday night in Ontario, Calif., the biggest victory of his 11-year career. Guerrero (31-1-1, 18 knockouts) has now gone seven years and 18 fights without losing, including no-contests against Orlando Salido and Daud Yordan. He probably wouldn’t beat Mayweather, whose skills remain unrivaled, but it’s hard to argue that he hasn’t earned the opportunity. And you couldn’t completely dismiss the chances of someone as fiercely determined as “The Ghost.”

Andre Berto: Berto (28-2, 22 KOs) has had a rough 19 months. It started with a unanimous-decision loss to Victor Ortiz in April of last year, which cost him his welterweight title. It continued when he failed a drug test in May, which scuttled his rematch with Ortiz and kept him out of the ring for more than a year. And it culminated with a one-sided setback against Guerrero even though he fought with uncommon courage given that his eyes were swollen shut, a profoundly disappointing return to the ring. I don’t think anyone knows where Berto goes from here. The good news is that he’s only 29 and obviously can still fight, as proved against both Ortiz and Guerrero. I suspect he’ll bounce back with a victory over a less-demanding opponent and position himself once again for a high-profile fight. And given his talent, don’t be surprised if he ends up the other side of a decision or even scores a knockout the next time he’s in the ring with an elite foe.

Keith Thurman: The fact Thurman stopped Carlos Quintana in only four rounds on the Guerrero-Berto undercard is no surprise. The 24-year-old Floridian is 19-0, with 18 knockouts. He started his career with eight first-round stoppages and has been past six rounds only once. No one can match his resume when it comes to truncated fights. However, the manner in which he dispatched Quintana was particularly awesome. Thurman, once an accomplished amateur, is no wild brawler who relies solely on brawn to win fights. He fights with a controlled, calculated aggression built on solid skills, immense power and a chilling killer instinct. Quintana (29-4, 23 KOs) is no longer what he was, a realization that prompted him to announce his retirement after the fight. Still, one might’ve expected the wily veteran to provide some resistance because of his boxing ability and experience. Instead, Thurman coldly and methodically cut off the ring and took him apart. I, for one, was impressed.

Ricky Hatton: Almost every elite fighter goes through it, that inevitable moment in the ring when it becomes painfully clear that he no longer has what made him a champion. Hatton’s turn came Saturday in Manchester, England, his hometown. The former two-division titleholder, returning to the ring after a 3¾-year absence and many years of abusing his body, battled Vyacheslav Senchenko valiantly but ultimately couldn’t survive the rigors of the most-demanding sport. Reality began to sink in moments after he was stopped by a single body shot, as he was being interviewed. Hatton (45-3, 32 KOs) fought back tears as he tried to explain what went wrong, obviously sensing the end of his remarkable career was at hand. I’ll never forget hearing the fans singing “There’s only one Ricky Hatton ÔÇª” after the knockout, an emotional moment that underscored his supporters’ love for their hero. He should be proud that he was able to touch so many people with his fighting spirit.

Hector Camacho: I think Camacho’s ability tends to be obscured by his flamboyant personality when he was in the spotlight and out-of-the-ring problems. However, those who fought him in his peak years, the 1980s and early ’90s, know. He was a brilliant boxer with ridiculously fast hands and feet who made many of his opponents – even good ones – look foolish. And he probably could’ve accomplished more if it weren’t for his own self-destructive ways. Said Freddie Roach, who lost a one-sided decision to Camacho in 1985: “If Hector Camacho had stayed clean, he could have been one of the best fighters in the sport, pound-for-pound, for all time, I think.” We also must admire his natural ability to promote himself even if we believe he went over the top. Remember, he wasn’t the most-exciting in the world. He had to do something besides win to set himself apart. And he did, creating one of the great characters in the sport. Hector Camacho, who died on Nov. 24, was one of a kind. RIP champ.

The night in Manchester wasn’t all bad for UK fighters. Scott Quigg and Martin Murray recorded impressive victories on the Hatton-Senchenko card. Quigg (25-0-1, 18 KOs) stopped still-capable veteran Rendall Munroe in six rounds in a rematch of their technical draw in June, an important step in the young junior featherweight’s career. And middleweight contender Murray (25-0-1, 11 KOs) KO’d previously unbeaten prospect Jorge Navarro in six rounds. Murray now appears set to face Sergio Martinez in April in Argentina. ÔÇª One-time star Fernando Montiel (49-4-2, 37 KOs) had to work hard to defeat limited Giovanni Caro by a close, unanimous decision Saturday in Mexico. That follows a split-decision nod over youngster Arturo Reyes in June. Montiel, 33, doesn’t seem to have it any longer. ÔÇª Talented Jermell Charlo (19-0, 9 KOs) easily outpointed tough journeyman Dashon Johnson (13-9-3, 4 KOs) but it wasn’t much fun to watch. ÔÇª Adrien Broner hurt my ears when he rapped before the Guerrero-Berto fight. ÔÇª Xiong Zhao Zhong (20-4-1, 11 KOs) outpointed Javier Resendiz (13-4-2, 6 KOs) to win the vacant interim WBC strawweight title Saturday in Kunming, China, reportedly the first title (such as it is) won by a Chinese fighter. I have a feeling there are many more to come. There are 1.34 billion people in China and the sport reportedly is growing fast there.