Mess with Guerrero at your own peril 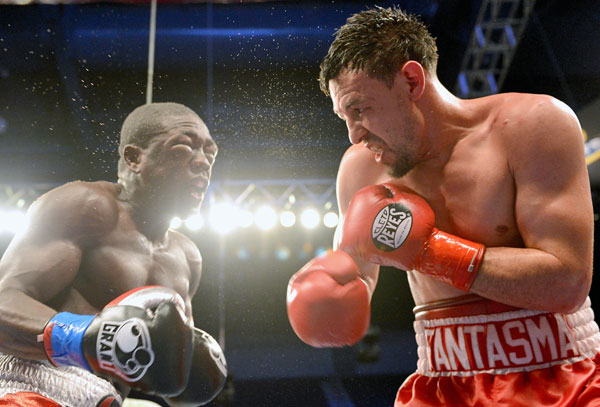 The welterweight contender came up with an excellent game plan, to neutralize Berto’s hand speed and power by smothering him from beginning to end. And he executed it well, winning 116-110 (or eight rounds to four) on all three scorecards. I also had it 116-110.

Guerrero had to pass through hell to do it, though. The inside fighting was as brutal as any I’ve seen in a long time, leaving both of Berto’s eyes and Guerrero’s right eye battered shut.

Berto went down in both the first and second rounds but survived to make it a give-and-take brawl the rest of the way, taking considerable punishment but landing dozens of his own hard, accurate punches – particularly eye-catching uppercuts — that would’ve hurt almost anyone around 147 pounds.

Not Guerrero, who proved again that he’s a rough, durable character who has the ability and determination to do whatever it takes to win. It’s as if he’s saying, “No one is tougher than I am.”

It seems he’s right. As a result, he was able to beat up one of the best fighters in the welterweight division – one who is naturally bigger and more athletic – to score the most-important victory of his 11-year career.

The victory could lead to something enormous: Guerrero (31-1-1, 18 knockouts) is now squarely in the Floyd Mayweather Jr. sweepstakes.

Of course, nothing is guaranteed. Mayweather has yet to decide who will receive by far the biggest payday of his career. Saul “Canelo” Alvarez is another viable option. However, Guerrero made a strong case for himself by beating Berto so convincingly on such a large stage, prompting Golden Boy CEO Richard Schaefer to say immediately afterward, “I can’t wait to get on the phone and try to make the fight with Mayweather.”

Guerrero can almost taste the biggest opportunity of his life.

“I want to fight the best,” he said. “I’m looking for Floyd Mayweather next, man. Pretty Boy, let’s do it. I mean, I’m here. This is my second fight at 147 pounds, unanimous decision against a great champion who is no joke. I came and showed up and did my thing.”

How would Guerrero do if his dream came true?

I wouldn’t pick anyone to beat Mayweather, who I believe remains the most-skillful fighter in the world at 35. I wouldn’t count Guerrero out, though, particularly after we saw Miguel Cotto give Mayweather problems in defeat in May.

Guerrero, 29, would try to do the same to Mayweather as he did to Berto, neutralize his speed by staying on top of him. That’s what Cotto did against Mayweather, who won a unanimous decision but faced more adversity than he had in years.

I don’t think Mayweather would allow himself to be trapped against the ropes as much as Berto was; he’s too smart and experienced. He’d spin away when things get too hairy. Plus, his defensive skills are much better than Berto’s; he wouldn’t take this kind of punishment.

And the fight undoubtedly would take place above 147 pounds. That would work against Guerrero, who was still fighting at 135 as recently as last year.

However, one thing seems fairly certain to me in spite of the above: Mayweather would know he was in a fight. Guerrero is a complete fighter, a crafty boxer who can take anything you can dish out and deliver more in return.

Perhaps most important, he seems to have unshakeable confidence in himself. He truly believes he can compete with anyone. And he’s making believers of us.