Thurman breaks Quintana down to a fourth-round TKO 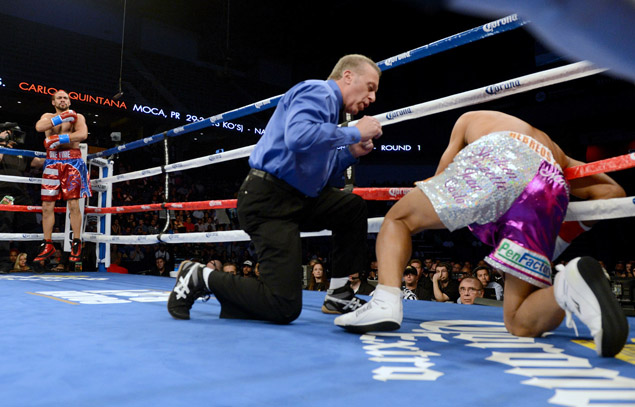 ONTARIO, Calif. – Carlos Quintana was so confident that he would beat Keith Thurman in the co-featured bout to the Andre Berto-Robert Guerrero fight on Saturday that the slick Puerto Rican veteran called out WBC 154-pound titleholder Saul “Canelo” Alvarez at the final press conference for HBO-televised doubleheader at the Citizens Business Bank Arena.

However, as Mike Tyson once said, everybody’s got a plan until they get hit.

Quintana took that hit in the first round against the undefeated power-puncher from Clearwater, Fla. – and it was a devastating hook to the body. The former welterweight titleholder got up and did his best to survive the round and the next two with holding and non-stop lateral movement, but Thurman – who prides himself on scoring knockouts – wasn’t taking any prisoners.

Thurman stepped up his pressure in the fourth, cornered Quintana and pummeled the 36-year-old southpaw with a series of head-jarring hooks and crosses that eventually forced referee Jack Reiss to wave the fight off at 2:19 of the round.

Thurman (19-0, 18 knockouts) out-landed Quintana 22-3 in the fourth round, according to CompuBox punchstats. All 22 punches were power shots.

It was an impressive performance for the welterweight prospect, who displayed more than his vaunted KO power by not allowing Quintana’s survival tactics in rounds two and three to frustrate him. 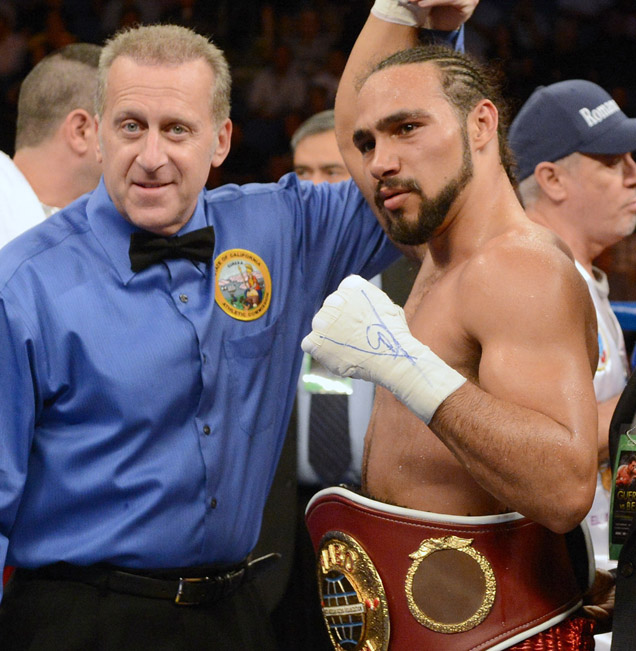 “I was confident in myself and I know my skills,” Thurman said after the fight. “He was slippery like a snake. He got me with one good shot and he tied me up, but I kept my composure. I caught him early with the body shot and I was breaking him down.”

Thurman gave himself a B+ grade for his effort and the result of his first step-up bout. Now he says he wants to face the best fighters of the welterweight and junior middleweight divisions.

“I’m calling out the world of boxing,” he said. “Everyone can get it.”

Quintana, who announced his retirement after the fight, is now a Thurman believer.

“He’s a very strong fighter,” he said. “I never recuperated from the first knockdown. He’s got a great future ahead of him. But for me, this is it.”

Junior middleweight prospect Jermell Charlo outpointed pesky Dashon Johnson over 10 mostly uneventful rounds. Charlo (19-0, 9 KOs), who won by scores of 100-89, 99-90, and 98-91, controlled the bout with his lateral movement, jab and one-two combinations but didn’t do enough to satisfy the crowd, which booed during the lulls in action.

The one moment of excitement came in the seventh round when Johnson (13-9-3, 4 KOs) body slammed Charlo in frustration. Referee David Denken docked Johnson a point for the foul and Charlo attacked the well-schooled journeyman until the bell, but the Houston, Texas-based prospect did not keep the heat on his cagey opponent.

Many ringside media and fans believed Charlo could have scored a knockout if he pressed the issue a little more and went to the body.

Dominic Breazeale, the heavyweight representative on the 2012 U.S. Olympic team, dropped gutsy Mike Bissett four times before stopping the Nashville journeyman in the second round of a scheduled four rounder. Breazeale (2-0, 2 KOs), a former college football standout from Alhambra, Calif., scored two knockdowns in each of the first and second rounds.

Manuel Robles Jr. made his pro debut a successful one with a first-round stoppage of Misael Martinez (0-7) of a scheduled four-round featherweight bout that kicked off the Golden Boy Promotions card.