Fighter retires, saying ‘It is the end of Ricky Hatton’ 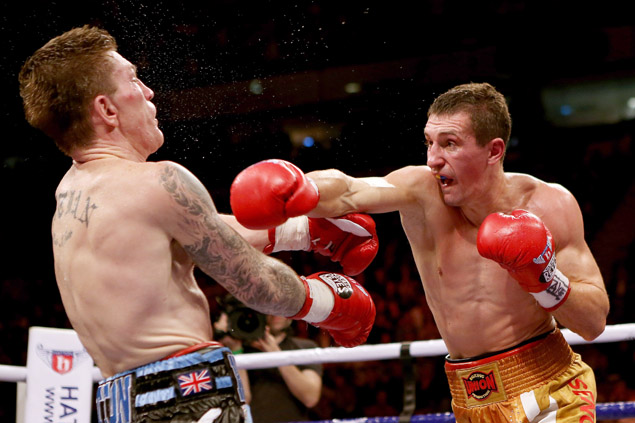 In victory, Senchenko rebounded from April’s ninth-round knockout to Malignaggi that dethroned him as WBA 147-pound beltholder.

“I needed one more fight to see if I had still got it, and I haven’t,” said Hatton, who led, 77-76, on the cards of judges Oliver Brien and John Keane, and, 78-74, on that of the third judge, Robin Dolpiere, at the time of the knockout.

“A fighter knows, and I know it isn’t there anymore. It’s too many hard fights, I’ve burned the candle at both ends. I’ve put my body through the mire, in and out of the ring. But it doesn’t matter how hard I train. I couldn’t have done any better.”

Hatton retired following his last fight against Pacquiao, subsequently endured an ongoing battle to overcome depression, drug addiction and suicidal thoughts while out of the ring.

“I’m a happy man tonight. I don’t feel like putting a knife to my wrists. I have got the answers I needed,” said Hatton. “I got the opportunity, and I got the answers, and no matter how upsetting it is, I have got to be a man and say, ‘It is the end of Ricky Hatton.'”