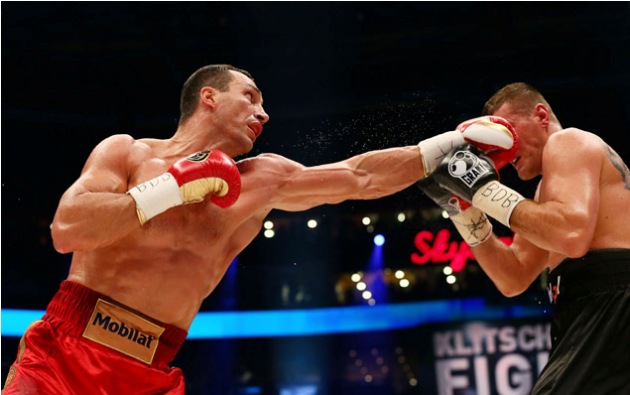 “I knew that it was going to be a tough fight against him,” Klitschko said of Wach, owner of a fourth-round knockout in July of last year over Kevin McBride, whose sixth-round stoppage in June of 2005 retired Mike Tyson.

“I didn’t know that a man could take so much punishment. I think that by the seventh round, he was out of breath. I think that he was punched out. But he kept going. He was standing up, and his legs wouldn’t let him go down.”

Klitschko was without Hall of Fame trainer Emanuel “Manny” Steward, who died on Oct. 25 at the age of 68. Before his death, Steward instructed Klitschko to replace him with chief sparring partner Johnathon Banks in preparation for Wach.

“I still heard Emanuel’s voice during the fight…His spirit is still with us, and it’s always going to be with us. Johnathon did a good job. I always believed in him as a coach. And I always told him, ‘Johnathon, one day, you’re going to become a great coach.’ And it was the truth, what I said. And you know what? You’re not a great coach yet,” said Klitschko, putting his right hand on Banks’ left shoulder in the ring during the post-fight interview.

“You have to work, yourself, to become a great coach. But of course, you made a milestone against Mariusz Wach, and thank you very much. He gave good advice, and I was following it. So it’s not just my win, it’s your win as well, so, congratulations…We all loved Emanuel. We all loved Emanuel the person…We miss you, we love you, rest in peace Emanuel, and, one day, we’ll meet up again.”

All three of Klitschko’s defeats were by knockout — against Ross Puritty in the 11th round in December of 1998, in the the second round opposite Corrie Sanders in March of 2003, and in the fifth in April of 2004 against Lamon Brewster, his first bout under Steward and his last loss. Klitschko later stopped Brewster in the sixth round.

“There are a lot of guys out there, and, of course I’ve been going around and asking them to fight me. I haven’t gotten many responses yet,” said Klitschko, when asked whom he would next like to face.

“But Mariusz Wach said that I will fight you, and he actually ended up fighting me. Of course, there are young challengers who need to get more experience, and then, of course, they’re going to fight you.”

Banks is 8-0-1 with four knockouts in his past nine bouts, last falling by eighth-round stoppage as a 200-pounder to Tomasz Adamek in February of 2009 at Prudential Center in Newark, N.J.

Along with Mitchell, the 6-7 Olympic bronze medalist Deontay “The Bronze Bomber” Wilder (25-0, 25 KOs), of Tuscaloosa, Ala., is considered one of America’s two premiere heavyweights, as well as the top prospects for ending the dominance of Wladimir and his 41-year-old brother, WBC beltholder Vitali Klitschko, owner of a 13-fight winning streak that includes 10 knockouts.

In another EPIX-televised bout, Swedish heavyweight Robert Helenius (18-0, 11 KOs) overcame a close call in the sixth round on the way to a lackluster unanimous-decision victory over journeyman Sherman “Tank” Williams (39-12-2, 19 KOs), of Vero Beach, Fla., from the Ice Hall in Helsinki.

Although the 28-year-old Helenius won, 98-93, 99-93, and, 99-91, he had to survive a treacherous sixth round during which the 40-year-old Williams wobbled him with a head-swiveling, overhand right.

Nicknamed The “Nordic Nightmare,” the 6-foot-6 1/2 Helenius weighed 249.3 pounds compared to the career-high 264.8 for the 5-11 Williams for the fight. Helenius was coming off a split-decision victory over Dereck Chisora in December.

ROUND 1: Klitschko begins by winning the jab-fest, nailing Wach with four, solid right hands. The fifth right is strongest, coming with about a minute and 30 seconds remaining. The sixth and seventh right hands were even more powerful.

Wach is pushing the jab, but Klitschko backs off and gives ground late. Near round’s end, however, Klitschko corners Wach, who is saved from further punishment by the bell. Klitschko, 10-9.

ROUND 2: Between rounds, corner man Banks instructs Klitschko to punch more to the body, even as he out-punched Wach, 19-3, in the first. Klitschko’s jab picks up where it left off, as does the right that rocks Wach. Wach misses with his own right, and they clinch.

Klitchko has no problem finding Wach with the jab, and then, nails him with a left hook. Wach gets physical, pushing down on Klitschko’s head. Referee Eddie Cotton stops action to replace Wach’s mouthpiece. Clinching by Klitschko. Klitschko, 10-9; Klitschko, 20-18. 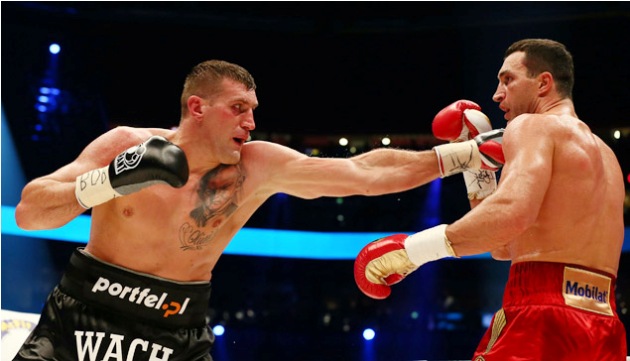 ROUND 3: Klitschko has out-landed Wach, 26-5, in jabs over the first two rounds. Wach’s face is showing the wear. Hard right by Klitschko, followed by four jabs. Another hard right. Wach’s mouth is agape, although, he’s gamely moving forward.

ROUND 4: Klitschko has out-landed Wach, 58-15, after three rounds. Wach has a decent chin, having eaten plenty of left hooks, jabs and rights. Nice left hook by Klitshcko, and a clinch.

Klitschko paws with the jab and clinches after throwing his right hand. Four straight uppercuts to the body by Wach, who takes a hard right to the broad side of his jaw. Klitschko, 10-9; Klitscko, 40-36.

ROUND 5: Banks tells Klitschko to continue to confuse Wach with the jab. Big right by Klitschko, lots of swelling under Wach’s eyes. Wach has his hands held high, trying to crowd Klitschko, who pierces his guard with a couple of right hand leads.

ROUND 6: Klitschko returns to jabbing, throwing his right, and grabbing. Two nice jabs by Wach, who won’t be discouraged. Hard right by Klitschko wobbles Wach, who, nevertheless, stays on his feet. Wach’s corner tells him Klitschko has hit him with everything, “but you’re still here.” Klitschko, 10-9; Klitschko, 60-54.

ROUND 7: Klitschko out-jabbed Wach, 16-2, in the sixth. Another hard right by Klitschko, whose jab continues to snap Wach’s head. A left, hard right, and four more jabs by Klitschko.

ROUND 8: Wach has been out-jabbed, 98-18, entering the eighth, and is being pummeled along the ropes. Hard rights, uppercuts, drive Wach into the ropes. Wach has his hands held high.

But Klitschko continues to drive home the right hand. Amazingly, Wach withstands the onslaught from Klitschko, who appears to have punched himself out. Klitschko, 10-8; Klitschko, 80-71.

ROUND 9: Klitschko out-landed Wach, 44-3, in the eighth round. Wach gamely comes forward, but continues to eat the jab, followed by the right hand. Another right pierces Wach’s guard, as does another.

A left rocks back Wach’s head. Still, Wach plods forward, eating jabs and follow-up right hands. Wach misses a long jab and a right, then takes another overhand right hand. Klitschko lands a right prior to the bell. Klitschko, 10-9; Klitschko, 90-80

ROUND 10: Klitshko’s on his toes, demonstrating his superior conditioning and ability to be elusive. Wach paws with the jab, then takes a counter-right and continues to be out-jabbed.

Klitschko clinches, potentially fatigued, even as he wins, yet another round that is relatively uneventful. Klitchko out-lands Wach, 21-5, in the round. Klitschko, 10-9; Klitschko, 100-89.

ROUND 11: Klitchko lands a hard right behind the jab that sends Wach to the ropes for more punishment. Wach, nevertheless, finds the determination to move forward.

Klitschko gives ground, but still lands long right hands. Klitschko gets clipped by a right, and is cut slightly under the left eye from an apparent clash of heads. Solid left hand by Klitschko, who clinches. Klitschko, 10-9, Klitschko, 110-98. 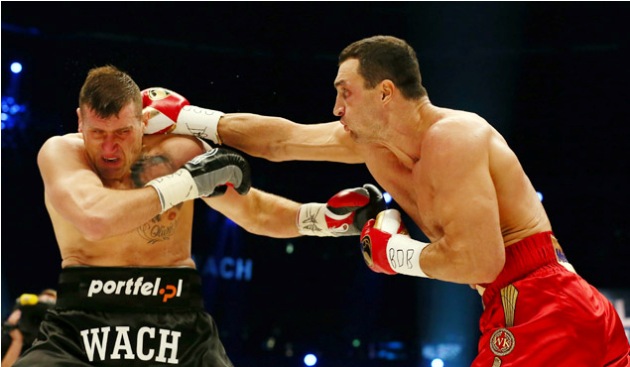 ROUND 12: Wach moves forward, Klitschko retreats, all the while, doing damage. A hard left hook drives Wach to the ropes, where he takes two hard rights.

Wach gets off the ropes, takes a right, and then, slams Klitschko to the canvas. It’s a slip. Two more left hooks from Klitschko, who stays on his toes, jabs and boxes his way to victory. Klitschko 10-9, Klitschko, 120-107.