LOS ANGELES – The last time Abner Mares fought at Staples Center – against then-IBF bantamweight beltholder Yonnhy Perez in May of 2010 – the 2004 Mexican Olympian came up empty handed when their heated 12-round battle ended in a majority decision.

The 26-year-old Southern Californian won’t enter the arena empty handed when he faces Anselmo Moreno on Saturday. Mares (24-0-1, 13 knockouts) brings the WBC 122-pound title to the Showtime-televised main event, but more than a few hardcore fans and boxing insiders believe he won’t leave the arena with that belt. 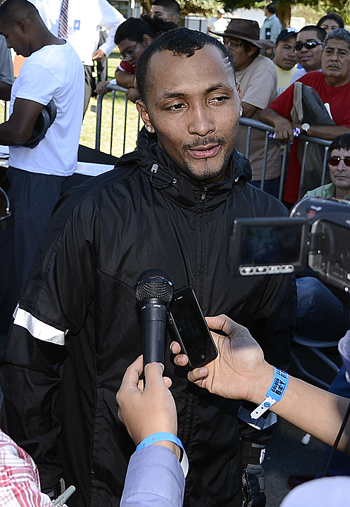 That’s because Moreno (33-1-1, 12 KOs), THE RING’s No. 1-rated bantamweight and No. 10-rated pound-for-pound boxer , is a technician on the level of Floyd Mayweather Jr. and Andre Ward. The 27-year-old southpaw isn’t as well-known or celebrated as Mayweather and Ward, but he’s just effective in the ring and apart from a 4-round split decision loss 10 years ago, he’s as much a winner as the two Americans.

Moreno has made 10 defenses of the WBA bantamweight title he won from Wladimir Sidorenko in 2008. Former titleholders Mahyar Monshipour, Lorenzo Para and Vic Darchinyan, as well as then-undefeated contender Nehomar Cermeno, are among the challengers the Panamanian has defeated during his title run.

Mares is well aware of Moreno’s impressive track record. He maintains that he’s stronger, fresher and more versatile than the veterans Moreno has faced. He’s also confident that the fighter he’s become over the past two years is experienced enough to defend his 122-pound title.

“Everything has changed since my first world title fight,” Mares told RingTV.com after a public workout at MacArthur Park on Monday. “I’ve grown so much as a young man and an athlete, and I’m ready to show Anselmo Moreno how much I’ve improved.”

After the draw with Perez, Mares outpointed Darchinyan, reigning IBF titleholder Joseph Agbeko in back-to-back bouts, and Eric Morel. He believes that the 60 rounds he fought in those five bouts have prepared him for Moreno.

Mares’ doubters point out that the veterans he faced were all aggressive fighters. Moreno is a finesse boxer.

Mares agrees with the observation; but not completely.

“He’s a boxer but he likes to fight, too,” Mares said. “I have to bring the fighter out in him. If I stay outside he’ll box the heck out of me. So I have to be me and make it my fight. My fight can be boxing or pressure. I can do whatever it takes. 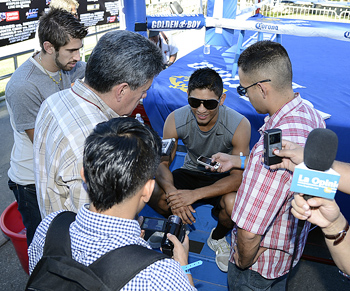 “You never know, he could come out and be the fighter and I could be the one boxing. Whatever happens, I know it’s going to be a tough fight and fans can expect a good show.

“All I have to do is remain patient. I know he’s elusive so I can’t get frustrated. I have to hit him where I can and keep in mind that I have 12 rounds.”

Moreno says he’ll be ready to box and fight hard for all 12 rounds on Saturday.

“Abner comes to fight, he doesn’t clown around; I know he’s going to fight like a man who doesn’t want to lose his title.” said Moreno, who is taller and rangier than Mares. “My style is to hit and be elusive but I also give a good fight.

“Preparation is my key to victory. I’ve worked the hardest I’ve ever worked in my career for this fight. It was an intense camp and I feel intense. I’m hungry for my second world title.”