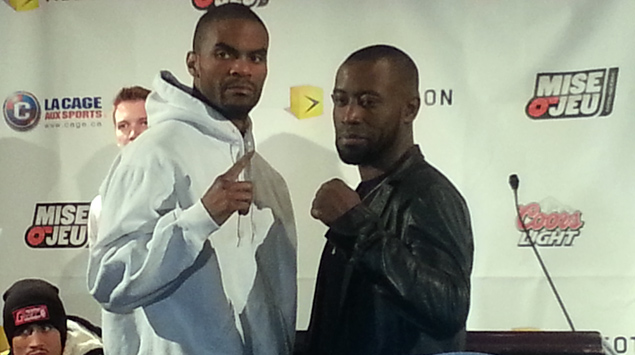 As he sits in a booth following the final undercard press conference for the Lucian Bute-Denis Grachev clash, it’s clear that Allan Green is happiest and most comfortable talking about comic books.

Long one of boxing’s best quotes, Green will spin you a web on any topic, look you dead in the eye and make you believe it. Ask about superheroes though, and his eyes seem to light up.

Today, he is particularly passionate about a pair of recent films based on comics.

“I thought the Dark Knight Rises was much better than The Avengers,” preaches Green. “It was a real movie. The Avengers and Marvel, they like to put a lot of special effects and make it shiny and slick to make up for a good movie. Just because you put special effects in it doesn’t make it a good movie. I’m looking at plot, story structure, twists. It’s pretty much cut and dry, you know he comes down to Earth, starts destroying everything and then gets defeated, but you couldn’t figure out the Dark Knight Rises.”

The 33-year-old veteran’s career has been equally as difficult to figure out as Bruce Wayne’s fate in this summer’s smash box office hit.

While he finds solace in talk of battling villains, inside the ring he has never seemed to find comfort. Green has had premium cable dates or significant title shots at middleweight, super middleweight, and most recently a catchweight of 172 pounds.

On Saturday, when he faces Renan St. Juste in Montreal, Quebec, he feels he’ll finally have reached his physical peak.

Green (31-4, 21 knockouts) has always had his share of critics, most of whom seem spurned on by the immense promise the Tulsa, Okla., native has shown but never lived up to. The tale of being ‘dead’ at a given weight is one they’ve heard time and time again throughout his career, forcing one to question how it took 15 pounds of experimentation to find the solution.

Whether the critics are even there or not anymore is another question. After a chilling knockout loss to Mikkel Kessler in May of this year, most folks who were following “The Ghost Dog” decided they’d seen and heard enough.

As Green might put it, he hasn’t been impressed by the writing of Thor recently, but it has enough promise to deserve another look.

“You feel better. For a person who’s never really been in there, they think you’re making excuses. It’s not an excuse. It’s a fact. You’re just giving a reason – ‘man, I don’t feel my best at this weight.’ You’re just telling the truth,” said Green, who also started his career as a light heavyweight in 2002.

As has been the story for him as a professional, he was seconds away from not being in a “last chance” scenario against St. Juste this weekend.

In the first round against Kessler, Green scored with a hard right cross, left hook combo that floored the hometown hero. The Dane was on wobbly legs, but managed to make it out of the round and wrangle control of the bout.

“I knew I could beat him. I should have went with my first mind in the first round to get the fight over with, but I didn’t, and I paid for it. I didn’t have the energy to go six, seven rounds, I knew I didn’t have the strength, so I should have got the fight over with like I was wanting to do. But your trainer’s telling you take your time, take your time. It’s kind of conflicting,” said Green.

Short of an incredible injustice, there won’t be any excuses if he were to lose to St. Juste (23-3-1, 15 KOs). While he is fighting on the road, he will be the bigger, more experienced and more talented fighter standing in the ring at Le Centre Bell.

Thus far, the “Ghost Dog” plot has been relatively predictable. He wins these types of fights, but loses the big ones. The sequels have all ended the same way, but always with the glimmer of hope that he’ll return again in a slightly new form.

As with any tale though, the story has to arc somewhere.