Guerrero says he’s ready for the best after Candelo fight

Fernando Guerrero doesn’t watch fights that occur in his weight class. It’s not that he doesn’t have his sights set on the top players in the middleweight division, but rather the frustration that comes along with watching others bask in a spotlight that he believes he should be under.

“I really don’t want to see them because it makes me feel like, ‘Oh what the heck, that should’ve been me,'” said Guerrero (24-1, 18 knockouts), who headlines a Fox Sports Net/Fox Deportes-televised card (10 p.m. ET/7 p.m. PT) on Saturday. “So I only watch them when I fight them. It depresses me watching anybody in the ring when it should be me.” 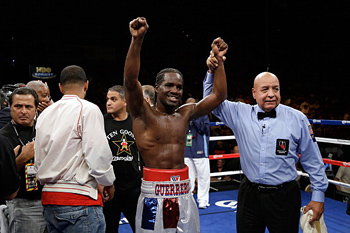 The 26-year-old southpaw, who faces Colombian veteran J.C. Candelo in the ten-round main event of the Golden Boy Promotions show at the Humble Civic Center in Humble, Texas, has his reasons for feeling that way. After a standout amateur career that fell just short of earning him a berth on the 2008 U.S. Olympic squad, Guerrero won the first 21 fights of his career and was featured numerous times on ESPN2’s Friday Night Fights and Showtime’s ShoBox, often performing in front of a sizable local contingent in his hometown of Salisbury, Md.

The lone fight that Guerrero lost – a fourth-round TKO against Grady Brewer last June – convinced him that he had to make changes if his career was to reach the heights he believes are possible. For that fight, Guerrero weighed a career-low 152¾, despite having competed in the 165-pound division as an amateur and spending most of his pro career as a middleweight.

“When I went down in weight, I really didn’t want to,” admits Guerrero. “People are funny and they’ll critique everything, ‘Oh Fernando is not a big middleweight, he’s not even a big welterweight so he’s gotta go down to 147.’ If you listen to people, you’ll go crazy. Mostly all of the good middleweights are my size, look at [RING middleweight champion Sergio Martinez], he’s my size. If he can do it, why can’t I?

“As a young student, everybody’s telling you ‘Let me do it, you just worry about one thing and that is boxing.’ When they say that, then you become dependent on everybody else and you can’t even tie your own shoelaces. Boxing is a big business, they don’t even call it boxing anymore, they call it the business of boxing.”

Guerrero reorganized his team, with his most visible change coming with the addition of trainer Virgil Hunter, who was this year’s recipient of the Boxing Writers Association of America (BWAA) Trainer of the Year award. Hunter, who also trains Andre Ward and Amir Khan, is working with Guerrero for the first time in this fight, but says he got a head start by speaking with Guerrero’s former trainer Barry Hunter (no relation).

“Fortunately his last coach Barry is a good friend of mine, so I was able to get some very accurate information about Fernando in terms of his ability,” said Hunter. “With Fernando, with a tweak here and a tweak there…. I think he is very capable of capable of challenging for a middleweight title sometime next year.”

Guerrero and Hunter are working together for the first time in this fight, and so far Guerrero is pleased with the progress they’ve made.

“He’s really just letting me do my own thing right now, he’s teaching me to be relaxed, using my shoulders a little more for extra protection,” said Guerrero. “You can throw combinations and have speed and power but now he breaks it down a little more for what and where.

“I’ve been around a little bit and I have had different trainers but something never clicked. So far everything has been clicking.”

So, if Guerrero doesn’t watch fellow middleweights, what does he watch?

“You’re always gonna love the great Dragon Ball Z, you gotta turn into that super sand when you’re in that ring,” said Guerrero. “Anything with karate and Naruto. I remember when I was in the amateurs, I had to fight Mortal Kombat before I get in the ring. Everybody’s like ‘Come on, we gotta go’ and I’m like ‘Hold on, I’ve almost got him.’

“I don’t like realism. I like animation because life is hard so why watch something real when I can watch something that will make me laugh like Family Guy or Martin? Life is already serious enough.”

One thing Guerrero is trying to get serious about is his level of competition. The 38-year-old Candelo (32-11-4, 21 KOs) has given a number of top 154-pounders tough fights – including Winky Wright, Kassim Ouma and Verno Phillips – but the veteran is ten years removed from his prime and is coming off a defeat in his last outing.

“I’m kind of bored right now fighting those fights, I want to fight a champion,” said Guerrero. “I think I’m ready right now, I think I got my five years in right now and usually it takes boxers five years to get a title, I think I’m right on point right now. After this fight I’m going to open my mouth and just speak my mind.”