THE RING December issue: At a glance 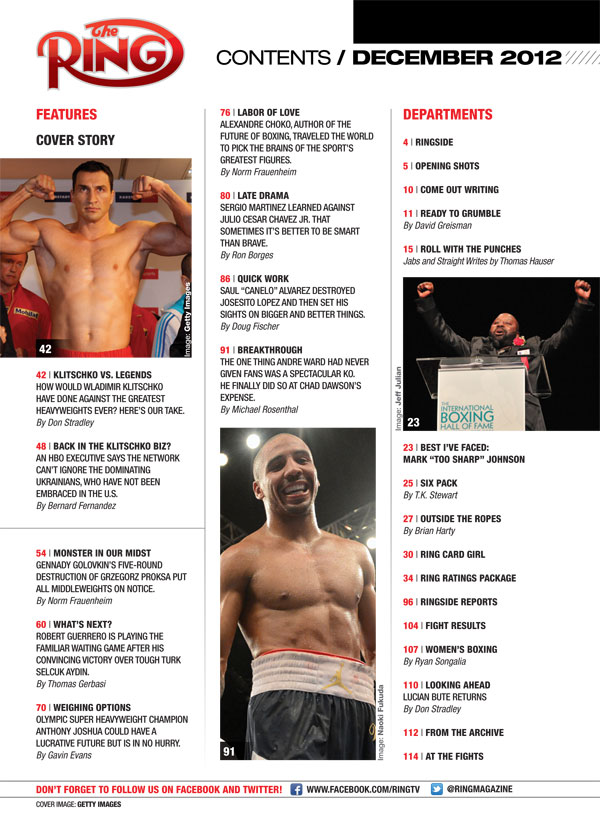 When it comes to talking boxing, nothing is more provocative than hypotheticals. And it seems nothing stirs more passion than the heavyweights.

So we decided to have a little fun in December 2012 issue of THE RING, in which we had contributor Don Stradley pit current heavyweight king Wladimir Klitschko – who has little real-life competition – against 10 of the greatest big men of all time and break down the matchups. That includes which fighter he believes would’ve won.

Does Klitschko beat Joe Louis? Could he handle Muhammad Ali’s quickness? And what about the power of George Foreman and Mike Tyson? Stradley gives you his take in the feature, which is titled KLITSCHKO VS. THE LEGENDS. 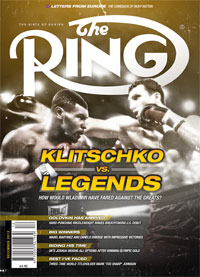 And contributor Bernard Fernandez writes in ‘WE CAN’T IGNORE THE KLITSCHKOS’ that HBO remains open to showcasing Wladimir and Vitali under the right circumstances in the U.S., which has never fully embraced them.

Also in this month’s issue, contributor Norm Frauenheim writes  in BEAST that KO specialist Gennady Golovkin, fresh off a his fifth-round demolition of Grzegorz Proksa, could take America by storm.

In ONE FOR THE BOOKS, also written by Frauenheim, is about Alexandre Choko, the author the new book The Future of Boxing. Choko traveled the world to pick the brains of the sport’s greatest figures for the compelling project.

Contributor Ron Borges, at ringside for the Sergio Martinez-Julio Cesar Chavez Jr. fight, writes in LESSON LEARNED? that Martinez was too brave for his own good.

And Michael Rosenthal, Editor of THE RING Magazine, writes in NEW HEIGHTS that Andre Ward gave the fans something new in his showdown with Chad Dawson – a spectacular knockout over an elite opponent.