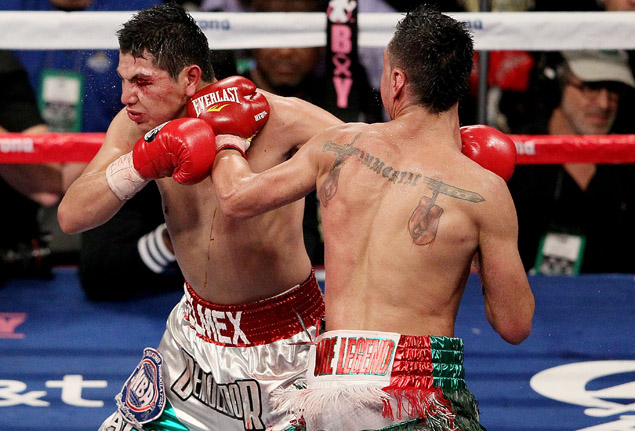 Malignaggi (32-4, 7 knockouts) is coming off a Showtime-televised split-decision victory over Mexico City’s Pablo Cesar Cano at Barclays Center in his native Brooklyn, on Oct. 20.

Malignaggi won the belt with April’s ninth-round stoppage of previously unbeaten Ukrainian Vyacheslav Senchenko, which represented Malignaggi’s fifth straight victory as a welterweight during a run that has included two knockout wins.

“They’ve announced that the guy who has the interim titles is the mandatory, but our reaction is, ‘fine, but let’s see what happens with the Hatton fight,'” said Bash of Malignaggi, who is promoted by Golden Boy.

“We know that there are other fights that could happen depending on what happens in November with Hatton. We’re aware of it, but we’re not even thinking about it until we see how other things play out.”

Malignaggi, 32, has not lost since falling by 11th-round knockout to Amir Khan as a junior welterweight at New York’s Madison Square Garden in May of 2010.

Chaves, 26, is after his sixth straight knockout win, having earned his strap with a second-round stoppage of Ismael El Massoudi and followed that up with last month’s second-round knockout of Jose Miranda.

MALIGNAGGI TO RETURN TO RINGSIDE FOR SHOWTIME

Malignaggi will return to that role over the next two months on Nov. 10, Nov. 24, and, Dec. 1, respectively.

On Nov. 10, WBC junior featherweight beltholder Abner Mares, of Montebello, Calif., and rising WBA bantamweight titleholder Anselmo Moreno, of Panama, will clash in the main event of a Showtime-televised card that will also include a defense by IBF bantamweight titleholder Leo Santa Cruz, of Lincoln Heights, Calif., against Mexico’s Victor Zaleta.

Also scheduled to be a part of the Mares-Moreno event at Staples Center in Los Angeles is a bout between Mexican junior middleweight contender Alfredo Angulo and twice-beaten Raul Casarez, of Edinburg, Texas.