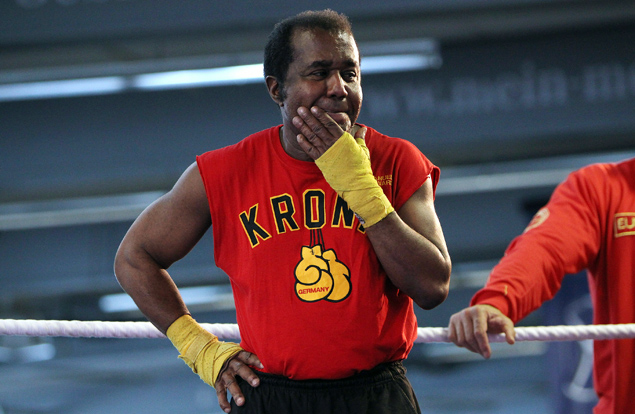 Thursday, October 25: When I arose at 8:30 a.m. the texture of this day was a joyous one because it was my mother’s birthday. But by the time I reached my gate at Pittsburgh International Airport the tenor had reversed completely.

I plugged in my laptop to read the messages that had flowed in since leaving the house three hours earlier. One sent by RingTV.com editor in chief Doug Fischer at 9:39 a.m. PT first caught my eye – and saddened my heart.

“All the buzz on Twitter is probably wrong about Emanuel Steward passing away but it’s clear he’s near the end,” the note solemnly began. “As soon as it’s confirmed (and I hope it isn’t) we need at least a short obit to run on the site before something more comprehensive is written.

“Lee, I know you’re busy, but do you think you could have something ready?” he continued.

I told him I was awaiting my flight to Boston, the first of an itinerary that included flying from Boston to Syracuse and driving my rental car 45 minutes east to Verona’s Turning Stone Casino, where I would work the CompuBox keys for HBO’s tripleheader featuring Thomas Dulorme-Luis Abregu, Miguel Vazquez-Marvin Quintero and Mauricio Herrera-Karim Mayfield. That schedule allowed precious little down time to put something together, but given the subject matter I said I would give it a go.

I consulted some biographies of Steward I assembled recently and zipped from web site to web site to confirm basic information. By the time I boarded I had made excellent progress. I wrote some more on the plane and, as is my wont, the story had grown to 800 words, far more than the mandate I was given.

After I touched down in Boston I checked my cell to ascertain Steward’s status. In a text sent shortly after I boarded, Fischer confirmed Steward’s passing and let me know that he and others were writing the breaking news items. I offered to produce a more extensive tribute piece that could be used in other forums, whether it be RingTV.com or the magazine.

Writing tribute pieces for boxing’s legends is something I’ve done for Fischer going back to our days at MaxBoxing.com. It’s a sobering duty but also a cathartic one because it allows me to channel my grief in a productive manner while also honoring the people who helped shaped my life in boxing.

As I flew from Boston to Syracuse and drove toward the Turning Stone my mind was consumed with memories of Steward and how I could properly express them. I first saw him as a fan when he was inducted into the International Boxing Hall of Fame in 1996 and back then our meeting was no more than the time required for him to sign my copy of Harry Mullan’s “The Great Book of Boxing.” I also recalled watching Steward work the mitts with a prospect named Orlando Lara inside a tent-covered ring on the grounds. Although he was supremely focused one could tell he was happy because he was in his element doing what he did best – teaching.

My first encounter with Steward as someone inside the industry took place a few years later during my CompuBox training at an HBO card. Both of us were partaking (or in my case, about to partake) in the catered pre-fight meal provided by the network. He already was seated while I was looking for a place to set down my plate, as well as the rest of me. There were a couple of open chairs at his table and I rolled the dice by asking whether I could join his group. Of course, he said yes.

Knowing we both were from West Virginia (he from Bottom Creek in the deep southern part of the state near the Virginia border, I from Friendly in the northwestern quadrant bordering the Ohio River), I used that factoid to seek out an instant rapport. Given Steward’s outgoing personality that ploy really wasn’t necessary but it did provide a commonality that carried through the rest of our professional relationship.

Up until a couple of years ago, one of my duties with CompuBox was to assemble “training camp notes” that required phone interviews with the chief seconds of fighters who were to be featured in HBO’s main events. Along with Freddie Roach, Steward was the most frequent interview subject. The effort to pin down Steward long enough to conduct a phone chat was excruciating at times because he always was being pulled in so many directions. But once we finally connected an interview that customarily lasted 15-20 minutes ended up going an hour – and sometimes more. That’s because Steward took the time to provide exquisitely expansive answers to every question and often amplified his points with stories from the distant past.  It was those stories that added color to the tribute article that I ended up writing upon his passing, which can be read here.

In fact, Steward indirectly helped me during my own two-round fight five years ago against fellow punch counter Dale Stewart, a fight arranged by ESPN’s Joe Tessitore as part of a three-fight “crew fight night” at a gym in Glastonbury, Conn. As I was being blasted with punches from all directions, I thought of Steward’s speech to Dennis Andries before the final round of his bout with Bobby Czyz flashed through my mind and helped me to press on in the face of adversity. For those who didn’t read the link, Steward told Andries that he was making a live-action movie for his son and that he had the power – at that very moment – to write the ending. Andries went on to win a majority decision and three fights later he began the second of what would become three WBC light heavyweight title tenures.

Steward ended up getting a “two-fer” with that speech, for nearly two decades after first uttering them they helped me to stay on my feet and fight back with all my might. It wasn’t enough – I lost a majority decision that should have been unanimous – but I did myself proud and several pro fighters in the audience congratulated me on my courage. I didn’t win, but the memory of Steward’s speech motivated me to give it my best.

Although I interviewed him more than a dozen times and spoke with him at several HBO-televised cards, I always addressed him as “Mr. Steward.” I never could bring myself to call him “Emanuel” because I felt I either was bringing myself up to his level or, worse yet, bringing him down to mine. In terms of hands-on boxing knowledge and experience, he occupied another universe and that was my way of honoring that. I knew the history of the sport, but he was part of it.

I pulled into the Turning Stone’s parking garage around 10:15 p.m. and checked into my room shortly thereafter. I fiddled with my article for a little while but it soon became obvious I wasn’t ready to invest the proper time and energy to make it the best it could be. I ventured down to one of the food courts to get a late-night snack and after consuming it in my room I decided the best course was to let my thoughts percolate over a good night’s sleep.

Friday, Oct. 26: I arose at 8:30 a.m. and after finishing the usual morning rituals I spent the next four-and-a-half hours immersing myself in the memories of Emanuel Steward. Once the foundation was erected I read and re-read the piece, all the while applying touches to the text while excising other portions like a painter would with a possible masterpiece.

A tribute piece is one of the most delicate and difficult to write because for those who read it death’s sting is still at its strongest.  The goal is to encapsulate the subject’s accomplishments factually while also explaining his essence compassionately. As always, it’s solely up to the readers to determine whether those goals were achieved.

Once I reached a satisfactory point I e-mailed the story to my bosses at RingTV.com as well as to CompuBox president Bob Canobbio, who knew Steward longer and deeper than I did. A few minutes later, Canobbio boosted my confidence by e-mailing a two-word review – “awesome piece.”

Although my work was done I continued to think about the icon that had just left our midst. That spell of reflection was broken shortly after 2 p.m. by the only thing that could have done it – a call to duty. Another one of my CompuBox-related tasks was to assemble profiles of the judges working the televised cards so when those names were e-mailed to me I went about the business of doing my job.

I was supposed to report to the Turning Stone’s Event Center at 4 p.m. but, being the antsy person I am when it comes to required reporting times, I showed up at 3. I passed the time by talking to a TV truck person who regaled me with stories about his decades on the job, as well as the blow-by-blow surrounding the infamous “Captain Midnight Incident” (if you don’t know about it look it up – it’s a real hoot). I then walked to the production truck to secure credentials for punch-counting partner Andy Kasprzak and myself as well as bout sheets.

The technical set-up procedures went like clockwork and, with my work done, I ventured across the hall to the weigh-in, which was about to wrap up. I chatted briefly with HBO’s “Unofficial Official” Harold Lederman as well as International Boxing Hall of Fame curators Ed and Jeff Brophy and ring announcer Marc Lichtenfeld. Every conversation broached the same subject – memories of Emanuel Steward. That wasn’t surprising given the reach he achieved in his six decades in the sport, nor were the positive impressions he left.

Realizing I hadn’t eaten anything in nearly 18 hours, I walked over to the same food court I frequented the previous night and ordered a sandwich that reached Dagwood proportions with a side of chips and a 20-ounce bottle of Diet Coke (a.k.a. “The Dinner of Champions”). I took my bounty back to my room but a slew of phone calls prevented me from eating it all at once. It wasn’t a big deal because the sandwich was not a heated one. It did however, hit the spot.

After finishing my meal I dragged out the laptop and proceeded to check my e-mails. That was how I found out my tribute to Steward had been posted and it was gratifying to read the complimentary messages because only then did I know that I had done Steward’s memory proud. That assurance helped with the winding-down process, which culminated shortly after 1 a.m.

Lee Groves is a boxing writer and historian based in Friendly, W.Va. He is a full member of the BWAA, from which he has won seven writing awards, including four in the last two years. He has been an elector for the International Boxing Hall of Fame since 2001 and is also a writer, researcher and punch-counter for CompuBox, Inc. He is the author of “Tales From the Vault: A Celebration of 100 Boxing Closet Classics. To order, please visit Amazon.com or e-mail the author at [email protected]to arrange for autographed copies.