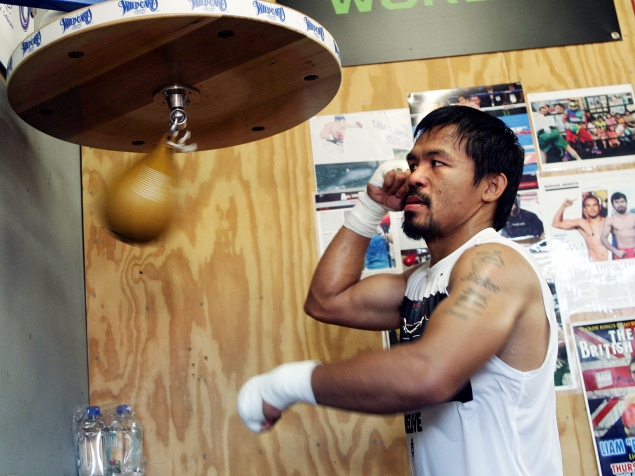 The HBO-Pay Per View-televised fourth bout between Manny Pacquiao and Juan Manuel Marquez on Dec. 8 could be preceded by the return of unbeaten former featherweight titleholder Yuriorkis Gamboa, an IBF lightweight title defense by Miguel Vazquez and a bout featuring undefeated prospect Javier Fortuna, according to Top Rank CEO Bob Arum.

The entire card takes place at the MGM Grand in Las Vegas.

Last November, Pacquiao (54-4-2, 38 knockouts) won an unpopular and highly-disputed majority decision over Marquez (54-6-1, 39 KOs), who has also battled Pacquiao to a draw and suffered a split-decision loss.

Pacquiao is coming off a controversial split-decision loss to Tim Bradley in June.

A Cuban Olympic gold medalist, Gamboa has not been in the ring since last September, when he decisioned current WBC featherweight beltholder Daniel Ponce de Leon.

Beltran is coming off a split-decision loss to Roman “Rocky” Martinez on the Julio Cesar Chavez Jr.-Sergio Martinez pay-per-view undercard.

Vazquez (32-3, 13 KOs), who defended his belt via split-decision over Marvin Quintero, will make a defense against unbeaten prospect Mercito Gesta (26-0-1, 14 KOs), according to Vazquez’s matchmaker, Sean Gibbons of Zanfer Promotions.

“Vazquez-Gesta is done. That’s ready to rock and roll. We were happy to have that nice 12 rounds of sparring with Marvin Quintero,” said Gibbons. “That’s helped us to prepare for Mercito Gesta, because they’re both southpaws, so that worked out perfect for us.”

In a clash of unbeatens, Fortuna (20-0, 15 KOs) will pursue his third straight knockout, and his fifth stoppage victory in his past six fights against Patrick Hyland (27-0, 12 KOs).