Five-division title-winner Sugar Ray Leonard spoke to RingTV.com on Monday evening after having spent the day addressing his own personal childhood sexual abuse issues as well as the general problem it poses in society before a sold-out audience at Penn State University in State College, Pa.

Leonard, 56, spoke out at the university’s Child Sexual Abuse Conference in the hopes of encouraging other victims to report abuse to police.

Leonard’s appearance came in the wake of former Penn State assistant football coach Jerry Sandusky, 68, being sentenced to 30-to-60-years in prison for sexually assaulting 10 boys he befriended through his charity for at-risk youth.

Leonard detailed his own issues in his book, The Big Fight: My Life In and Out of The Ring, which recalls his having been sexually abused by a former coach as well as his struggle with cocaine abuse.

A 1976 Olympic Gold medalist, Leonard said that he is spending this week with relatives in his native Prince George’s County, with plans to attend Thursday’s The Fight Night For Children event at The Washington Hilton, in Washington, D.C., if weather permits.

Leonard said that much depends on the situations dictated by Hurricane Sandy, aka “Frankenstorm,” which has plagued the East Coast starting early this week.

Leonard spoke to RingTV.com about his appearance at Penn State, as well as his career (see Leonard’s skinny at the bottom of this post) and his view of certain boxers today. 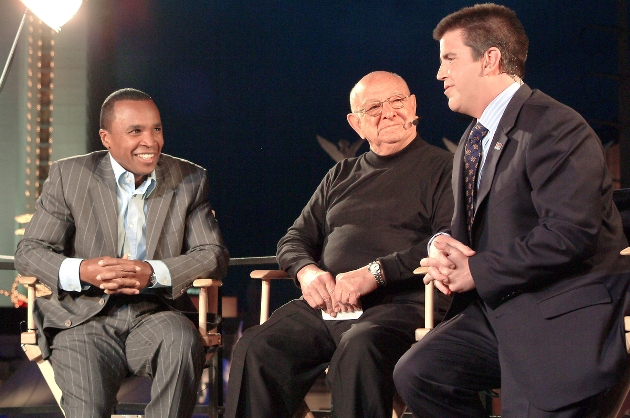 RingTV.com: From the standpoint of one of the victims of the Penn State tragedy, what would you say to them, and what do you hope was accomplished today?

SRL: Well, you know, this was one of those things that it took so much of me and out of me to speak on that platform today.

I mean, I’ve made those revelations in the book. But that’s different than me standing in front of hundreds of people and talking about it, even though some of them, maybe even the majority of them, might have been survivors.

There was a collection of people that were survivors — doctors, psychiatrists, and police officers, and they’re just trying to gain more and more knowledge, and more of an understanding of what takes place.

What to look for, what to look out for, and how to listen and to get closer. But, you know, I just feel that you’ve got to speak up and speak out. Let it go. You have to let that poison go as hard as it is.

Because it can become such a stigma and a sign of weakness. You can be debated and people can say that it was your fault.

Yet, sometimes, I’m even challenged by some knucklehead, or some person who will say, “well, that didn’t really happen,” or, “if it did happen, why don’t mention the guy’s name?”

Because it’s not about his family, it’s about him. There’s no one way to do it, or no one answer to the questions you’re asking me.

That’s why I say, “listen, we’re coming together as a family, as police officers, and as doctors,” and with that type of collaboration, we can maybe find the best way to approach this thing.”

But I do tell kids, and I do tell people that you’ve got to speak up and speak out after being abused or raped or whatever.

Until you speak up and you let go of that, and you speak out against it, it’s going to continue to devour your insides. It eats up your heart.

That’s what I’ve felt, and that’s what I’ve said. I could have written a speech, but a speech wouldn’t do justice to it. Because I spoke from my heart, which made it difficult.

But it also, at the same time, made it easier for people to understand where I was coming from. The irony of it was that I stood there, a former world champion, an athlete, a fighter and this and that.

But yet I let this thing that took place in my life when I was a teenager — continue to affect me. It knocked me down, but it didn’t knock me out. 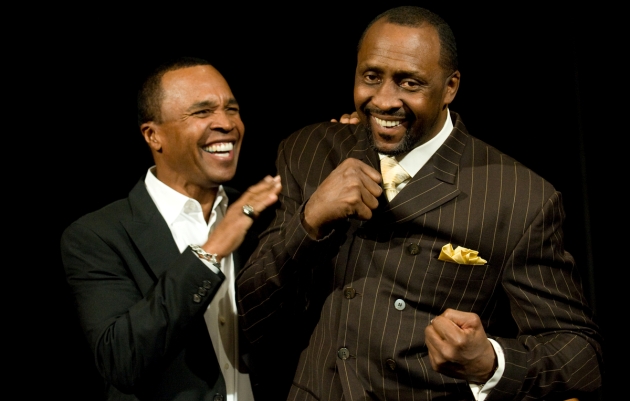 This thing is not going to go away. It’s been an eye opener from the standpoint of all of the cases. Scenarios such as this, they’re more prevalent than we can imagine.

RingTV.com: Switching the subject, what are your thoughts on the craft of boxing as it pertains to today’s fighters?

SRL: No doubt, I see talent out there with these guys, whether it’s Paulie Malignaggi or someone else. There are kids with talent. What I see is boxing.

I see guys with God-given talent. There are guys who can fight, and who can box, and who can punch. I don’t have a problem with that. I see what I see, and I see talent.

RingTV.com: Are there any throwback fighters today who you believe conjure the days of the fights, say, between yourself, Marvin Hagler, Thomas Hearns, Roberto Duran?

SRL: Andre Ward. I like Andre Ward as a fighter. I think that Andre Ward is the whole package. I think Adrien Broner is a talented fighter and a big puncher, so I like him too.

RingTV.com: Why do you feel that you rarely, if ever, had a fight where there wasn’t some sort of toe-to-toe action, the second Roberto Duran fight, notwithstanding?

SRL: I know where you’re going with this, but I don’t know how else to answer this other than to say that that was my style. To me, I just fought. I’m a fighter. I can’t answer that in any other way.

RingTV.com: Would fans today boo your second fight with Duran due to lack of action?

SRL: Against Duran? I don’t believe that would be the case, because I feel that I did throw punches, and that was a combination of throwing punches, entertainment and fighting.

So I don’t see that. I don’t agree with that. I think that fans are fans, and that there was action there when necessary. 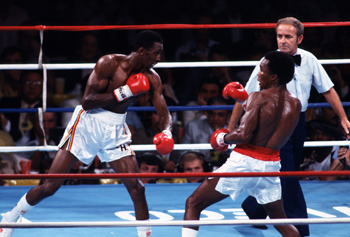 Leonard earned his first major title belt by vanquishing previously unbeaten Wilfred Benitez for the WBC welterweight crown via 15th-round stoppage in November of 1979. He lost the title in his second defense against legendary former lightweight champ Roberto Duran, who out-pointed him over 15 ferocious rounds in June of 1980.

Leonard then regained the title with an eighth-round TKO of Duran in the famous “No Mas” return bout in November of 1980, avenging the loss from five months earlier.

Next, Leonard rose to the junior middleweight class for a ninth-round stoppage of previously unbeaten Ayub Kalule, dethroning the WBA beltholder in June of 1981.

Leonard’s next major victory would not come until almost five years later, when he ended a nearly three-year layoff by vanquishing Marvin Hagler as WBC middleweight beltholder by split-decision in April of 1987.

In November of 1988, Leonard accomplished a coup by getting WBC light heavyweight titleholder Donny Lalonde to put his belt on the line at a catchweight of 168 pounds, with the WBC’s vacant super middleweight belt also on the line.

Leonard stopped Lalonde by ninth-round stoppage, taking both belts in the process, before closing out his career with a draw and a unanimous decision opposite Hearns and Duran, respectively, before losing his last two comeback bouts against Terry Norris and Hector Camacho.