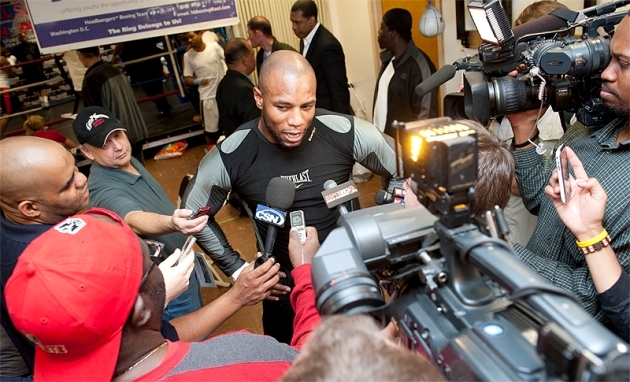 Banks, meanwhile, has also been charged with training heavyweight champion Wladimir Klitschko (58-3-1, 51 KOs) for the Nov. 10 defense of his RING, IBF, WBA and WBO belts against 6-foot-7 1/2, Polish-born challenger Mariusz Wach (27-0, 15 KOs) at the O2 World Arena in Hamburg, Germany, in the wake of the passing of Klitschko’s former trainer, Emanuel “Manny” Steward, who died on Thursday at the age of 68.

Steward was last in the corner of Klitschko for his 16th straight victory and his 12th knockout during that run when he scored a sixth-round knockout of Tony “The Tiger” Thompson in a July rematch of Klitschko’s 11th-round stoppage of Thompson in July of 2008.

A resident of Brandywine, Md., Mitchell will be after his 24th straight win and his 11th consecutive knockout against Banks, his last two being early-round KOs of Timur Ibragimov and Chazz Witherspoon in December and April, respectively.

A former scholarship linebacker at Michigan State, Mitchell was named Maryland’s Defensive Player of the Year at Gwynn Park High in Brandywine by the Associated Press, and began boxing shortly after graduating from college with a degree in criminal justice.

Managed by Sharif Salim and trained by Andre Hunter, Mitchell is considered by many to be America’s best hope at ending the country’s drought of champions in a division dominated by the Ukrainian Klitschko brothers, Wladimir and Vitali Klitschko.