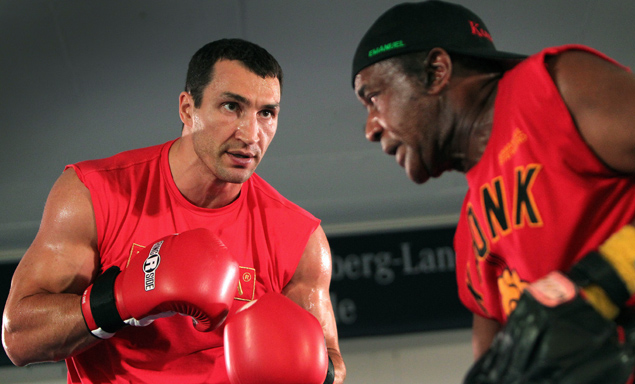 Emanuel Steward works mitts with heavyweight champ Wladimir Klitschko, the final world champion of his legendary training career. Steward, who was one of the most recognizable and beloved figures in boxing, passed away in Chicago at 68.

Emanuel Steward, one of the greatest and most beloved boxing trainers in the history of the sport, passed away on Thursday following surgery for diverticulitis, according to the Detroit Free Press, which spoke with his sister, Diane Steward-Jones. He was 68.

The legendary Detroit native, who had been hospitalized for the digestive disease since September, was reportedly surrounded by family and loved ones at the time of his passing.

“His sister confirmed it to the media in Detroit. He died at about 2:46 p.m., Eastern Standard time,” said Mike Brudenell, a sports writer for the Free Press. “He passed away, she said, with no pain. It’s a sad day for the city of Detroit, the state of Michigan, and, obviously, for boxing around the country and the world.” 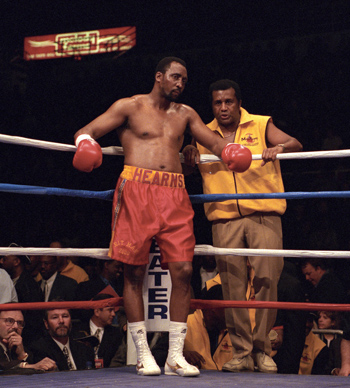 That’s not an understatement. Steward, who was born in 1944, made himself, star pupil Thomas Hearns and Detroit’s Kronk Gym, where he trained fighters for decades, into household names around the world.

A talented amateur boxer as a youth, Steward, who won the national Golden Gloves as a bantamweight in 1963, began training kids, starting with his half-brother, James, in 1969. He quickly learned that he had a knack for interacting with people and for teaching the Sweet Science.

Seven of his boxers won the Detroit Golden Gloves titles in 1971, including Hearns, the first amateur boxer he turned pro (in ’77) and the star of his future stable.

Steward developed Hearns from a skinny child into a hall-of-fame boxer that many consider to be an all-time great. He also developed Detroit natives Hilmer Kenty (his first fighter to win a world title), Jimmy Paul, Milton McCrory, Duane Thomas and Leeonzer Barber into major beltholders during the 1980s.

However, top fighters from around the world ventured to the Kronk Gym to seek Steward’s services. Hall of famers Lennox Lewis, Mike McCallum, Julio Cesar Chavez and Jeff Fenech are among those fighters.

He trained McCall, regarded as little more than a journeyman at the time, to upset then-WBC beltholder Lewis in 1994. He then took over training duties with Lewis, who he helped remake into the undisputed champ during the second half of the 1990s.

He also revamped the career of Klitschko after the talented Ukrainian, then the WBO beltholder, was knocked out by Lamon Brewster in 2004. Over the second half of the 2000s, Steward guided Klitschko to unified titles and THE RING championship.

He trained Holyfield for his championship-regaining rematch with Riddick Bowe, the only fight of their trilogy that Holyfield won.

Other fighters he “resurrected” include British light heavyweight Dennis Andries, who lost his WBC title to Hearns in 1987, but twice regained that belt under Steward’s training; Kermit Cintron, who won the IBF welterweight title with Steward after suffering his first loss to Antonio Margarito; and Miguel Cotto, who won the WBA 154-pound belt with Steward in 2010 after losing to Manny Pacquiao.

Steward trained too many “stars” of the sport, including Oscar De La Hoya and Naseem Hamed, to mention. Even the stars who did not train with Steward in the professional ranks revere the man.

Sugar Ray Leonard, who engaged in THE RING’s 1981 Fight of the Year with Hearns, worked briefly with Steward prior to making the 1976 U.S. Olympic team.

“One of the ways that I was able to qualify for the 1976 Olympics is that I went to the Kronk Gym in Detroit,” Leonard told RingTV.com’s Lem Satterfield. “That was before Tommy Hearns became a professional. Emanuel took me into his arms and into his gym, and I think that I was there for a couple of weeks in preparation for the trials.

“Detroit took me in as a child over there. I was like, 20, so this was just prior to the Olympics. It’s been so long, almost 40 years ago. We had a bond.

“(His death) is devastating. Thank God I had the chance to see him in Las Vegas at the WBC boxing convention. We got a chance to talk a little bit. I had heard that he was sick, but Manny is such a fighter himself that he can put on this front. Besides looking a little smaller and a little thinner, he looked pretty good. But I don’t think about those times when I saw him like that. I think about the good times that we had together.”

Many in the industry regard Steward, who served as an insightful commentator on HBO’s Championship Boxing series in recent years, as the greatest trainer ever.

Virgil Hunter, who received the Boxing Writers Assoc. of America’s award for Trainer of the Year last year, is among them.

“It’s a big loss for boxing. It’s sad,” Hunter told RingTV.com. “He’s one of the mentors. I knew Manny personally, and we went back to the amateur days. I can say this in confidence: In my mind, Manny was the best trainer ever in boxing.

“The reason why I say that is that he could develop his products and he was a great diamond finisher. But he raised them. He didn’t have to give an explanation to why he was able to finish up a diamond that somebody else had mined. That’s because he had mined so many of them himself.

“He loved talking about the good old days, watching these young guys develop. Jimmy Paul, Dwight Davison, and people like that who he developed from scratch. To me, that’s the sign of a great man. Manny had a hold on boxing when he arrived, and he had a solid grip on it when he left and now that he’s gone.”

Steward guided the pro career of middleweight contender Andy Lee, whose promoter Lou DiBella lauded Steward as “the greatest teacher of his generation.”

“He was a giant in our business,” DiBella said. “He was the greatest teacher of his generation and a great ambassador for the sport. As long as there’s boxing, no one will forget Emanuel Steward.

“Being at HBO for all of those years, I had the chance to work with him while he was a trainer when I was at HBO. He was also a great announcer. He was a good friend and he had a tremendous sense of humor, he really did. He was a funny guy. He was fun to be around and he loved boxing. He loved the sport. I have so many memories. I don’t have any one memory.”

Countless individuals connected to sport, and those who simply love boxing, can say the same thing.

Steward was inducted into the International Boxing Hall of Fame as a trainer and manager in 1996.