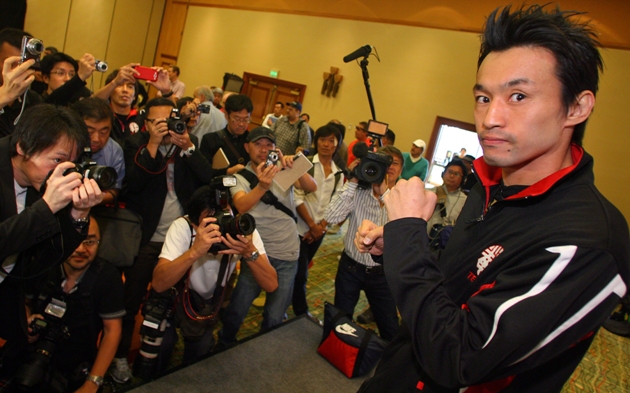 To say that Toshiaki Nishioka has been a beast in the ring would be an understatement. It is more appropriate to say that the 36-year-old junior featherweight is the biggest monster out of Tokyo since Godzilla.

Making only his fourth appearance in the United States when he meets Donaire, the Japanese southpaw last suffered defeat by unanimous decision to long-reigning WBC bantamweight titleholder and Thai legend Veeraphol Sahaprom in March of 2004 — a span of eight years and seven months.

Nishioka will be ending a nearly year-long absence from competition against Donaire, having last been in the ring for a unanimous decision over ex-beltholder Rafael Marquez in defense of his WBC belt on Oct. 1 of last year at the MGM Grand in Las Vegas.

The victory over Marquez made Nishioka the first Japanese fighter to successfully defend his crown on American soil. Perhaps the only reason Nishioka isn’t still a champion is the fact that he subsequently vacated the title, which is now held by Abner Mares.

“There’s not much reason for Japanese champions to leave Japan. They’re promoted better at home and they’re paid better there,” said Nishioka, through translator Nobu Ikushima.

“However, I’ve always kept my eye on titleholders in my weight class and their title fights that took place outside of Japan. I always wanted to fight the best fighters in my division and I was always willing to travel to their country to fight them if I had to. I want to be the world champion, not just a Japanese champion.”

For longevity and craftiness, Nishioka ranks among the sport’s best — right up there with 35-year-old Floyd Mayweather Jr., 37-year-old Sergio Martinez and 47-year-old Bernard Hopkins.

“This guy is very experienced,” said Donaire’s trainer, Robert Garcia., of the veteran Nishioka, whose win over Marquez represented his seventh defense. “He’s one of those guys who has been in it for so many years. He’s done everything with every type of opponent.”

Nishioka’s 12th-round stoppage of Genaro Garcia in January of 2009 represented the first defense of the belt Nishioka earned with a unanimous decision over Napapol Sor Rungvisai in September of 2008.

Nishioka has been stopped only once, that being by Masahiko Nakamura in the fourth round of his second professional fight in February of 1995, but Donaire is looking to change that.

In the ring, Donaire wants to be King Kong

“Definitely, against Nishioka, we can’t let our guard down. We are working with everything. We’re going back to the old style of Nonito Donaire, and we’re being smart. With the proper game plan, my power will be more dominant when it comes to being set up,” said Donaire, who turns 30 in November.

“Nishioka did a great job against Marquez, but Marquez is a lot slower than I am. So none of those punches will land, obviously. But he does have power, and that’s something that he can probably try to do is to land and to set up his straight [left hand,] but we’re very mindful of his advantage.”

Donaire is search of his first big stoppage win since February of last year, when his second-round knockout dethroned Fernando Montiel as WBO and WBC bantamweight titleholder.

Montiel represented Donaire’s second win as a bantamweight, his fourth straight by stoppage and his 10th in 25 consecutive triumphs, and it followed a fourth-round knockout of Volodymyr Sydorenko, who suffered three knockdowns and a broken nose in the process.

Since Montiel, however, Donaire has gone the distance in three straight victories, starting with Omar Narvaez, a previously unbeaten WBO junior bantamweight titleholder, in defense of his WBC and WBO bantamweight titles in October of last year.

In February, Donaire earned his WBO 122-pound belt by split decision over Wifredo Vazquez Jr., and followed that up by dethroning Jeffrey Mathebula for the IBF title in July.

Donaire has, however, been successful in the past against left-handers such as ex-beltholder Vic Darchinyan and Hernan Marquez, whom he knocked out as a flyweight and a junior bantamweight, respectively. 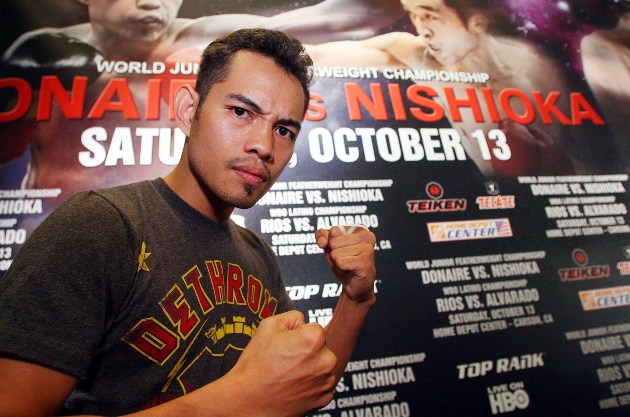 Nishioka’s consistent jab and better fundamentals will keep Donaire honest for long stretches of the fight — and the Japanese master will outbox the favored fighter during these periods. But the Filipino Flash’s unorthodox athleticism and ability to “free style” in the ring will occasionally set up power punches that hurt the older boxer.

The experienced southpaw will survive the rocky moments, and even catch Donaire when the Filipino tries to close the show, but the moments when Nishioka is rocked — and possibly dropped — will be the difference on the scorecards of what should be an intense, elite-level chess match.

Nonito Donaire UD 12 Toshiaki Nishioka: Some power in Nonito Donaire’s mix of speed and anticipation appears to have been lost in his move up through four weight classes.

That could prove problematic at super-bantam against Japan’s popular Toshiaki Nishioka, who scored a unanimous decision over accomplished Rafael Marquez in November, 2011.

Since then, however, the 36-year-old Nishioka has been idle for reasons that aren’t clear. Meanwhile, Donaire, 29, fought twice, winning two decisions at 122 pounds over Wilfredo Vazquez Jr. and Jeffrey Mathebula.

Against Mathebula, Donaire encountered a bigger fighter with advantages in reach and height. Donaire appeared to struggle, yet scored a knockdown in the fourth and cracked the South African’s tooth in a later round.

Donaire did more than earn a decision. He gained toughness that should allow him to prevail in his third bout at super-bantam against the experienced Nishioka.

Nishioka also has a diamond-cutter quality left cross — hard, fast and supremely accurate — and he has proved his worth away from home with victories over Rafael Marquez in Las Vegas and Jhonny Gonzalez in Mexico.

To win, Donaire must fight much better than he did against Jeffrey Mathebula, whose height, reach, jab and volume puzzled him for long periods.

The guess here is that he will. He’s the younger man, and Nishioka is coming off an 11-month layoff, usually poisonous for a 36-year-old in the very light weight classes.

But Nonito Donaire is on another level when it comes to pure boxing skills. I got Nonito winning this fight by unanimous decision in a entertaining fight. 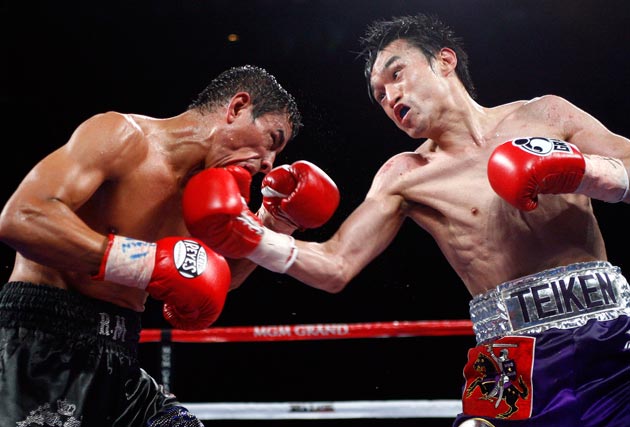 A southpaw with a sneaky left hand, Nishioka will need to pump his right jab at will in order to keep Donaire on the defensive and rack up points.

Ultimately, I like Donaire to call on a relatively unused weapon in his arsenal–the lead right hand–to do enough damage to pull out the fight.

However, I think Nonito Donaire is a special talent who is still on the come. We haven’t seen his best yet, and I do think we’ve seen the best of Nishioka.

I look for Nishioka, using his veteran skills, to provide early problems for Donaire. However, I think the youth and power of Nonito will eventually spell the end for Nishioka.

Nonito Donaire W 12 Toshiaki Nishioka: Nonito Donaire confesses to struggling of late and is promising a return to the basics which took him to the top.

He will need to do that – and more – if he is to dismantle Toshiaki Nishioka. It should be a classic whatever but I’m just leaning towards THE RING’s No 1 junior featherweight.

I worry that a a year-long layoff will have negative effects for the 36-year old Nishioka, who I see having trouble with Donaire’s quickness throughout. 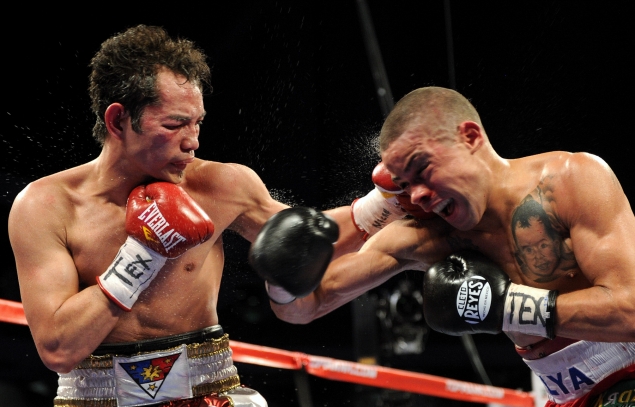 I think Donaire will rise to the occasion. Donaire, too, is a gifted boxer but has quicker hands and feet and more power than his Japanese foe.

I think Donaire will gradually wear Nishioka down — setting up the possibility of a late KO — but he will more likely claim a clear, unanimous decision. 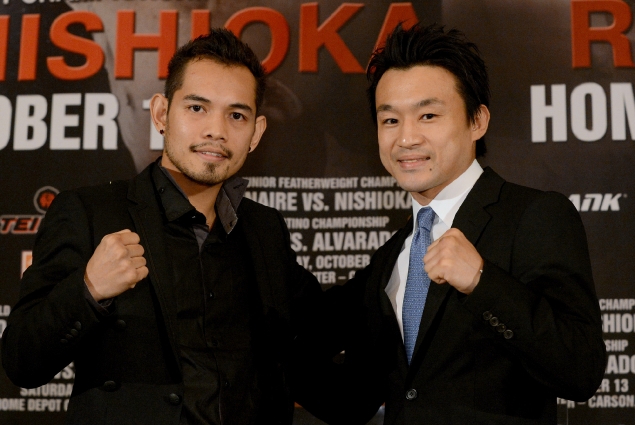 By a dominant, 15-1, the experts favor Nonito Donaire to end the 16-bout, nearly nine-year long winning streak of Toshiaki Nishioka.