Bailey: Alexander to get ‘ass whooping’ 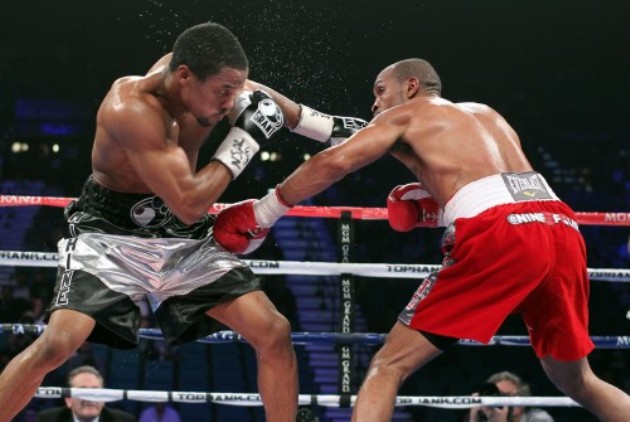 Former IBF and WBC junior welterweight titleholder Devon Alexander will be in for an “ass whooping” when he challenges IBF welterweight beltholder Randall Bailey on the loaded undercard of an Oct. 20 event at The Barclays Center in Brooklyn, N.Y., according to Bailey.

“Training has been great. Everything has gone very well,” said Bailey, 38, from his Florida training camp, in a prepared release. “All I’m focused on is my October 20th fight in New York City. I could have cared less where it was, as long as it wasn’t [Alexander’s hometown] St. Louis, Missouri.”

Bailey (43-7, 37 knockouts) is coming off a come-from-behind, 11th-round knockout of Philadelphia’s Mike Jones on the undercard of Tim Bradley vs. Manny Pacquiao in June. Jones subsequently parted ways with longtime trainer, Vaughn Jackson, after the loss.

But Bailey has been questioned by Alexander’s trainer, Kevin Cunningham, as to the validity of a back injury he sufffered which forced the postponement of his clash with southpaw Alexander (23-1, 13 KOs) from the originally scheduled date of Sept. 8.

“Kevin Cunningham is crazy. He’s not going to get hit, and that’s why he’s been talking so much smack. Vaughn Jackson did the same thing, and he got fired after I knocked out Jones. I understand why he’s so upset, though. Now, he has to wait a little longer to get his two checks for this fight as manager and trainer,” said Bailey.

“I’m glad Cunningham has pumped me up because, when I hit this kid, just touch him, he’s going to know he’s in big trouble. All of his talking is going to end up in an ass whooping for his boy. Once the bell rings, it’s just me and him, and I know what to do. He’s been hurt by smaller guys than me. He’s smaller than Jones and everybody saw what I did to him.”

Against Jones, Bailey won his fourth straight bout, having last suffered defeat by 11th-round stoppage against Juan Urango in a failed bid to earn the IBF’s junior welterweight belt in August of 2009.

In his next fight after facing Bailey, Urango was knocked out in the eighth round by fellow Alexander, who has scoffed at Bailey’s assertion that he already had taken the heart out of Urango.

“I think Team Bailey should send me a thank you card,” said Cunningham, “since my comments have motivated and inspired their old-assed fighter.”

Bailey, nevertheless, defended his need to postpone the fight during an interview with RingTV.com, claiming that the injury was the result of a collision with a larger sparring partner after he had thrown a punch.

“I’m not playing any games. Nobody has ever given me anything. I’ve earned everything I’ve done. I wanted this fight to happen as soon as possible. I don’t have another five years left in my career,” said Bailey.

“I’m the one who said to make this fight in the first place. Cunningham’s way out of line. I guess they wanted me to fight a guy with a cane, wearing a neck brace. There was never a question that this fight would not take place.”

Tickets are on sale for the card that will be the first boxing event to take place at the new, state-of-the-art sports and entertainment venue. Tickets start at $50 and are available at www.barclayscenter.com, www.ticketmaster.com, all Ticketmaster locations, or at 800-745-3000.