A look ahead to future Hall of Fame ballots 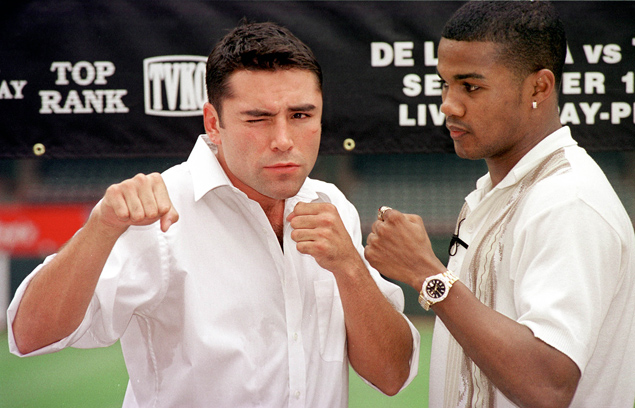 Oscar De La Hoya and Felix Trinidad, posing at a media event prior to their anticipated showdown in 1999, are a lock to be voted into the International Boxing Hall of Fame together in 2014

Arturo Gatti’s presence on this year’s International Boxing Hall of Fame ballot has created a giant stir within the boxing community. The robust support he inspired during his career was revived last week as his backers lobbied hard for his inclusion while those who felt otherwise didn’t hesitate to make their counterpoints. The results of this first – and perhaps only – round of debate will be known in early December when the IBHOF announces the Class of 2013.

One of the more intriguing exercises this boxing writer engages in is guessing the names that will be on future ballots and handicapping their chances for enshrinement. While there have been a few surprises along the way, most of the time the assessments proved correct.

Now that the new names for the Class of 2013 ballot have been revealed two more questions pop to mind: First, who will be featured on ballots in the coming years? And second, what are their chances of achieving the ultimate post-retirement honor?  Assuming no major changes in the balloting process, here’s what may happen over the next several years:

The Potential IBHOF Class of 2014

As was the case in 2007 when Modern ballot rookies Roberto Duran, Pernell Whitaker and Ricardo Lopez were swept into Canastota, and in 2011 when Mike Tyson, Julio Cesar Chavez and Kostya Tszyu produced record crowds, the identity of the three-man Modern Class of 2014 is virtually set in stone. They all have the ingredients needed for elevation: Immense physical gifts, lengthy stays at the top levels of the sport and massive star power. Visitors would be well advised to reserve their tickets early and book their hotel rooms even more in advance than usual, for the following lineup promises to attract considerable mainstream media coverage and overflow crowds. Without further delay, here’s the guess regarding who will be enshrined in June 2014:

From the time he was a teen-ager, “The Golden Boy” was a can’t-miss talent and – for the most part – his career played out the way both fighter and media had expected. Though he had a few tougher-than-anticipated bumps along the way, De La Hoya lived up to the crushing expectations – and his mother’s dying wish – by winning the United States’ only boxing gold in Barcelona. In an era when mainstream media decision-makers largely turned their backs on boxing, pay-per-view cards topped by De La Hoya forced them to snap to attention for at least a few days. That’s because his talent, in-ring performances and charisma were beyond doubt, as will be his enshrinement in his first year of eligibility.

Credentials for Elevation: Besides his stellar 223-5 (163) amateur career that was capped by Olympic gold, De La 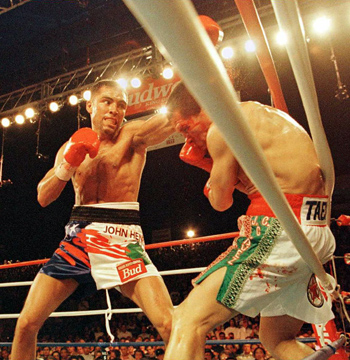 His honors include THE RING Fighter of the Year in 1995 and the sixth round of his fight with Ike Quartey was deemed Round of the Year in 1999. In fact, De La Hoya will likely be inducted a second time a few years down the road for being the driving force behind Golden Boy Promotions.

What Critics Will Seize Upon: Some will say De La Hoya benefited from judicial kindness, pointing to his disputed decision victories over Whitaker, Quartey, Molina and especially Sturm, one of 2004’s most outrageous verdicts. Supporters will counter by saying he was victimized against Trinidad and Shane Mosley (fight two) and some (including one of the official judges) believe he deserved to hand Floyd Mayweather Jr. his first loss.

His detractors will also point out his first loss to Mosley, where, like the Trinidad and Mayweather fights, De La Hoya lost strength down the stretch. They also will cite his one-punch KO loss to Bernard Hopkins in which all four major middleweight belts were at stake and his thrashing at the hands of Manny Pacquiao, a fight in which the naturally larger De La Hoya was favored by nearly 2-to-1. In that fight the “Pac Man” dished out an unholy hiding, landing 59 percent of his power punches en route to cavernous connect edges of 224-83 (total) and 195-51 (power) and a corner retirement between rounds eight and nine.