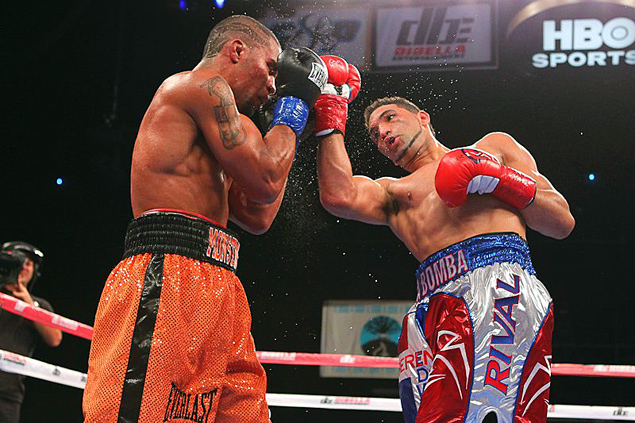 Now that it’s over, Rodriguez (22-0, 15 knockouts) believes that former undisputed middleweight titleholder Pavlik has heard that message loud and clear.

“I think that he knows that I’m a high-risk fight that he doesn’t feel comfortable in taking. I see Kelly Pavlik has a big name, and he knows that he could be fighting for a world title,” said Rodriguez, who is 27.

“He knows that fighting one of the top guys, he would have a higher reward against them, but that by fighting me, he’s basically taking on that same risk. I think that’s how he sees it.”

Rodriguez, of Worcester, Mass., entered the fight against Escalera (13-1-1, 12 KOs) after having scored an impressive unanimous decision over hard-hitting Donovan “The Bomb” George (23-2-1, 20 KOs) in March.

After re-hydrating to 186 pounds following the weigh-in the day before the clash, Rodriguez landed 58 percent of his total power punches (195 of 385), according to CompuBox, in a bout during which Escalera’s badly bleeding right ear prompted referee Steve Smoger to finally step in and halt the bout 12 seconds into the final round.

Pavlik (40-2, 34 KOs) is coming off his third straight victory with July’s unanimous decision over New York’s Will Rosinsky (16-2, 9 KOs), who had won two straight since his previous loss — that being by unanimous decision to Rodriguez in October of last year.

Rodriguez, prompted by his promoter, Lou DiBella, mentioned Pavlik, who is promoted by Top Rank, during the post-fight interview after vanquishing Escalera.

“I want Kelly Pavlik, which is funny, because, apparently, he thinks I’m horrible. But in one sentence he says that I’m horrible, and then, in the same sentence, he says that there is not enough money there to fight me,” said Rodriguez.

“But if I’m so horrible, and he thinks that Rosinsky beat me, and he’s already beat Rosinsky, then there shouldn’t be any reason for him not to take the fight.”

Rodriguez knows well the pedigree of Pavlik, who burst onto the scene with a seventh-round knockout of then-undisputed and previously undefeated middleweight titleholder Jermain Taylor in September of 2007.

Pavlik was later dethroned as WBC and WBO 160-pound titleholder via unanimous decision by Sergio Martinez in April of 2010.

“I have nothing but respect for Kelly Pavlik. He’s done a lot for the sport. He beat Jermain Taylor at a time when Jermain Taylor was the man,” said Rodriguez.