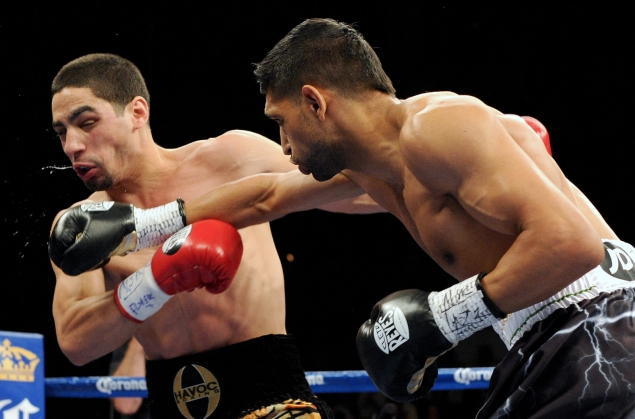 Khan (26-3, 18 knockouts) and Molina (18-0-1, 7 KOs) are to be on hand at a Tuesday press conference at The Mayfair Hotel in London announcing their fight, along with Golden Boy CEO Richard Schaefer

Khan-Molina will be televised live on Showtime in the United States, as well as live on Sky Sports 1HD in the United Kingdom at 1 a.m. GMT on Dec. 16.

Khan-Molina is slated for the same night on which rival promoter Top Rank has scheduled the HBO-televised return of WBO welterweight titleholder Tim Bradley (29-0, 12 KOs), who is in ongoing negotiations for a rematch with IBF junior welterweight beltholder Lamont Peterson (30-1-1, 15 KOs), that would take place at Marlins Park in Miami.

“It would be a fight for the WBO welterweight championship,” said Top Rank CEO Bob Arum. “We’ve sent contracts out, but it’s not a deal until it’s a deal.”

Peterson is 3-0-1 with two knockouts since falling to Bradley by unanimous decision in December of 2009, and is coming off a disputed split-decision win over Khan at the Washington Convention Center in December of last year.

Bradley is coming off a controversial split-decision in June that dethroned Manny Pacquiao as the WBO’s 147-pound titleholder and ended his 15-bout winning streak that included eight stoppages.

Schaefer is in London and could not be reached for an immediate comment. But in an earlier interview with RingTV.com, Schaefer indicated that the pro debuts of fighters from the 2012 Olympic Games could also happen as part of the Dec. 15 event.

“In the afternoon, as a lead-in, following an NCAA basketball game on CBS, we will have, live, on CBS, there will be boxing. It will be another ‘Night of The Olympians,’ and we will be announcing shortly who will be on that card,” said Schaefer of an agreement between Golden Boy, Showtime Sports and CBS Sports.

Schaefer said that among those likely to appear “on one of the platforms” is unbeaten heavyweight prospect Deontay “The Bronze Bomber” Wilder, of Tuscaloosa, Ala., who will be after his 26th knockout in as many wins without a loss.

“Basically they’re going to do a marathon show, with the first part of it being on CBS, and the late part of it will be on Showtime,” said Deas. “We don’t have an opponent yet, but we’re looking for something big.”

A 2008 Olympic bronze medalist who turns 27 on Oct. 22, the 6-foot-7 Wilder is coming off a second-round knockout over previously undefeated Damon McCreary (14-1, 10 KOs), of Detroit, on Sept. 8. McCreary had come up with stoppage victories in three of his previous four fights.

Prior to facing McCreary, Wilder scored  a first-round stoppage of Trinidad and Tobago’s Kertson “The Warrior” Manswell on Aug. 4 which had followed June’s third-round knockout of former heavyweight title challenger Owen Beck.

Meanwhile, Khan will be in his first fight under 2011 Trainer of The Year Virgil Hunter against Molina, having left  Freddie Roach after 10 bouts and an 8-2 mark that includes four stoppage wins.

Khan’s move comes in the wake of his fourth-round knockout loss to Danny Garcia, whose triumph added Khan’s WBA belt as well as the division’s RING championship to the WBC crown he already owned in July.

In hiring Hunter, Khan will be under the tutelage of the man who has guided the career of RING, WBA, WBC and Showtime Super Six World Super Middleweight Boxing Classic Champion Andre Ward, a 2004 Olympic gold medalist who was named Fighter of The Year for 2011.

Khan, who turns 26 on Dec. 8, began working with Roach following his 54-second knockout loss to Breidis Prescott as a lightweight in September of 2008. From there, Khan won eight straight fights, four of them by knockout, and earned two major title belts.

But the loss to Garcia was the second in a row for Khan, whose winning streak under Roach ended with a controversial split-decision loss to Lamont Peterson last December.

Khan is looking to get back on the winning track against Molina, who is 26.