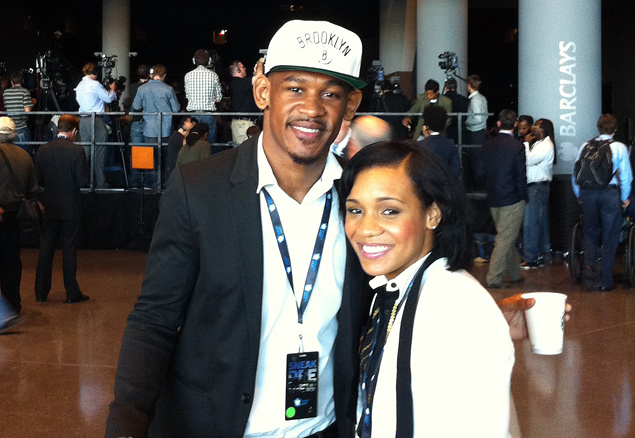 Daniel Jacobs credits his girlfriend and the mother of his 3-year-old son, Natalie Stevens, for helping him keep faith during his battle with cancer and the paralysis a large tumor on his spine caused for months last year.

Daniel Jacobs wasn’t expecting to be hit with overwhelming emotion when it was his turn to take the podium during the kick-off press conference for the inaugural boxing card at Brooklyn’s Barclays Center headlined by the Danny Garcia-Erik Morales rematch.

But as the Brooklyn native stared out into the assembled media and fans he was momentarily taken back to a time when it seemed his world was collapsing. Back to the days of looking up through teary eyes from a hospital gurney barely able to recognize a familiar face.

He thought about the days when he was forced to drag himself on his hands to open a door, when he was pinioned to a wheelchair. Back to a time when he had to use crutches to get around, then a cane.

The former middleweight standout thought about when he stared at the prospect of never fighting again and his own mortality.

It all gripped Jacobs at the podium, there at the Marriot New York at Brooklyn Bridge in late August.

It wasn’t known who Jacobs was going to fight on the huge Showtime-televised Golden Boy promotion and it didn’t really matter. It still doesn’t. Jacobs has already won his battle, beating paralysis and then cancer.

“I was just numb when I was up there, because this is something I thought of on my death bed,” said Jacobs (22-1, 19 knockouts), who hasn’t fought since last March, when he stopped Robert Kliewer in the first round in California.

“People saw what I went through, and to even get here, it was my ultimate goal. I’m fighting at home. When I stood up there and spoke, it was one of those moments I’ll cherish for the rest of my life. It told me I came back from everything.” 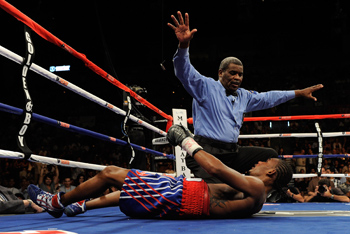 In mid-March 2011, after defeating Kliewer, Jacobs embarked on a USO tour to Iraq with a contingent of Golden Boy Promotions fighters. He was still in the midst of gathering himself up after his disastrous fifth-round knockout loss to Dmitry Pirog, on July 31, 2010, fighting on the undercard of the Juan Manuel Marquez-Juan Diaz rematch in Las Vegas.

A world he imagined was gone with one punch. All the hard work, dedication, and commitment he put into the sport was flushed away. As with the cruelty of boxing, Jacobs went from the pinnacle to tumbling down into no-man’s land. No one called. No one seemed to care, save for those closest to him.

However, Jacobs was steadfast in searching for a new direction. He employed Hall-of-Fame trainer Freddy Roach. He plowed through Kliewer. He began feeling good about himself again. While over in Iraq, Jacobs ate a camel burger. It tasted good, but he began feeling queasy soon after.

“I was thinking the camel burger was messing with me and I remember feeling sick,” Jacobs recalled. “When I got home, other things began happening. I remember riding my bike, and the pedals started skipping. I kept thinking it might have been the camel burger.”

It wasn’t the camel burger.

Other signs began surfacing to suggest something deeper was wrong. Jacobs began experiencing uncontrollable muscle spasms in his left leg. His girlfriend, Natalie Stevens, who he has a 3-year son, Nathaniel, with, began noticing strange things occurring to him, too.

“Danny kept saying he was feeling pins and needles on the bottom of his feet,” Stevens recalled. “We were wondering what was going on. About a week later, it turned into these jolts. His leg would just jerk, and from there, he wouldn’t be able to walk.”

Jacobs still persevered. He’d joke with Natalie showing her how he’d run, with his legs flopping around stiff. He saw a doctor who originally told him he was suffering a pinched nerve in his back.

Psychologically, Jacobs, a world-class 24-year-old athlete wasn’t willing to accept that anything was wrong. How could he run, and work out, how could he spar the way he did if something was amiss?

But the signs persisted and by early-April, 2011, Jacobs was bound to a wheelchair.

“I never knew the feeling of not being able to lift my leg; in my mind, I thought I was lifting my leg, and it didn’t work,” Jacobs said. “The weird part was there was no pain. My legs felt like pins-and-needles and it was more annoying than painful. I never got afraid, because everything just came so fast. I didn’t come to grasp all that was happening. It was like the Twilight Zone. I always thought I would eventually get over it.”

A few weeks later, by mid-April, Jacobs’ condition grew far worse. His godmother, Dorthea Perry, had been trying to reach to him. When Jacobs was unable to answer the phone, she came rushing over to his apartment complex and demanded the doorman to let her through. That’s the day Jacobs pulled himself on his hands and arms to answer the door.

Perry had seen enough.She summoned the strength to lift Jacobs, then about 180 pounds, on her lithe frame and Danny climbed the walls with his hands to throw himself on top of her to see a neurologist. Once the doctor saw the stricken Jacobs, a complete workup was immediately ordered.

“I was still oblivious to everything,” Jacobs said. “I was taking prescribed pills that I thought it would relieve the pain and heal whatever was happening to me. When my neurologist saw me, she knew something was wrong and I had to get an MRI ASAP. She knew it was critical and I had to take care of it.”

Jacobs was taken to Brooklyn Hospital for a battery of tests, which showed a massive tumor in his back.

“This thing was like an alien growing inside him,” Stevens said. “They had to do something fast, because the tumor wrapped itself around his spinal cord. It was weird, really scary because it was like feeding off of Danny, like it was taking away his life. It was like this thing wanted to kill him, and it had a motive and was growing and growing. It was growing so rapidly, they had to operate. He was looking at possible brain damage if it continued to grow. It’s why Danny caught everything by the skin of his teeth.”

When the news was put to him, Jacobs wasn’t thinking about his life. He was immersed in something else.

“The doctors told me I have a mass in my backÔÇöand the first thing I thought about was boxing, my career was over; that’s when I started to get scared,” Jacobs said. “The tumor was slightly smaller than a baseball, and it was growing like tentacles around my spinal cord. I had no feeling whatsoever from the waist down.”

On May 18, 2011, at NewYork-Presbyterian Hospital, Jacobs underwent surgery to remove the mass, which he eventually found out was cancerous.

As Jacobs underwent the six-hour surgery, Stevens was beside herself. She was getting anxiety attacks every other hour. She didn’t want to go home. She wanted answers. The doctors always wore a blank expression.

“I didn’t want to leave, because I felt something was going to happen,” she said. “It kind of felt like a movie. The doctors came out and said it was a successful surgery and everything went fine. But when I went to see him in the recovery room, Danny was so swollen, I guess with all the fluids that they put into his body, that I didn’t even recognize him.”

Natalie whispered his name. Danny’s bloated eyeballs rolled around trying to pinpoint the familiar voice. Once they got in eye contact with each other, the couple cried. After a few hours, the swelling in his hands and face receded. He began looking like himself. 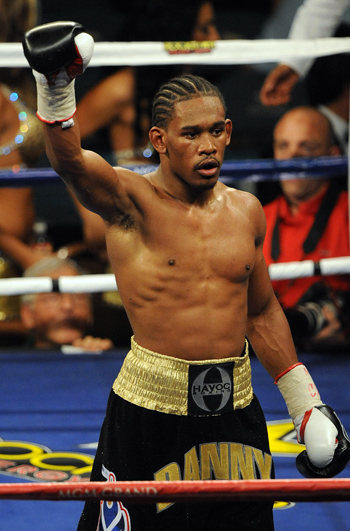 “Everything went beautifully for him, he was so ahead of schedule of his post-surgery recovery, they said he couldn’t eat any solid food, and Danny was eating the vegetables in his soup two hours later,” Natalie said. “They said he couldn’t move his bowels, but now, Danny said he had to go to the bathroom. They all wondered if he just got out of surgery or not. He broke all of the rules. I started calling him this little name, ‘Miracle Man.’ They said he would never be able to walk the way he used to, or to box again.”

During his recovery Jacobs would occasionally ask, “Why me, why now?” He was working with Roach. He signed with Al Haymon. He was being moved. He felt invincible again. Then this.

“It tests you,” Jacobs said. “There was a lot of frustration and anger. Unfortunately, we take things out on the people closest to us. Natalie took a lot. But she understood it was me getting out of my pain. She was my backbone and my godmother Dorthea played a major role, there every day with Natalie, believing in me. Oh, I kept asking ‘Why me?’ You second-guess things, but I still had my faith and belief that I would beat it.”

Gradually, painstakingly, Jacobs did. At first, he had to be helped doing everything, from bathing to going to the bathroom, to eating. There were a few lonely nights he laid in bed scared about his future. He wasn’t going to express that to Stevens. It’s the little things he began remembering. It was the thought of getting back in the ring that inspired him.

Now Jacobs finds himself an enormous inspiration to others.

“I cheated death,” he says. “This whole thing made me more hungry and appreciative of everything. Before this happened, people had to come and get me and beg me to do the things I had to do, like running, and training. It’s why I can’t play around with this. It’s like a second chance. It’s this gift that can be taken away at anytime.”

It’s why Jacobs got choked up that day in front of the podium. Standing there at the podium was the culmination of a long, long road.

“It hit me there at the press conference, because I remember always lying in that bed and missing being in the ring, and the boxing world; I missed all of those things,” Jacobs said.

“I breathe a sigh of relief that I’m allowed to return to one of the things I love the most. And when Natalie’s name came up during the press conference, that hit meÔÇöand all the things she had to go through, like feeding me, helping me go to the bathroom. She’s a life saver. I can’t remember all of the things she did, because she did so many. I tell her she fought cancer, too. I couldn’t have made it without her. There were days when she didn’t want to leave the hospital. She went through this as much as I did. She’s my superwoman.”

A five-inch scar runs down Jacobs’ back from the surgery. He’s able to turn around and touch it. He played with the idea of getting a tattoo placed over it, but thought otherwise. It’s his battle scar. His badge for the world to see he’s back.

“I used to care about legacy and being the greatest boxer of all-time,” Jacobs said. “I don’t care about being the greatest anymore. I still want to win, but if I can change someone’s life with my story that means more to me than anything boxing can do. One day I’d like to make a movie and write a book about my life. I used to ask ‘Why me?’ Now I’m like, ‘Yes, me!'”