Most hardcore boxing fans are aware that some of the best lighter-weight fighters in the world are from Japan.

They also know that world-class Japanese boxers above lightweight are extremely rare.

Those who tune into Fox Sport Net or Fox Deportes on Saturday night might get to see one in the main event of a Golden Boy Live! card at the Memorial Auditorium in Sacramento, Calif.

Toshihiro Kamegai, an undefeated welterweight from Tokyo, will face Jorge Silva in the scheduled 10-round headliner of the show (10 p.m. ET/ 7 p.m. PT).

It looks like a good matchup on paper, but even if Kamegai (21-0, 18 knockouts) stops the 20-year-old Tijuana prospect as he has most of his opponents – including one referee – the jury will still be out if the 29-year-old boxer-puncher is worthy of contender status at 147 pounds.

However, one thing is clear about Kamegai: he wants to prove himself at welterweight as evidenced by his willingness fight in the U.S. to fight and the selection of his opponents.

His U.S. debut, which took place on the Toshiaki Nishioka-Rafael Marquez undercard last October in Las Vegas, was supposed to be against fringe contender Jesus Soto Karass – a hard assignment for any 147-pound up-and-comer. However, the hardnosed Mexican veteran pulled out of the match and Kamegai wound up facing tough journeyman Hector Munoz, who he broke down to a sixth-round TKO.

Munoz wasn’t who Kamegai wanted to fight and the Japanese standout was less-than-satisfied with his performance, which was part of the Fox Sports Net broadcast. 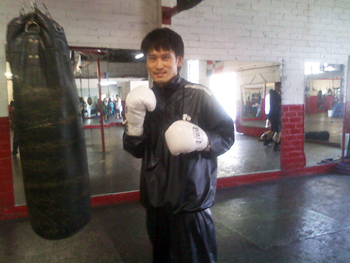 “It was momentarily stressful for me when I learned that Soto Karass withdrew from the fight,” Kamegai told RingTV.com through translator Nobu Ikushima after a workout at Azteca Boxing Club in Bell, Calif., on Thursday.

“In Japan, it is very rare for an opponent to pull out of a fight once a bout has been made so there was some panic. It was my first fight outside of Japan and I knew I would already be dealing with jet lag, a different climate and different rules, so it bothered me, but only for a short time. I was fine once I was in the ring although it was not one of my better fights. I made some mistakes and my conditioning could have been better.”

Kamegai, who says he compiled a 57-12 amateur record that included 32 stoppages, did well enough to impress the American broadcasters – Rich Marotta and Barry Tompkins – who called the Munoz fight but he says he will look better on Saturday.

“My conditioning is much better for this fight,” said Kamegai, who has an economics degree from Teikyo University in Tokyo. “I trained very hard in Tokyo. With stronger legs I will be able to do more of things I wanted to do against Munoz.”

Kamegai is confident that his style will overcome Silva’s youthful enthusiasm.

“I’m aggressive but I’m also confident in my defense,” he said. “You can say I’m defensively aggressive. I’ve taken many aspects from many great fighters to develop my style, including the prime Roy Jones Jr., Marco Antonio Barrera and Hozumi Hasegawa. I don’t fight exactly like them but I try to do some of the things they did in the ring when they were at their best.”

With those elite role models one would assume that Kamegai aspires to be the first Japanese boxer to win a major welterweight title, but the Teiken-promoted fighter will only speak of realistic short-term goals for now.

“I want to be impressive enough (on Saturday) to fight in the U.S. again,” he said. 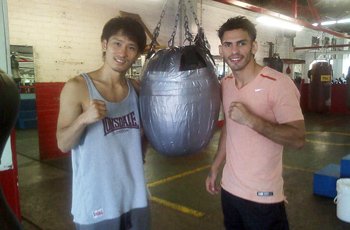 In the co-featured bout of the broadcast, two-division titleholder Jorge Linares will face Hector Velasquez in a scheduled 10-round lightweight bout. Although Velasquez (52-17-3, 35 KOs), a 37-year-old journeyman from Tijuana, has seen better days there are people on Linares’ team who are nervous for the 27-year-old former featherweight and 130-pound beltholder going into Saturday’s fight.

Off the record, one of Linares’ cornermen said the talented Venezuelan boxer had to win and look good against Velasquez in order to keep his career alive.

That’s because Linares (31-3, 20 KOs), once touted as a can’t-miss future star, has lost his last two bouts by knockout. And while it should be pointed out that both stoppages – an 11th-round TKO to Antonio DeMarco last October and a second-round TKO to Sergio Thompson in March – were due in part to bad cuts Linares suffered, it also has to be stated that he was a big favorite in both bouts.

He outclassed DeMarco over the first half of their WBC title bout until terrible cuts were opened up on his face and his defense deteriorated in the late rounds. He rocked Thompson in the first round of their fight, but was dropped in round two before referee Bill Clancy stopped the bout due to a cut on his left eyelid.

Linares, who lives and trains in Japan, accepts the loss to DeMarco, but he dismisses the Thompson upset.

“That was a crazy fight and the referee’s decision was crazy,” Linares, who is fluent in Japanese, said through Ikushima. “I thought I was fine in the second round. I could have continued and I think I would have won but I’ve put it all behind me.”

Linares, who returned to original trainer Sendai Tanaka in Tokyo after training with Freddie Roach in Hollywood, Calif., for the DeMarco and Thompson fights, says he just wants to get back to his winning ways.

“Everybody I talk to is concerned about me and worried about this fight, but I’m comfortable and confident,” he said. “I had real good sparring in Tokyo and before I returned to the Teiken gym I had a 10-day running camp in Narita. I ran 12 kilometers in the morning and 15 kilometers in the evening every day in a hot climate, so I know my conditioning is there.

“I just have to be careful about headbutts in this fight because Velasquez is an awkward fighter.”

Although he’s lost most of his bouts against world-class fighters in the past 10 years, Velasquez has always been a difficult opponent, even against monsters such as Manny Pacquiao and the late Edwin Valero. The veteran has gone 1-1-3 in his last five bouts since being stopped by Valero in late 2009, but he was competitive in his decision losses to Vitali Tajbert (19-1), Mahonri Montes (21-0-1) and Mickey Bey Jr. (17-0-1), who he dropped.

None of that bothers Linares.

“I’ve got the speed, the combinations and the technique to beat him,” he said. “I’m not looking for the knockout but I think I can put him away in five rounds.”

Linares, who said he would like to fight in Venezuela sometime in December, is confident of victory, even if he suffers a bad cut.

“If I get cut it’s not going to be a traumatic experience for me,” he said. “Everybody gets cut in boxing. Worrying about doesn’t help.”

The Azteca Boxing Club, where both Kamegai and Linares shook out on Thursday, has been a busy gym lately.

It’s the home gym of IBF lightweight titleholder Miguel Vazquez, of Guadalajara, Mexico, who is currently preparing to make the fourth defense of his belt against Marvin Quintero on Oct. 27 in Verona, N.Y.

Alvarado’s and Vazquez’s bouts are part of HBO broadcasts.

If the fight is finalized, it’s a fascinating matchup.

Martinez (18-0, 15 KOs), the 20-year-old brother-in-law of former two-time welterweight titleholder Antonio Margarito, is a pressure-fighting volume puncher in the mold of Margarito, who also manages him.

There are also story lines to go with the bout.

“‘Little Cobra’ knew ‘Little Tornado’ way back when they were just toddlers,” said Mota. “Margarito and Cobrita (Gonzalez) both used to be trained by Javier Capetillo at the L.A. Boxing Club and they remember each other from the gym.”