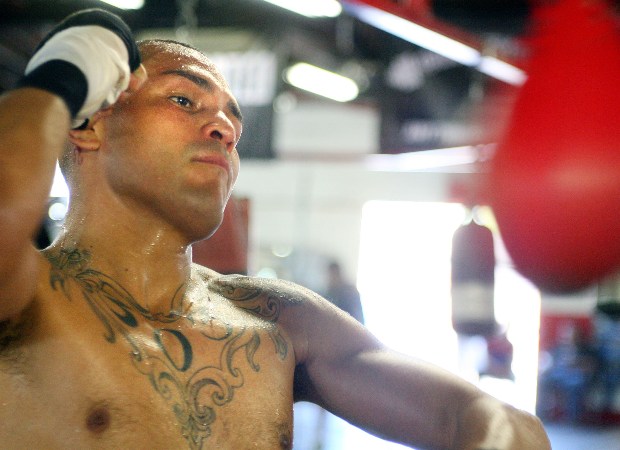 In late August, when Denver-based junior welterweight Mike Alvarado began training in Bell, Calif., for his 140-pound bout against former WBA lightweight titleholder Brandon Rios on Oct. 13, the fighter did so to escape the “distractions.”

“Just to kind of get my mind away from everybody. Family, friends, everything. I don’t want no distractions at all,” said Alvarado, who will meet Rios in an HBO-televised clash of unbeatens at The Home Depot Center in Carson, Calif.

“I just want to be into my fight and into my training and to get my training down to a tee, and to make sure that I’m focused on everything that I have to do for these next big fights that are coming up in my career.”

Nicknamed, “Mile High,” Alvarado (33-0, 23 knockouts) wound up also avoiding what was likely a chaotic, if not historic Wednesday evening in his home town, where the University of Denver played host to the presidential debates between Democratic President Barack Obama and Republican rival Mitt Romney.

“I heard all about it. I seen it all over Facebook, Twitter and everything. You can’t really get away from all of that,” said Alvarado, a former two-time Colorado state champion wrestler. “I read up on it a little bit, but I’m glad that I was out here and away from all of that stuff. It was crazy.”

Rios (30-0-1, 22 KOs) has promised that his bout with Alvarado will be “a very violent, very bloody fight,” one he believes will invoke memories of Arturo Gatti’s trilogy with Micky Ward and the Diego Corrales-Jose Luis Castillo 2005 Fight of The Year.

“I anticipate a good, solid performance and a great fight. I know that it’s going to be a very entertaining fight for the people and a very good fight for me and Brandon,” said Alvarado, who believes he will be the first man to score a knockout against Rios.

“We’re going to do what we plan to do, and that’s to get in there and fight to the finish and to the end and to victory. I know that it’s going to be a great, thrilling, non-stop fight, so I’m ready for it and can’t wait. I’m excited.”

Rios-Alvarado takes place on the HBO-televised undercard of a main event matching Nonito Donaire (29-1, 18 KOs) against Japan’s Toshiaki Nishioka (39-4-3, 24 KOs), THE RING’s No. 3 and No. 1 junior featherweights, respectively, in what will be a 122-pound championship bout.

McNemar is coming off his lone defeat by unanimous decision against unbeaten Ryan Coyne in June of last year. Flores, meanwhile, scored a sixth-round stoppage over Hugo Pineda in January.