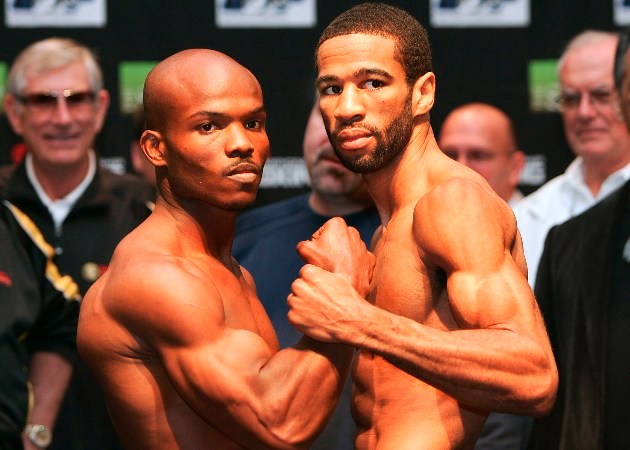 Top Rank CEO Bob Arum said contracts have been sent out to the camps of WBO welterweight titleholder Tim Bradley and IBF junior welterweight beltholder Lamont Peterson for a potential HBO-televised bout from Marlins Park in Miami, Fla., on Dec. 15.

“It would be a fight for the WBO welterweight championship,” said Arum. “We’ve sent contracts out, but it’s not a deal until it’s a deal.”

Peterson (30-1-1, 15 knockouts) is 3-0-1 with two knockouts since falling to Tim Bradley by unanimous decision in December of 2009, and is coming off a disputed split-decision that dethroned Amir Khan at the Washington Convention Center in December.

Bradley (29-0, 12 KOs) is coming off a controversial split-decision in June that dethroned Manny Pacquiao as the WBO’s 147-pound titleholder and ended his 15-bout winning streak that included eight stoppages.

Pacquiao has chosen to take a fourth fight with four-division title-winner Juan Manuel Marquez over a rematch with Bradley. In November, Pacquiao won an unpopular and highly-disputed majority decision over Marquez, who has also battled Pacquiao through a draw and a split-decision loss previously.

Arum’s assertions come in the wake of Head Bangers Promotions — headed by Cologne Hunter — having bid an IBF minimum $50,000 to win Tuesday’s purse bid for the right to promote a bout between Peterson and mandatory challenger and ex-beltholder Zab Judah.

Cologne Hunter is the wife of Peterson’s manager and trainer, Barry Hunter.

The IBF allowed Peterson to retain the belt he won from Khan after a review of his medical records by organization-appointed doctors ruled that the testosterone discovered in Peterson’s failed drug test in March was not at a level that would enhance his performance.

Peterson had claimed that it was for medical reasons that he had a testosterone pellet surgically implanted into his hip by Las Vegas-based Dr. John Thompson in November after breing diagnosed with an abnormally testosterone level.

Asked if he thought Peterson would have a problem being licensed by Florida’s state athletic commission, Arum said “no.”

“We’ve been told no,” said Arum, “that it won’t be a problem because he’s licensed in Washington, D.C.”

IBF Championships Chairman Lindsay Tucker said Peterson and Judah (42-7, 29 KOs) “have 90 days to make the fight, which comes out to, I think, Jan. 2, 2013,” and “they’ve got 15 days to get us the contracts.” The purse split for a Peterson-Judah bout would be “75-25 in favor of Peterson because he’s the champion,” said Tucker.

If it happens, Hunter’s publicist, Andre Johnson, said the clash with Judah, an ex-welterweight champ and junior welterweight titleholder, is being targeted for Peterson’s native Washington, D.C.

Judah could not be reached for an immediate comment.

Also expected to be on the card is WBA junior featherweight beltholder Guillermo Rigondeaux (10-0, 8 KOs), who extended his contract with manager Gary Hyde for three years through Sept. 15, 2015, according to Hyde’s lawyer, Patrick English.

Although Rigondeaux still is considered a free agent in the wake of his HBO Pay Per View-televised unanimous decision victory over Roberto Marroquin on Sept. 15, Arum is “still working on finishing up” a deal that will allow his company to promote the two-time Olympic gold medalist.

Rigondeaux vanquished Marroquin on a card that was promoted by Top Rank and whose main event featured a unanimous decision by RING middleweight champion Sergio Martinez over Julio Cesar Chavez Jr. at the Thomas and Mack Center in Las Vegas.

Rigondeaux-Marroquin happened after English, the attorneys for Top Rank and Rigondeaux’s lawyer, Guy Spiegelman, reached an out-of-court agreement in spite of an injunction which had prevented Rigondeaux from facing Marroquin

A written order from Miami-Dade County judge David Miller had forbid Rigondeaux from facing Marroquin, but Hyde granted his blessing a few days prior to the fight, having worked out satisfactory terms with Top Rank lawyer David Marroso, a senior attorney with the Los Angeles-based O’Melveny and Myers law firm, and Spiegelman.

“We’re still working on all of this,” said Arum. “Nothing is finalized.”